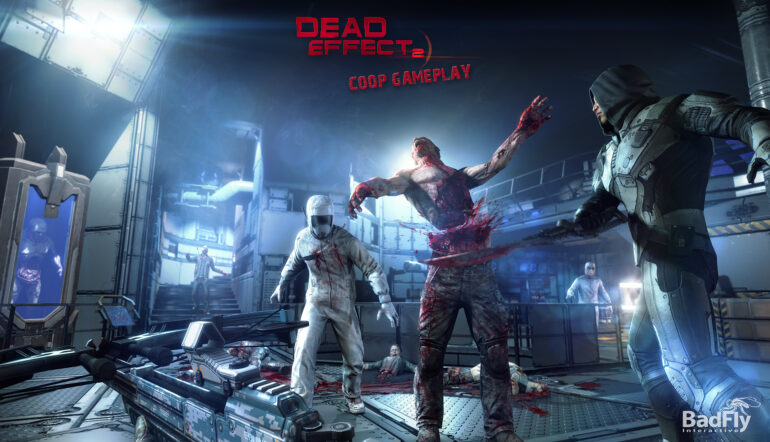 Dead Effect 2, the sequel to Dead Effect, originally a mobile phone app, is apparently on the PC now. In my honest opinion, that would be a really ambitious thing to do. Bringing a mobile phone game to the PC seems like a really big risk (considering the amounts of players judging a game by its graphics), but what seems to be a big step for BadFly to turn the app into a PC game, they did not fail to deliver. Dead Effect 2 took a really noticeable graphical update from its app form, harnessing the power of 4K, giving the game an advantage in attracting gamers to play, and letting players who’ve already played Dead Effect and Dead Effect 2 on the mobile app appreciate the change they’ve done to the game.

You play as an enhanced human with a variety of skills and abilities to be upgraded later in the game. Boarded inside the ESS Meridian, you take control on one of the three selectable characters – Gunnar Davis, a heavy weaponry specialist, Jane Gray, a chick who uses shotguns, and Kay Rayner, a master of bladed weaponries. You wake up upon being experimented by scientists, immediately forming an alliance with Danette, another human that was experimented on, as she guides you to her and asks for your help so that you, along with other survivors (to be teamed up later in the game) can survive against the harsh occurences happening inside the ship. 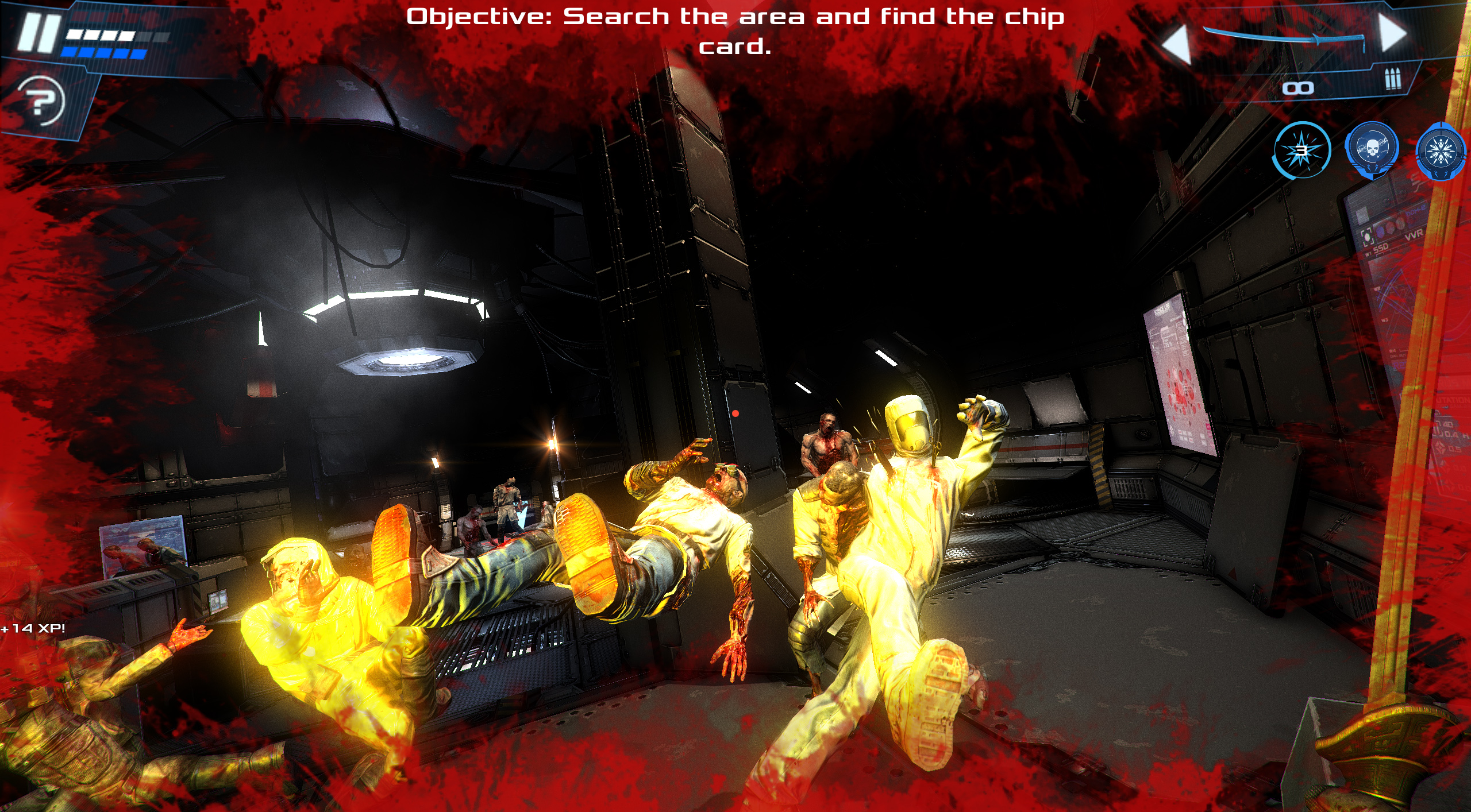 Now, there’s a significant number of things you’d be able to notice in the game. First and foremost would be the game’s set mouse sensitivity. That thing’s way off the charts. You move your mouse a little bit then bam, you’ve made a complete 720 – degree spin. It could be adjusted in the options, though, but still, a pre-set to a moderate sensitivity would most definetely be a good help. Also, the way the characters do their dialouges also sort of bugs me, since it sounds kind of forced. It’s as if you’re listening to a high school drama on stage, with the performers reading their scripts and putting fake emotions.

Anyway, the graphics in the game is, surprisingly, really good and well done. Sure, there might be a lot of other factors that BadFly missed out, like interacting with the environment more often in a non-violent action (i.e. shooting/hitting orbs to gather it or breaking lockers to get its contents), but it was able to guarantee an environment where you’d be able to appreciate its “horror” genre. The game’s environment also has a striking similarity to Dead Space, from experiments going horribly wrong inside the ship (not in Dead Space, though, since it was an infection), to the grotesque and dimly-lit surroundings. Add a dimly-lit surrounding and scatter lots of dismembered bodies with blood splattered across the walls and floors, and there you have it: a perfect place for breeding flesh-eating zombies. 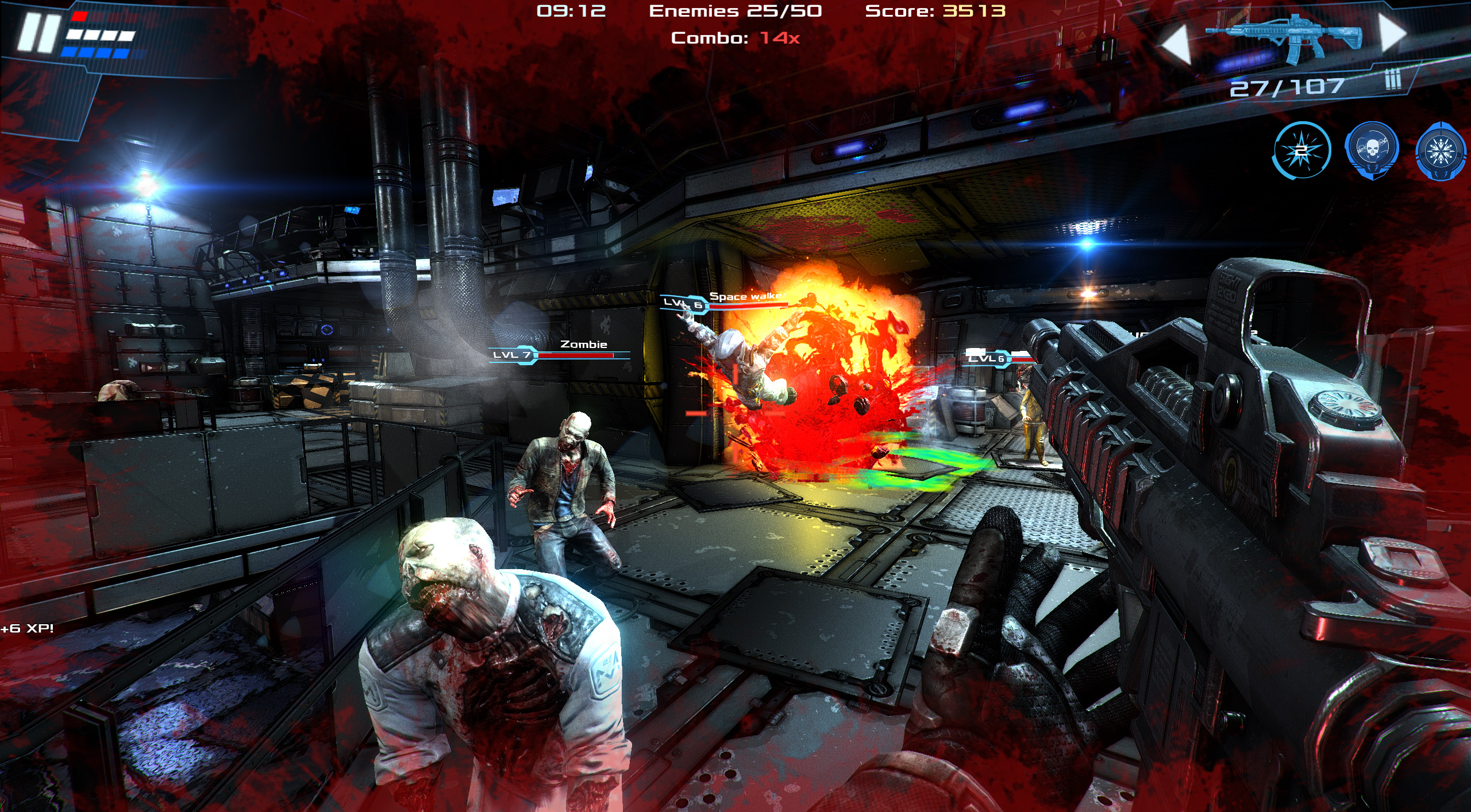 One thing I personally noticed in the game, though, is that it barely displays the keys needed to be pressed in order to do a specific action. Like at the beginning, where Danette asked you to put your thumb on a biometric scanner, it didn’t really displayed which key to press. So, you’ll have to either guess (which is what I did), or go to the menu to find out which keys to properly press. It’s quite understandable, though, since the game came as an app. Players who are into RPG can also appreciate the upgrade and buying system of the game, which is really simple to understand. Upgrade your skills, buy weapons and get superb armors. That’s one thing that I really liked in this game (since I’m a HUGE fan of RPG games).

Overall, Dead Effect 2 is an enjoyable game to pass your time. The story isn’t really that great, with the same cliché story like Resident Evil: Operation Raccoon City, or Dead Space, but what it lacks in story, covers up with its fun and enjoyable gameplay.

The review is based off from the copy provided by BadFly Interactive.