Death Stranding – A Game That We Should All Be Excited For? 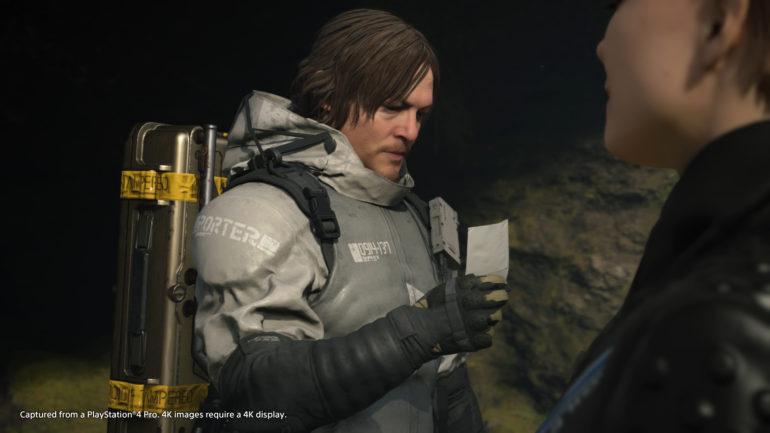 When Death Stranding was first announced way back in E3 2016, nobody quite knew what to make of it. Heck, we still don’t know everything that pertains to the game itself – to this day. And yet we are just a couple of weeks until the game’s release. We have the odd teaser here and there from the main man himself, Hideo Kojima. But it seems like every reveal is often accompanied by a new set of questions. Though it never hurts to know more, it’s worth noting that this one game, in particular, is being set up as the next big thing in gaming, or so we would like to believe. That begs the question, “Is Death Stranding a game we should all be excited for?”

Before we answer such a question, why don’t we go back to the beginning and talk about where it all started. That one trailer that introduced us to the world of Death Stranding… particularly, the appearance of the enigmatic Bridge Baby.

When I first saw the first trailer back in 2016, I was not expecting the inclusion of the baby. Norman Reedus, sure. We were all banking on that collaboration to happen ever since the ill-fated Silent Hills demo not too long ago. Going back, never in a million years would I associate a blackened and dying beach with a baby. Stranger still is Norman’s connection to the poor thing. He’s obviously feeling pain, as though something happened to the baby, but we don’t get to know more as the baby disappears. In its place, a black substance and hands prints moving across his body. The last thing we see is 5 mysterious floating figures in the air. Then the scene cuts. If that doesn’t bring up the hype, I don’t know what will.

From that first trailer alone, we have glimpsed into a world never been seen in the realm of games. It’s so out there, that the idea itself turns heads in a way no other game can claim to do. Over the years, we did get more of an idea of what state the world actually is. We know that the world as we know it is no more and that people go between dimensions. For what reasons, we don’t know yet.

There is another parallel world that resembles WW1 – albeit full of darkness and filled to brim with a mysterious black substance. We know that what’s left of America is now known as the United Cities of America, whose president entrusted a mission for Norman’s character to accomplish. And finally, we have the weird guys with the shock sticks who are hell-bent on stopping Sam (Norman Reedus) from reaching delivering his package. There are many finer details involving characters but that requires an entire article in and of itself. Let’s leave it at that.

I will say this though about the characters – I can’t wait for Troy Baker to match wits against Sam as Higgs, the “Man in the Golden Mask”. There’s no doubt that Troy’s going to knock it out of the park with this performance. He’s already a staple in Kojima games, having voiced Revolver Ocelot in Metal Gear Solid V: The Phantom Pain. I am also looking forward to Geoff Keighley’s role in the game as well. He’s hosted some of the industry’s highest-profile events, I’m curious as to what he’s capable of portraying beyond the stage. And finally, there’s Amelie, portrayed by the multi-talented Emily O’Brien. These guys may not have the sort of name recognition as someone like Mads Mikkelsen or Guillermo Del Torro, but they are well-known names in the industry. All in all, it’s an epic and props to the team that brought them together.

Now that’s we’ve talked about some of the things surrounding the game, let’s get to the heart of the game itself, the gameplay.

In one of the tweets that accompanied a trailer for the game, Hideo Kojima told fans that:

People have built “Walls” and become accustomed to living in isolation.

“DEATH STRANDING” is a completely new type of action game, where the player’s goal is to reconnect isolated cities and a fragmented society. All elements, including the story and gameplay, are bound together by the theme of “Strand”, or connection.
As Sam Porter Bridges, you will attempt to “Bridge” these divisions, and in doing so, create new bonds or “Strands” with other players around the globe. Through your experience playing the game, I hope you’ll come to understand the true importance of forging connections with others.

And that’s pretty much the bare-bones version of what Death Stranding actually is. The themes run deep and the characters, even deeper. Seriously though, if it weren’t for the internet and its dedication to keeping up with everything about the game, I would have no idea how and where to start unraveling the story. Although, Kojima did admit that the first time the team heard about his plot for Death Stranding, they didn’t understand much of it. If they don’t get it the first time, what does it say about us regular folk? Btw, these are the people who probably have a firm grasp on Metal Gear and its plot. Probably.

From what we’ve gathered from trailers and the like, we will have access to an array of gadgets such as ladders and climbing anchors. We can assume that exploration plays a huge part in the game, second only to the primary objective, that is connecting cities AND people to each other. The connection aspect is further enhanced by the fact that NPC’s remember the player’s actions throughout their playthrough. Looks like there will be consequences to at least certain actions.

Speaking of which, it seems like the game handles death in the same way. When a player dies, they leave behind this crater that’ll become a permanent fixture on the map. Depending on the kind of player that you are, you will either leave a small number of craters or lots of them. In the death state, the player goes into a purgatory-like world – a product of the dimension crossing Timefall. Regardless of how it ultimately plays out, it seems like even death plays a part in the overall experience.

But what about the Bridge Baby, you might ask? To put it simply, they act as a connector between the world of the living and of the dead. Should the player die, he travels to this world and they are able to make changes in that world. These changes will have an effect on the living world, so keep that in mind. Babies also run the sensory equipment on Sam’s shoulder that allows him to detect the invisible BT’s. All that power requires charging at some point, and that’s where the “Still-Mothers” comes into play. Essentially, still-mothers recharge the babies and transmit updates from the Chiral Network to them. If this is from any other game, I don’t think I would take it that seriously.

As for the kind of value one would expect from the game, here’s a little something from one of his latest interviews during Tokyo Game Show 2019. In it, Kojima likened the game to the Alien movie, implying that it’s going to be a slow build-up until the second half of the game. Past that point, however, Kojima describes the game as “really fun.” I don’t know what that means yet, but seeing how seriously fun Metal Gear V got past a certain, I’ll just have to take Kojima’s word for it.

Actually, this whole new game genre that Kojima’s putting together may not be everyone’s cup of tea. But there’s no denying that it’s already reaching cult status even before release. Which worries me, somewhat. To be honest, this reminds of a time when George Lucas showed us the Star Wars Prequels. I sort of remember the hype that went with the first movie… most of which was by the association to the original trilogy. By the time moviegoers got a handle on what Episode 1 really was, there was already a divide forming within the audience. I don’t think that might happen to Death Stranding, but until the game is out in full, there’s no way to properly gauge the reception of the product.

And that about wraps this up for this article. If you are to ask me, right now, if this game is something I would be excited for? Yes. Absolutely. I was hooked on the idea the moment it started showing on stage for the first time. And every reveal since then just served to fan the flames. And though I may have some reservations about the hype surrounding the game, I remain hopeful that it leaves its mark on gaming history like many others that came before it. I hope this

If anything else, I hope this article paints a better picture of what Death Stranding is all about. I know it’s not going to be everyone’s cup of tea. It certainly ranks up there in terms of confusing alongside Metal Gear Solid’s conspiracy plot lines. Hopefully, that turns out to be a good thing. That’s it, that’s all. Let us know what your thoughts are on Death Stranding down in the comments section below.