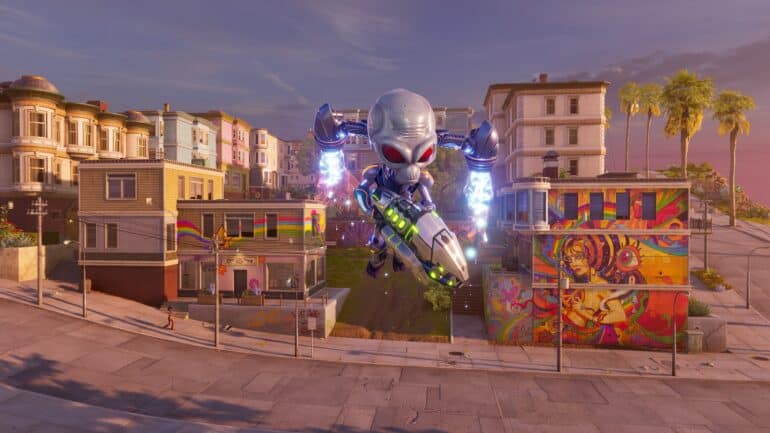 The sequel to the popular video game Destroy All Humans! is finally getting a release date, which is on August 30, 2022. Crypto is coming back to Planet Earth to finish what he has started, but it will not be the original version, it will be Cryptosporidium 138.

Destroy All Humans 2 Reprobed is a faithful remake of the most acclaimed entry in the fan-favorite Destroy All Humans! franchise. Crypto 138 comes back with a large arsenal of weapons and can explore five huge open-world areas, which are Bay City, Albion, Takoshima, Tunguska, and the Moon.

Traverse Lands with Hoverboard and More

This will be set in the 1960s and all the Hippies, KGB and other threats will be here to hinder Crypto. He can use his jetpack to roam around large areas. He can also use other accessories like his hoverboard and the flying saucer. The latter will have its own arsenal of powerful weapons as well. The saucer has a new update, which is the ability to abduct humans in certain numbers and unlock new skills with it.

How Much is Destroy All Humans 2 Reprobed?

Pre-Order to Get Clone Carnage Right Away

Pre-order the digital version of the game and get the multiplayer, stand-alone spin-off Destroy All Humans! Clone Carnage right away. In Clone Carnage, 4 players can wreak havoc online or 2 players can destroy in local multiplayer. Clone Carnage is also available for separate purchase on PC, PS5, PS4, Xbox Series S/X, and Xbox One at an SRP of $ 12.99.