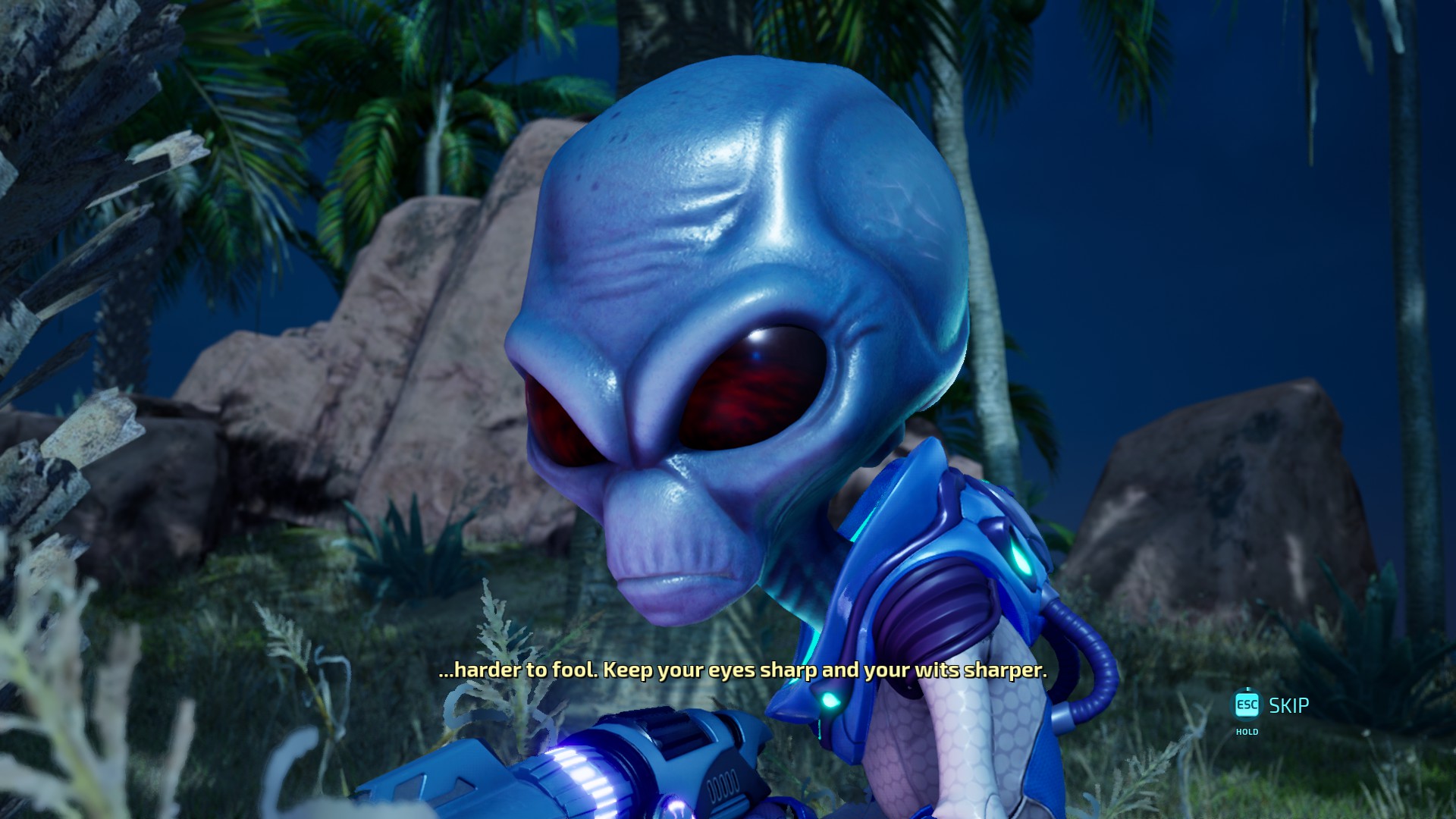 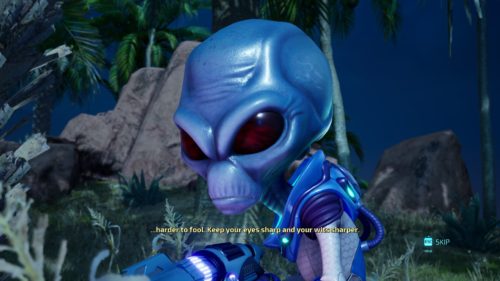 I still enjoy playing the remake of Pandemic Studios’ hit cult-classic, this time without the worry of getting caught playing past 11 PM. A new fresh coat, improved audio quality, updated HUD, you name it. Much like other faithful remakes, Black Forest Games’ manages to still capture the essence of the original, and they did a wonderful job doing it.

Destroy All Humans is still a witty, fun, cheesy, and now a visually beautiful game to play this year.

The game is set in a peculiar fictional Earth in the year 1950s. After Crypto-136 crash-landed on Earth, then getting captured by humans, it’s up to you, as Crypto-137, and the mastermind alien, Pox, to investigate the incident, rescue the captive Furon friend, and study humans by harvesting their intact brainstems. After being sent to Earth, you are then greeted by silly, easily manipulated ignorant humans lifeforms, and a secret organization – Majestic, that pretty much looks like the Men in Black, who wants to capture and kill you.

The story wouldn’t hook you with something compelling but Destroy All Humans does a great job in pulling off a satirical written narrative about the 1950’s American politics, conspiracy theories, and throwing puns at, somewhat, relevant social issues. You get to have a great laugh, but at the same time, making you open your eyes to how relatable the points can be.

Keeping the gameplay truthful to its original, added minor gameplay mechanics are indeed welcomed. New kinds of equipment were added like the Dash Booster and Supra Kinetic Antigrav Thrust Enhancer (SKATE) to add a little bit of depth in gameplay, giving Crypto the ability to be more agile.

The Saucer is also your go-to-vehicle for giving a deathly blow to enemies and structures with the death ray and even the hilarious Abduct-O-Beam to lift people, cars, objects then slingshot them at targets. The weapons, especially the Saucer capabilities, still feel as if they were new and the satisfying feeling you get in combat delivers what it means to destroy humans.

Things have also improved with the game’s controls. Maneuvering the Saucer is easier, the clunky movements of Crypto are now refined. Everything works well in the remake thus giving a better experience to both fans and newcomers.

Missions are separated by locations similar to the original. You can still go back to them to complete other challenges like searching for Furon Probes and races.

Completing these optional objectives and challenges, and getting 100% rewards you with classy Crypto skins like the Classic Crypto and the Cow-themed skin called the M00tant, and as well as artworks that shows the visual improvements done for the game.

It’s fun doing these challenges if you’re a completionist, but they are still not enough to get everyone coming back for more aside from getting those amazing looking skins.

Enemies, while still mindless lifeforms have grown in numbers and made battles more engaging. They keep coming and coming when the alert levels go high thus making the battles even more intense. So if you want to do some sightseeing, you need to at least look like a human to roam around the streets safely. This is where the alien tech comes into play.

You still have a couple of abilities from making objects fly with your psychokinesis abilities, mind-controlling enemies to fight and protect you, to imitate what a human looks like, the Holobob.

The Holobob is one ability I love most. You get to infiltrate and explore without any means of a threat. One thing they’ve actually improved is when your Holobob is running out of energy, your disguise will turn into an actual holo that slowly disappears, making it more apparent to know if you need to scan minds to recharge.

In the remake, certain areas will now be marked as restricted, and equipping the correct Holobob will avoid you getting caught and failing the mission. It gives a layer of challenge for the players, however, there are levels where this perfectly fits but was never added. Who wouldn’t be suspicious of a person wandering around a crime scene?

To add, psychokinesis controls are rather limited which is a big shame. You aren’t able to accurately throw any objects or human beings at enemies, even if you’ve successfully locked on to your target. You’re annoyingly forced to try it over and over again.

But other than that, the abilities work well and compensates one another. They’re all utilized in situations you best see fit and it doesn’t feel that you have to leave one weapon or ability out.

Destroy All Humans shines when in daylight. The vibrant, amazing looking vistas is a sight to behold. While character design seems cartoonish, these are expendable NPCs for your alien leisure. The biggest highlight is the improved aesthetic of Crypto-137, Pox, the Mothership, the Saucer, and more importantly the explosions.

Redesigned to fit this generation of games, the added level of detail Black Forest Games is gorgeously done. You can see the finer smoke, with buildings exploding into smithereens with its debris getting thrown everywhere thanks to its well-done physics.

From Crypto’s intricate modern design to the Saucers’ repainted visuals give that 1950s terrifying alien movie. The Destroy All Humans remake brings back what was a visually impressive game in its time into something more alluring.

There are quite a few bugs that existed in the original game that is also present in the remake. You have people not following you when hypnotized, times where you get caught unexpectedly by anyone while in Holobob. These aren’t game-breaking bugs, but it gets frustrating when you’re restarted at a significant point. Playing it on PC was a smoother experience compared to the PS4, which had inconsistent frame-pacing.

Forget about compelling storytelling, forget about being serious, Destroy All Humans is about having fun, being entertained, and giving you a nice laugh of it being satire and cheesy. This remake adds a layer of beauty and improvements, it’s another faithful recreation of an old game that invites newcomers to play what we consider to be a classic gem.

Destroy All Humans! – Review
Score Definition
When the issues of a game are rolled and stomped by its greatness, then it’s something to invest on if you have some spare.
Pros
Visually Impressive
Refined Controls
Still hilarious like the original
Crypto!
Cons
Minor bugs from the original still exist
Dialogue audio sounds dated if you listen to it closely
8
Great