Dragon Ball The Breakers Out Now 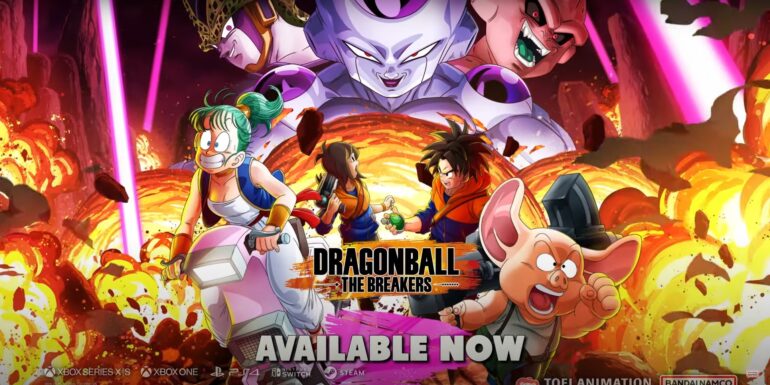 Dragon Ball The Breakers is an online multiplayer game that will pit the Survivors against the iconic Dragon Ball Raiders. These raiders are powerful villains that Son Goku and the Z Warriors have fought throughout the years, but now the Survivors, a group of ordinary beings will try to survive their onslaught and live another day.

A new trailer was released as well. It has also shown a sneak peek at the first new raider which looks like a Great Ape.

“DRAGON BALL: THE BREAKERS emphasizes intense battles where a group of players try to survive or take out a powerful Raider using wits, gadgets, and power-ups,” said Ryosuke Hara, producer of DRAGON BALL: THE BREAKERS. “With the ability to also select characters not typically found in DRAGON BALL games via the Survivor Skin system, players can look forward to a unique take on asymmetrical multiplayer gameplay that remains wholly authentic to the aesthetics and style of DRAGON BALL.”

Dragon Ball: The Breakers  comes in the following editions for all available formats:

Dragon Ball: The Breakers is an asymmetrical multiplayer game that pits seven Survivors, regular civilians trapped in a “Temporal Seam”, against a Raider, one of the famous rivals from the DRAGON BALL universe. The Survivors will have to team up to be able to escape their foe and come back to the safety of their world and timeline. The game shares the same universe as Dragon Ball Xenoverse and contain features that link Dragon Ball Xenoverse 2 and Dragon Ball: The Breakers.

Survivors are regular civilians that have been caught in a “Temporal Seam”, trapping them in a place where space and time are in disarray. The main objective of Survivors is to escape the Temporal Seam using various gadgets, the most valuable of which are Transpheres, that contain the souls of Super warriors and grant special abilities and powers when used.

Dragon Ball The Breakers will receive continuous support after release with seasonal new content and updates to delight fans. The game also has a free seasonal Dragon Tier pass that rewards players with free content as they play, which includes the Farmer survivor skin as this season’s Tier 50 reward.

Dragon Ball The Breakers is out now on PC, PS4, Xbox One, and Nintendo Switch.