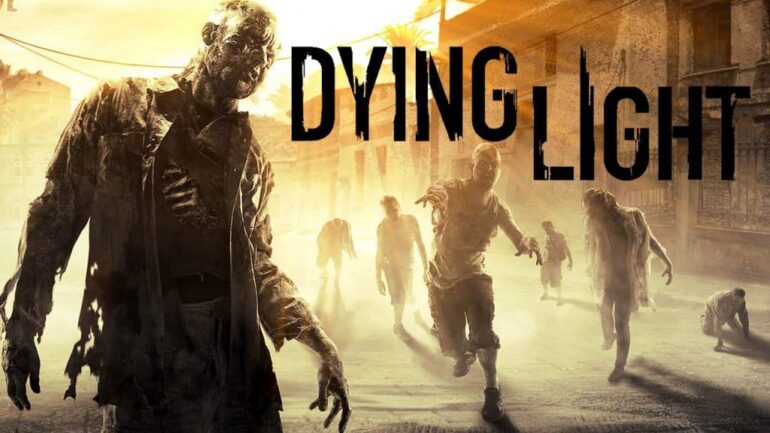 Zombie games are getting pretty generic these days but not for Techland’s Dying Light. After Dead Island’s massive disappointment, Techland redeemed itself by proving two things:  Parkour + Zombies is a combination meant to be dealt with. With the fluidity of Mirror’s Edge’s parkour system and Dead Island’s relentless open-world onslaught of the undead, there is no denying that Dying Light bites at the right spot.

The game starts off with your character, Kyle Crane. A representative of the G.R.E.(Global Relief Effort) to undergo a mission where he is going to retrieve a document worth procuring into the zombie-infested fictional city of Harran. He jumps off the helicopter and dove his way down but was ambushed by a horde of flesh eating zombies and got bit in the process. Luckily, a damsel not in distress took you out to safety. The game fades, and so it begins.

Waking up in an abandoned building is one small feat before relishing the graphical wonder of Dying Light’s visuals. After a series of fetch quests and a nifty tutorial, the game spirals into a whirlwind of dead and undead. 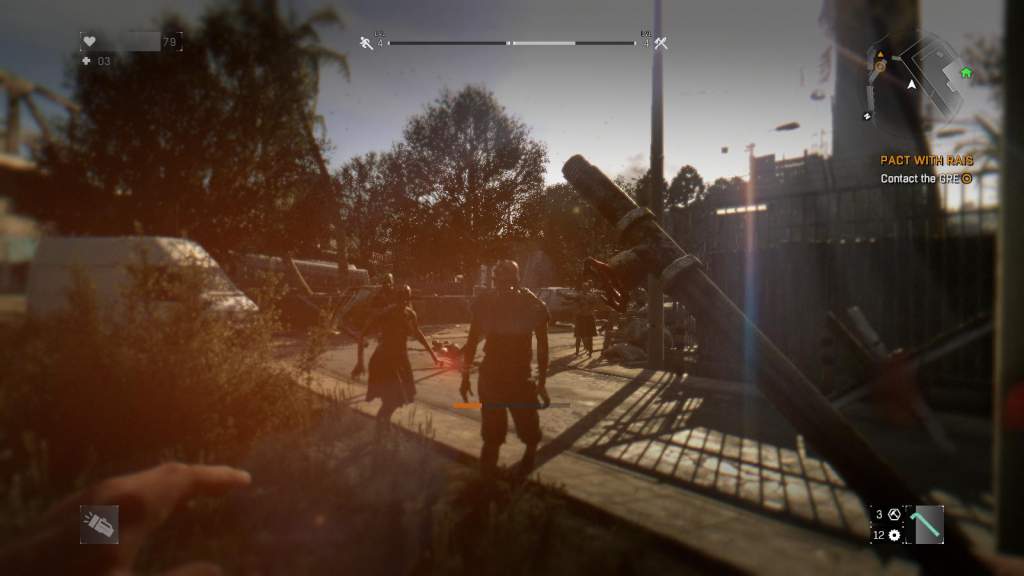 The controls in Dying Light are fluid. The feeling of running, jumping, swimming and smacking a zombie’s head is so satisfying. The addition of parkour makes the game all the more interesting as it lets you traverse the entire city of Harran with ease. However, the game controls can get clunky during the first time around. I remembered I fell down 6 times to reach an electric switch while climbing a pole. It was bad but I managed to adapt as the game progresses.

The gameplay is simple, yet fun.  Smacking a zombie’s head is so enjoyable and the slow-motion effects when landing a critical hit are visually satisfying. There are various weapons to encounter in the game such as Guns, Katanas and Shurikens. All of these can be upgraded with the use of Mods and they are the crafting system of the game. You will also be given 3 types of upgrade to increase your chance of surviving the quarantine: Fire, Acid and Bleeding. Fire burns, acid inflicts poison and bleeding increases the sharpness of your weapons.

Throughout the game, you will be presented with 3 types of skill sets as you level up: Agility, Power and Survival. Agility enhances your free running skills while power gives you an upgrade to easily eliminate zombies. Survival is the most important for it enhances your health and it has a cool ‘grappling hook’ upgrade. To level up skills, performing different tasks that correspond to a skill set is necessary. For example, running and climbing more increases agility and helping more survivors will increase Survival.

Multiplayer is also a deep aspect into the game. You can play up to 4 players online and slaughter your way through the streets of Harran. You can also become a ‘Hunter’ and invade a player’s game to kill survivors.

Facing the world of Harran during daytime is a charm. Zombies are fun to kill but they are pretty generic. It makes me feel uneasy to kill the same zombie model I killed not 5 seconds ago but after 3 hours into the game, I encountered new types of zombies and they are a force to be reckoned with. During nighttime, the game changes. Powerful and fast zombies called Volatiles are the new hunters and stealth is heavily required. Reaching a safe zone is important if you want to sleep the night off. This is the game changer of Dying Light, there is just so much difference between day and night cycles. It’s hunt or be hunted.

The city of Harran is hauntingly beautiful too. Light illuminates perfectly on every surface and shadows don’t mess up  the game while traversing in the city. Since this is an NVIDIA Powered game, they have provided a graphical setting where you can enhance the ambient occlusion and shadows to make it more realistic. AMD users, however, are having a bad time with its poor optimization. 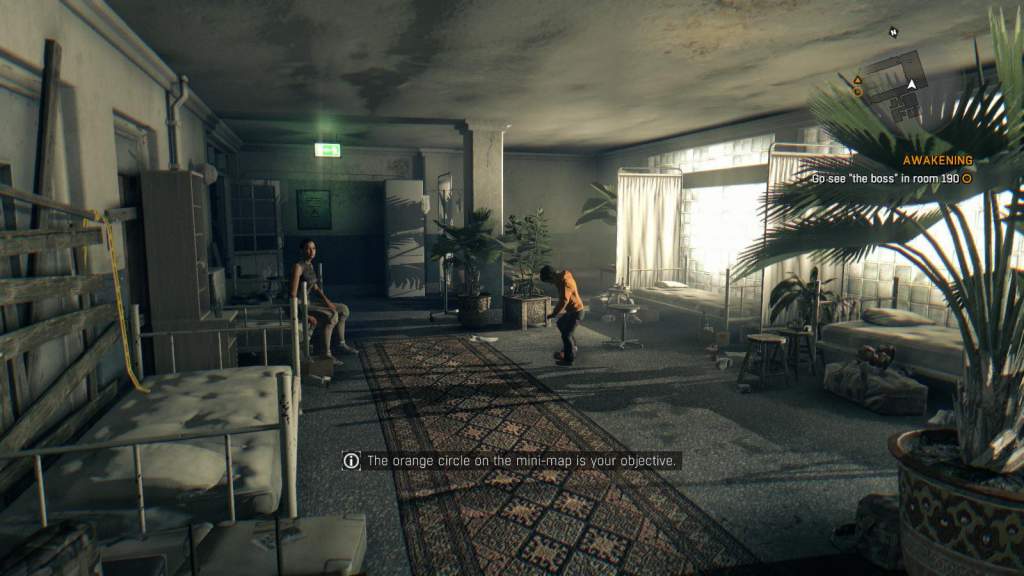 The sound quality in this game is near-perfect. The groans and screams of deadly zombies are enough to keep us on our toes and the game’s Bollywood-style OST makes us forget that Harran is a fictional city. Voice acting, however, is bad. The major character’s VA are okay but the rest are downright laughable with the bad lip-syncing.

Story is disappointing. The clichés are unbearable and characters are bland. It’s just not enough to satisfy myself into a zombie game. The only moment I cared during the story is when a major character died and  then I ignored the rest. Kyle Crane is also a generic protagonist with a sense of black and white for there are no moral choices and no heartwarming script. It’s just plain QTE’s and zombie-smashing.

Side-quests can either be a joy or a bummer depending on your play style. There are numerous of fetch-quests and challenges to keep the replay value up. Easter eggs are cleverly placed throughout the city of Harran. Dying Light is Techland’s way of saying “We’re back!” to the disappointments of Dead Island. It is also a visually beautiful zombie game that is battered by a weak story but rescued by an intricate day and night cycle and fluid parkour gameplay. If  you are a self-proclaimed zombie killer in an open world FPS game, then I bet this game is for you.

I finished the game at 34 hours just to complete every side-quests. The only reason I want to come back is to vanquish all the zombies I encounter.