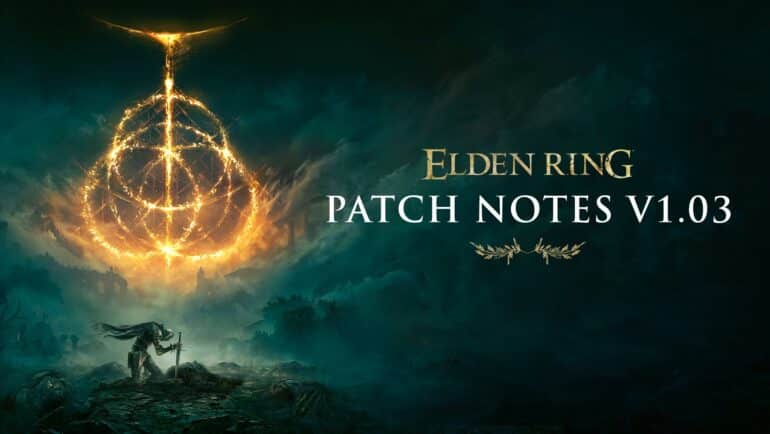 Bandai Namco Entertainment and FromSoftware has recently released the Elden Ring update version 1.03 today and it has a mix of improvements, additions, and nerfs.

Update version 1.03 was a rather large update to download with a size of 1.4GB on PS5, which should be similar with other platforms. This major update did a lot of fixes to the game, improvements, additions, and some game balances which unfortunately nerfed one summon and ability.

What are the Highlights for Additions?

The update added a new NPC called Jar-Bairn, which currently is a mystery as no one has been able to find this character yet. There are also new quest phases for some NPCs like Diallos, Nepheli Lous, Kenneth Haight and Gatekeeper Gostoc. Mimic’s Veil also got improved with more number of patters of objects to imitate.

What are the Highlights for Fixes?

One standout bug fix for the new update was a fix on a bug that sometime prevented the player from getting the item reward after a boss fight, which happened a few times for other players. They also finally fixed the bug that made some weapons not use stat scaling, which is quite helpful in increasing damage.

What are the Highlights for Improvements and Nerfs?

Shields are now more effective compared to previous iterations, which is a blessing for shield users. The most useful Ash of War, Hoarfrost Stomp’s damage just got nerfed and even has its cast time increased. Lastly, the Mimic Tear Ash got its damage nerfed with its spirit’s behavior pattern changed.

The version number of this update shown at the lower right corner of the Title Screen will be as follows:

Online play requires the player to apply this update.

Which Platforms got the Update?

The new update affects all platforms, which are PS4, PS5, Xbox One, Xbox Series X/S, and PC via Steam so before you can play, download and install the update.