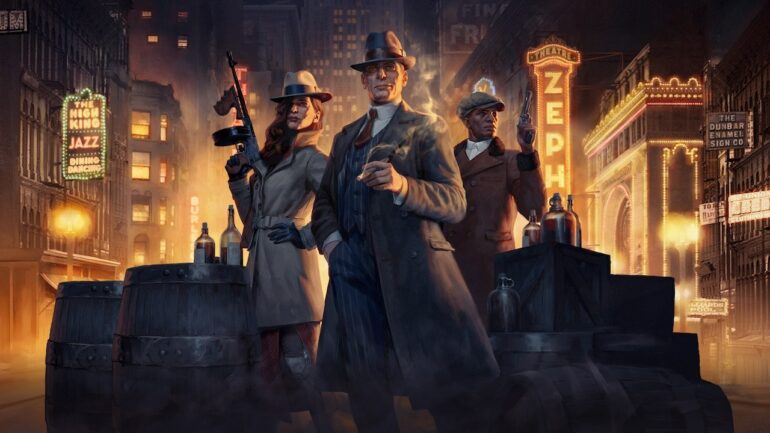 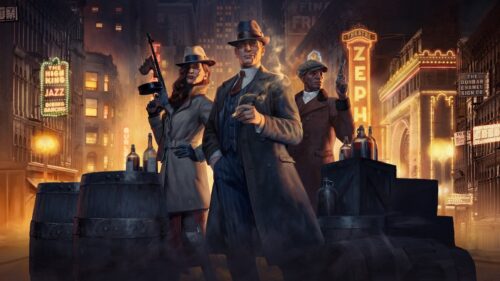 When the government brands something as ‘illegal’, citizens are expected to stay as far away as possible from it. But, more often than not, that results in the opposite. In the era of Prohibition, that’s exactly what happened. Booze of all kinds was forbidden for the masses to enjoy. But try as they might, the government cannot possibly separate the people from their alcohol. And the demand for liquid gold would skyrocket during the era.

It would take a ruthless group of lawbreakers to provide that which cannot be bought in the open… and get extremely rich off of it. Sadly, mutual growth is not in the cards. Everyone wants what the next person has. And they’ll do everything in their power to screw them over.

Empire of Sin is a tactical squad-based shooter and empire-building game set in the roaring ’20s. Players take control of an up and coming crime boss as they scratch and claw their way to the top of the crime world. Players have a choice between an avatar from a rogues gallery of well-known gangsters. Each character has traits and skills that keep gameplay fresh for new runs. As well as their own unique questline to follow, on top of the empire-building.

There are 2 ways to control your gangster is either by direct control or pulling the cursor out and telling them where to go. The city of Chicago itself has split into a dozen or so neighborhoods that need to be conquered in order to own the city. Randomly generated crews will pop up all throughout your playthrough, and they will get in your way. That’s why you need to recruit some muscles and some brains to your crew.

The boss can choose to run with a crew to potentially increase their effectiveness. To do this, they need to acquire notoriety and through sheer name recognition, the can player can recruit talent into the Organization. Be careful though, as notorious as you think you are, you need a lot of money to keep your soldiers in line.

Building a criminal empire requires money. The most reliable source of money comes from the production and distribution of booze. The main backbone of the Organization, being able to produce booze is like having a license to print money. Although the game does its part in breaking down how to build up a criminal empire, there are so many hidden details that it doesn’t bother to point. But, here’s quick notes version of it anyway.

The first step requires taking over properties and converting them into breweries. The next is opening up speakeasies and brothels, you know the places where people consume booze. Knowing what type of establishment to favor is completely dependent on the passive skills of your chosen character. But regardless, booze is the way to go.

The next step involves upgrading your establishments to further increase their capabilities. In the case of speakeasies, it’s all about improving the service and increasing its income potential. The same goes for brothels. Breweries, on the other hand, benefit from increased production and storage. This all seems quite doable, but players will quickly find out that generating money through partnerships and business savvy is very inefficient.

Taking it slow is something that this game doesn’t allow the player to do. There are so many pressures within and without that forces the player to constantly spend their money. In the absence of a dedicated doctor, a good chunk of money will go towards healing items. Unique armor items also fetch a considerable price. Thankfully, weapons are abundant and seldom an issue after raiding a hand full of derelict buildings and parting the local thugs of their firearms. The real problem is having to adhere to the outrageous demands of some of these talented gangsters. Recruiting and arming your crew will cost in the 10’s of thousands. And in the early game, you’d be lucky to be generating 1 thousand a week.

The last step on the way to building up your income is deciding on how best to deal with rival gangs. Most gangs aren’t hostile at first. Stumble into the wrong part of town, and you may want to introduce yourself to your potential rival. These sit-downs are some of the best parts in the game. The line delivery often hits the right spots, and the over-exaggerated voice acting sells the bit from start to finish. Choosing who to side with, and who to go to war against is probably what you expect to be constantly dealing with. Eh, not really. And it’s for the stupidest of reasons. Which I’ll get back to after describing the combat system.

The tile-based combat is pretty standard as the genre goes. If you’ve ever played games like X-Com, you know where this is going. Shooting, positioning, Overwatch, and abilities. The whole thing’s in there. Most of the abilities are versions of the ones you’ve seen in X-Com games too. I do, however, like the meat hook ability. Essentially, it allows the user to reel an enemy, scorpion style, to a tile adjacent to them. If you have the action points, you can proceed to shoot them point-blank in the face with a shotgun. It’s a minor bright spot in an otherwise bland combat system.

Off the top of my head, the biggest issue I have about this game is that it is filled to the brim with bugs and glitches. The faulty A.I. takes a while to think of its next move. And when it does, it goes about it in a silly manner. Random sound effects like breaking boxes and shattering glass play at random intervals. Character animations freeze and lock up for long stretches and remain that way even when loading save files. And we’re only scratching the surface of the minor stuff.

For something more costly to the game involves the way the game handles events. The sequence of events does not appear to follow any order. Messages can pop up at any moment, telling you of something that’s happening around the city, but you’ll miss it because you’re trying to enter a building. In my couple of playthroughs of the game, there have been instances where quests fail to load in entirely. Thankfully these are just character moments and have nothing to do with the overall gameplay. But if something like this happens to a critical event, then that save file is as good as dead.

For all the stuff I’ve said about the bugs and other issues, I can forgive that. That stuff can eventually be patched out. But there is a serious balancing issue that I cannot wrap my head around. The faction system is one of the busiest and complex looking things I’ve seen in a long while. As much as I love seeing it manage so many moving parts, I am greatly disappointed in the methods in which to overcome it. Usually, mobs have to wage war and take over territory in order to progress. I learned eventually how utterly boring and pointless the defense missions are, with having the same objective and maps repeating endlessly. The only effective solution is to use the money to upgrade security and remaining hidden. And that also was annoying to do, especially with how slow money accumulates over time.

No. The best way it seems to deal with rival gangs is simply to declare war on the faction and go knocking on the door of the enemy’s safe house. I know I hated Mafia III’s handling of progression. But this goes so completely in the opposite direction. By having an express lane towards the boss, I can essentially wipe out everyone on the board and just do the clean up afterward. It doesn’t help that a good crew is enough to take down elite guards on their own. There isn’t much in terms of enemy variety. Just the same guys with different guns. With the boss out of the way, you get money and some territory. The police will begin to notice your actions more… and guess what their reaction is? Nothing. They’ll hand out vague threats. Asking for money, but at the end of the day, they’ll just sit twiddling their thumbs expecting us to give them a slice of the action. Facepalms all around.

I can confidently rank Empire of Sin as one of my biggest disappointments of the year. The visuals and music are great, and the 1920’s setting is tastefully recreated here. But that doesn’t excuse the fact that the game simply is full of bugs and other issues. Not even the seemingly Shadow of Mordor-esque recruiting system is spared from this. There is potential for in-game stories is great, but it’s constantly being sabotaged by its own mechanics. I can accuse someone of being a traitor, quit the team, and possibly hate my guts. But that’s not the case. Their names will appear in the black book again, and I can recruit them once. Minus a small bit of loyalty… and that’s it.

I can’t for the life of me recommend Empire of Sin without giving it more time to iron out its issues. Gameplay-wise, it is quite enjoyable, but that enjoyable aspect gets drowned out in all the issues it has. Wait for them to fix the game until you decide to get it, and possibly a free story expansion with more icons to play with. 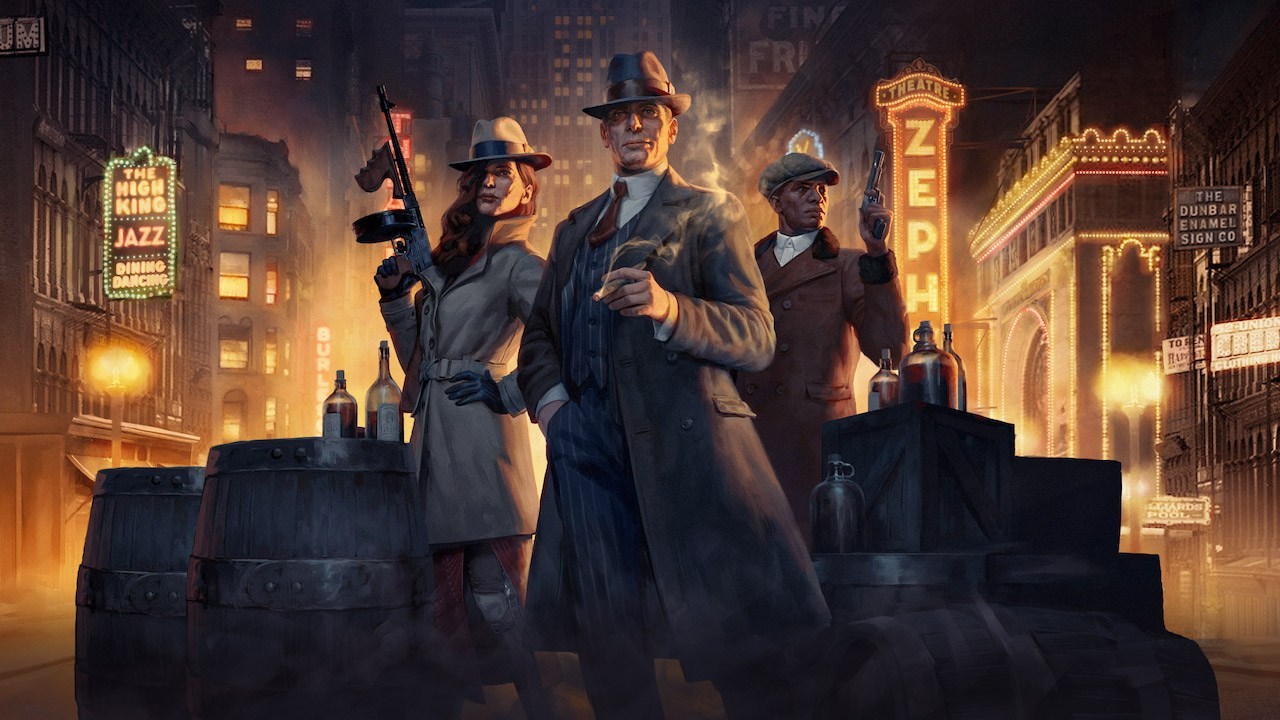 Empire of Sin – Review
Score Definition
We want to emphasize that 5 will always be the “average” number, not 7. So by far, it’s 50% great and it’s also 50% bad.
Pros
Has the potential to be a good game
The empire management aspect has an interesting approach
Kinda fulfills the mob boss fantasy
The boss crew steam rolls over any opponent
Leans heavily on its 1920's setting
Cons
Full of bugs and glitches
Repetitive and aimless at times
Money generates far too slowly
Chain of events constantly break
Too many random events to deal with
5
Average