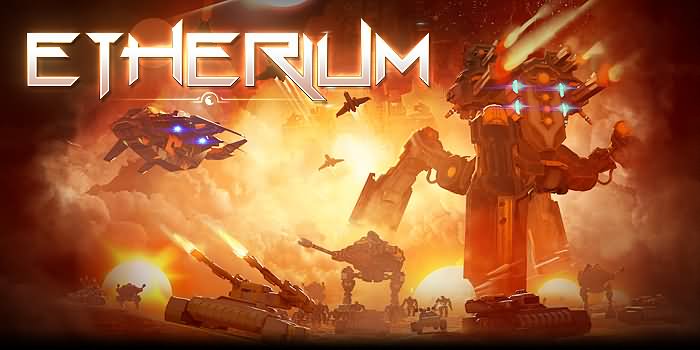 Recently, a new Sci-fi Real Time Strategy game was just released for the PC by Tindalos Interactive. Etherium is a game where three empires wage war over each other for the titular resource for their own various needs. Sounds a bit like Tiberium Wars with a little dash of Starcraft doesn’t it? Does the game have what it takes to stand out on it’s own? Read on and find out.

At first glance, the Etherium looks like your standard sci fi RTS game. You have your three factions that each carry a certain Sci-fi stereotype. First off you have the Consortium, the game’s equivalent of the Terran race. They share the same “heavy machinery” feel with the blocky and industrialized mechs and rugged looking vehicles. Next we have the Awakened of the Intari. They’re basically the protoss analogues and fill in the stereotype “hyper advanced, mystical space wizards” race. White, blue, and a lot of glowy bits are a signature in the Intari’s futuristic aesthetics. Lastly, to round up the roster is the Vectide empire. The Vectides actually resemble the Scrin of Tiberium Wars fame more with their heavy mechanical alien appearances and heavy ties to the game’s titular resource.

Each of the game’s factions also play differently based on how they interact with Etherium. Each faction has a set of commander skills that they can activate to affect the battlefield. The Consortium use it as their primary source of income which they channel into rapid industrialization. This translates in game into their skills which maximize resource gain and speed up building so they can rush base expansion faster. The Intari use Etherium in their attempts to predict the future. This translates in game as their ability to predict when the next weather event is happening, which will be expounded on later in this review. Lastly, the Vectides have a symbiotic relationship with Etherium, and this manifests in game as commander abilities such as a protective shroud and EMPs that disable enemy units.

Besides these differences though, all three factions have units that perform functionally identical to each other. There’s the plethora of infantry units that each have their own specializations, assault vehicles, aircraft, and two types of giant robots. One suited for all around warfare and the other suited for siege against buildings. The overall effect of this is that each faction is played differently because of their specialties but at the same time, there isn’t much variety in army build since each faction’s units are functionally similar.

As mentioned before, the game features a dynamic weather system. What this means are that at certain points in the game, the planet’s local weather phenomenon wreaks havoc on the battlefield. Different planets have different events, such as a snowy planet having a blizzard that both reduces visibility and freezes bodies of water to provide an alternate path to the enemy’s base, and a desert jungle planet having hurricanes that completely thrash airborne vehicles that it happens to pass through. These events can both ruin an unprepared player, or change the game for those who anticipate them and use them to their advantage. The Intari make full use of them by not only predicting when they occur, but can also directly force them to happen at the cost of command points. This mechanic helps add some environmental interaction within the game which helps put some strategic depth into the game.

Besides environmental events, the other outside force that players get to interact with are secondary factions. Secondary factions come in multiple flavors and often act as neutral entities that players can attempt to recruit by modifying their buildings. It’s a nice touch but in the end all it really does is give free units, nothing too spectacular.

Etherium‘s core gameplay handles like any ordinary RTS in that you build a base, gather resources, make units, and blow stuff up. The biggest difference in the game though is how heavily rooted it is in expanding territory. In Etherium, players can only build outposts on predetermined nodes. Each node has to be adjacent to another node or else they get de-powered and become nonfunctional. Everything from the number of total units on the field, to where you can deploy new units, to research labs to increase tech level are all built as expansions to outposts. Thus it is important to expand as much as possible to get the upper hand. It is with this respect that the game suddenly feels similar to old school RPGs like Risk.

The strategy doesn’t just stop at ground level for Etherium. In lieu of a standard single player story campaign, the game has what it calls Conquest mode. In Conquest mode, the battle extends all the way to a galactic scale where players take turns conquering planets. Each player has a list of goals they need to accomplish in order to win, and the players can also opt to spy on the enemy once per turn to find out their victory conditions if ever they want to halt their enemy’s progress. Players take turns allocating action points into what actions they want to take for that turn. Actions range from assaulting an enemy ship before they have the chance to deploy, moving to another planet for conquest, researching tech, and many more. When contesting for a planet with another fleet, the game then shifts to it’s regular RTS gameplay. The inclusion of Conquest mode adds an even deeper level of strategic combat present in the game.

Etherium is a fun yet deep game. The game’s pace is fast enough to make every match exciting yet complex enough to leave seasoned RTS veterans wanting more. The inclusion of Conquest mode helps ramp up the number of hours you’ll be spending into the game.

To sum it up, Etherium is a fun yet deep game. The game’s pace is fast enough to make every match exciting yet complex enough to leave seasoned RTS veterans wanting more. The inclusion of Conquest mode helps ramp up the number of hours you’ll be spending into the game. Though some work could have been put in making each of the faction’s units a bit more culturally diverse, the game handles it’s three faction dynamic alright without looking too much like a StarCraft clone. If you’re looking for a quick strategic fix, then Etherium‘s the game for you. Get it now on steam.