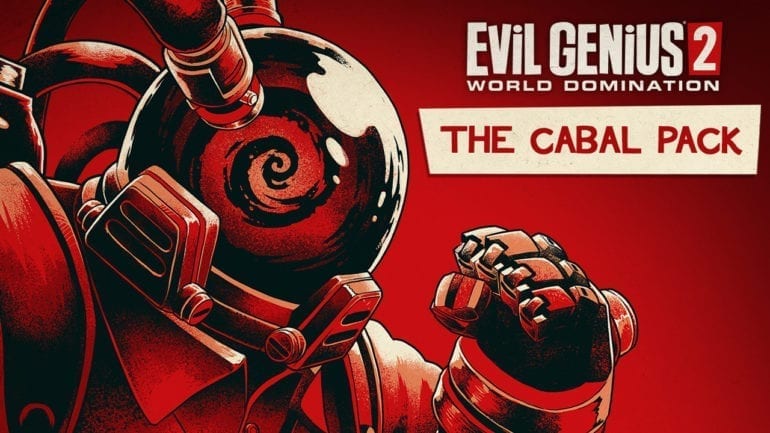 The newest DLC is called The Cabal Pack and it introduces a new wannabe Super Agent called Espectro.

Behind the red mist of his headgear lies a twisted mind fixed on power, all with the singular aim of your annihilation. Not only can he charge up devastating attacks, Espectro can also use forbidden technology to create clones of himself. He must be stopped, but more than that, his incredible abilities must be harnessed for your own…

SEEING RED
Out today, The Cabal Pack introduces Espectro as a brand new acquirable henchman, along with accompanying Side Story objectives and plenty more: In full, the pack includes:
• New Henchman – Espectro
• New Lair Equipment – the Cabal Indoctrination Chamber. Change the appearances of four other henchmen by giving them the Cabal makeover.
• New Lair Equipment – the R.A.Y.G.U.N. Interrogation Device
• Accompanying Side Story objectives

All of the Cabal Pack content will be available in new campaigns.

The Cabal Pack is available as additional content for Evil Genius 2 as part of the Evil Genius 2: Season Pass. It’s also available to buy separately, priced $4.99 on Steam.

T’IS THE SEASON TO BE EVIL
The Cabal Pack is the first drop from the Evil Genius 2: Season Pass, with plenty more lair-building content on the way to satisfy supervillains everywhere.
As detailed today in the Season Pass roadmap, The Cabal Pack will be followed by:
• A lair items pack
• Another henchman pack
• Two minion packs
• A campaign pack

PATCH V1.3.0 INTRODUCED
Patch V.1.3.0 has also been made available for Evil Genius 2 this week. It addresses core areas of feedback from the Evil Genius 2 community, ranging from progression issues to game pace, and as a result the length of the campaign can be significantly shorter for those geniuses who want to play more aggressively.

The update covers a wide range of balancing adjustments and features bug fixes too.

Evil Genius 2: World Domination is now available on PC via Steam. Check out our review here.