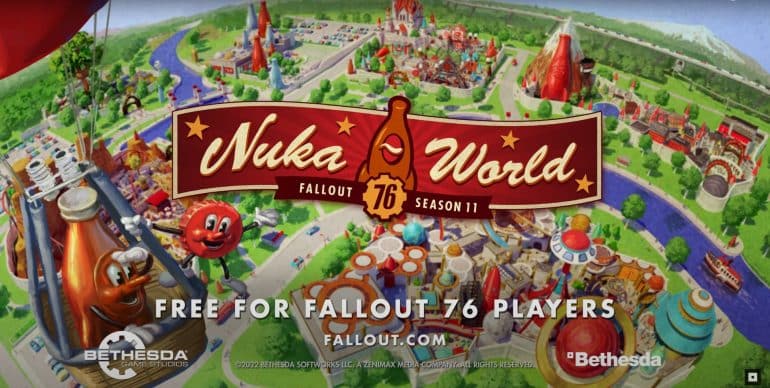 It has been revealed that the next season of Fallout 76 will be focusing on the wonderful Nuka World. According to the official website, Nuka World is a traveling roadshow and will be making a stop at Appalachia soon. The new season will be introduced as a free update for the game this coming December 6, 2022. It will introduce carnival games, public events, and a new Region Boss.

In the new Season 11, players will be able to explore a brand-new game board inspired by Nuka-World. This was first introduced in Fallout 4 DLC of the same name. Players will be celebrating Pre-War America’s number one carbonated beverage, Nuka-Cola.

Players can unlock Nuka-Cola and Nuka-World-themed souvenirs that include cosmetics, C.A.M.P. items, Atoms, Caps, and a lot more. They only need to gain a lot of S.C.O.R.E. from playing the game to earn rewards as they rank up.

Fallout 1st members will be able to unlock exclusive rewards and special S.C.O.R.E. boosts throughout the season. The update will grant all-new feature for the members for free, which is the Ammo Box. Keep unlimited numbers of bullets, shells, and others in safekeeping. Note that this is only for stackable ammo types only and will not store Fusion Cores or Plasma Cores.