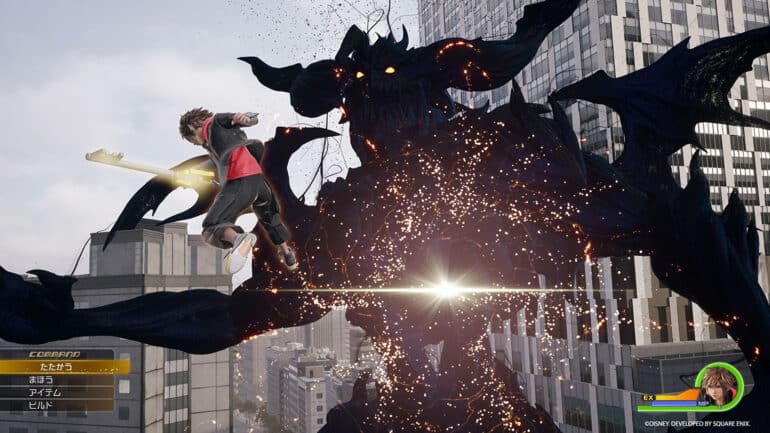 So, Kingdom Hearts 4 was announced this weekend. The 4th mainline and the 16th entry in the entire series, which includes more than a hand full of lore-centric mobiles games. For the most part, the trailer was received rather positively by fans and the Kingdom Hearts Faithful. While there is a conversation going on about aspects of the art direction and where the Square is taking it, there is no denying that many are looking forward to Sora and his friends’ next outing.

Mere hours after the trailers and the Kingdom Hearts Tweeter is already full of fan support. Apart from the outpouring of joy and support, many fans took up pen and pencil to create some pretty neat images of Sora and Strelitzia. Again, you can find many examples of this on the tweet thread.

And then there are the others who posted more comedic takes on the announcement.

Like Twitter user mio here who likened Sora to what appears to be a fast-food worker running late on their first day at work. Imagine being Sora running through Shibuya Crossroads in the wee hours of the morning. Hmmmm… if we ever get to the point where Sora loses his memories again, it might just turn out like this.

And then there’s this tweet about how Sora’s going to have to work at a Starbucks to pay off his new Quadratum living expenses and taxes. Look, to afford an apartment like that, he’s going to have to come by some serious cash, and fast! I wonder what’s the tip rate for your typical “problem solver” these days?

Other fans like Decimo here point out how Sora traded in his signature oversized boots for normal-sized Vans. Other variations of this include the “RIP Sora’s Shoes 2002-2022”.

For many years, we’ve grown to love and cherish Sora’s cartoonish look. To see it go like this is something like a shocker. Don’t get me wrong, Sora looks good in his photorealistic art style. But let’s not forget that there are many who are quite attached to the art style that they’ve known for 20 years now. And they feel like they’ve lost some of that Kingdom Hearts magic.

Hopefully, we get to see that iconic look again should the series revisit some of the older worlds. Otherwise, it is what it is.

And finally, we have the fans who like to speculate what Donald and Goofy would look like in a photorealistic setting. This begs the question though, “have we gone too far in pushing the bounds of realistic graphics? Or have we not gone far enough?” I suppose we’ll have a firm grasp of the basics when we get the next update on the game… in maybe two years from now.

Joking aside, I know we are hyped about this game’s announcement, especially when it was announced three years after Kingdom Hearts 3 was released. But we gotta face facts, Kingdom Hearts 4 might not have anything ready for the next 3-4 years. That’s just how development goes with this game. Heck, Kingdom Hearts 3 took 6 years to develop, and even then, it had to cut content in the 11th hour. You never really know with these games until you actually play them.

But I do know that no matter how long people are going to wait, they’re going to patiently wait for the game to come out. And besides, people can still play the other 15 games and maybe, just maybe the story might be less convoluted.