Hope County stands on a knife’s edge. The doom’s day cult, Eden’s Gate have run rampant across the county. Forcing families out of their homes. Killing anyone that gets in their way. The strong are being selected to carry on once the end has come. The weak shares the same fate as those who resist them. Something is coming. The hour of reckoning draws near.

Far Cry 5 is the latest game in the Far Cry series. You play as a deputy of Hope County, Montana. While on a mission to arrest the religious leader, Joseph Seed, you and your team are overwhelmed and separated. 3 of your team are captured and given to a member of the Seed family in preparation for their integration to the cult. It is your job to build a resistance to save your team and at the same time take back Hope County from the grasp of Eden’s Gate. 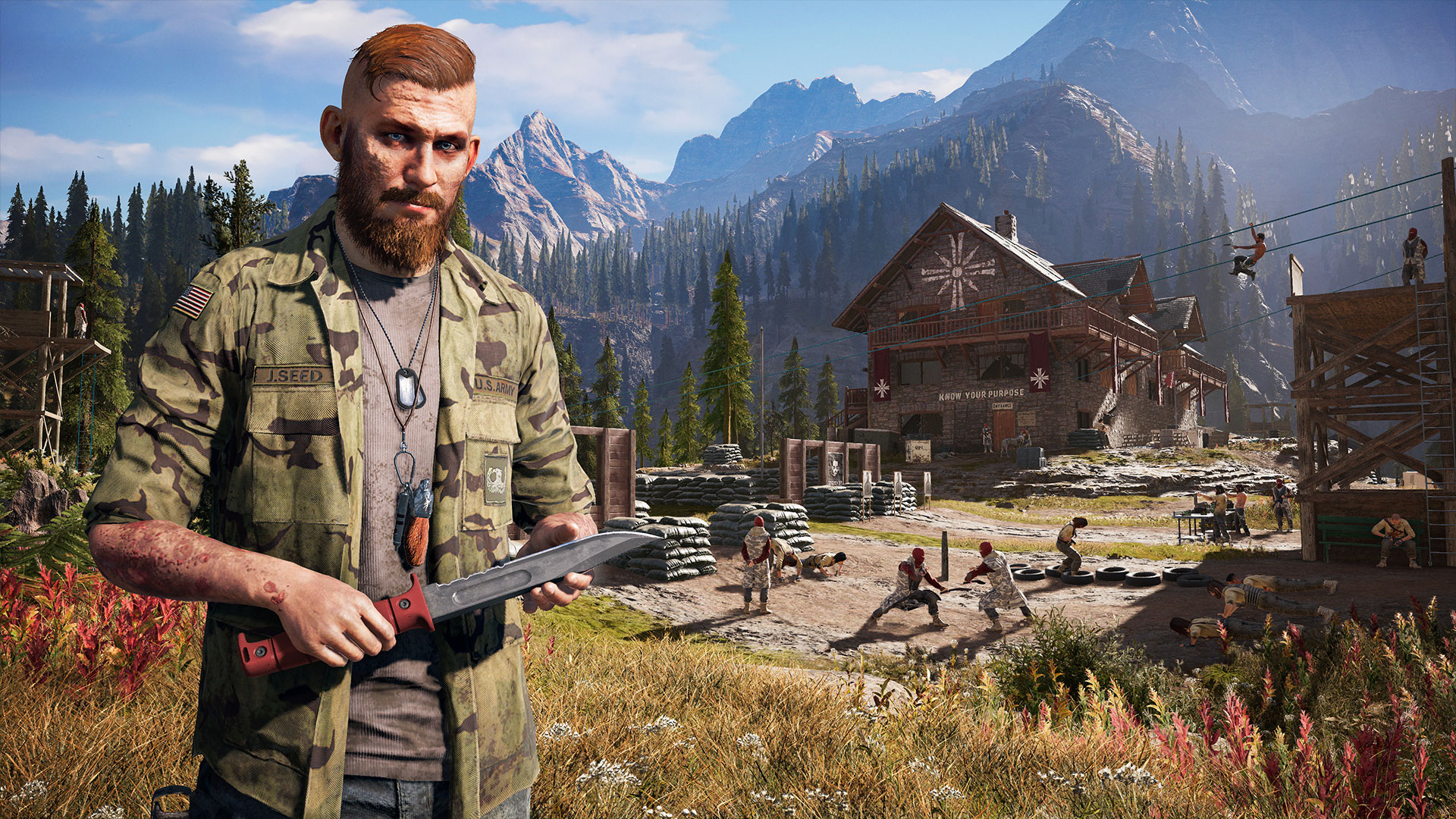 More powerful gear is unlocked by reaching a certain resistance level overall. You can tackle all the regions at once if you so choose. Or liberate each region one at a time, it’s all up to you. Points for perks can be acquired by solving prepper stash puzzles and completing challenges. The prepper stashes are really creative side missions in which most involve some kind of crazy platforming. They rarely feel like a chore especially when the loot involves money and points.

The rest of the side missions are standard fare in any open world game, with the same light-hearted quirkiness the series is known for. You have Far Cry’s signature strongholds to take back, various fetch quests, and the ever-popular kill/destroy missions. But the presentation is what keeps the experience from growing stale. It distracts you from the fact that you are doing the same kind of mission multiple times. It’s also worth noting that you can choose your method of approach in most missions. You can be stealthy or go in guns blazing.

There are also non-cult related activities you can do in the game. The driving minigames in the form of Clutch Nixon challenges are one you can find early in the game. There are also fishing challenges and base jump distance challenges that are found later in the game. At the top of all this is the Arcade. It’s a place where users create custom game modes. There, user-generated events also count towards your challenge points, encouraging more varied gameplay.

Very early on in the game, you encounter certain individuals that can help you with the cult. These specialists have unique perks that essentially mean they help you clear areas faster. With enough points, you can have 2 of them by your side, and it’s really fun watching them interact with each other. They aren’t really needed to complete anything in the game. But who’s going to argue when you’ve got a bear fighting by your side? 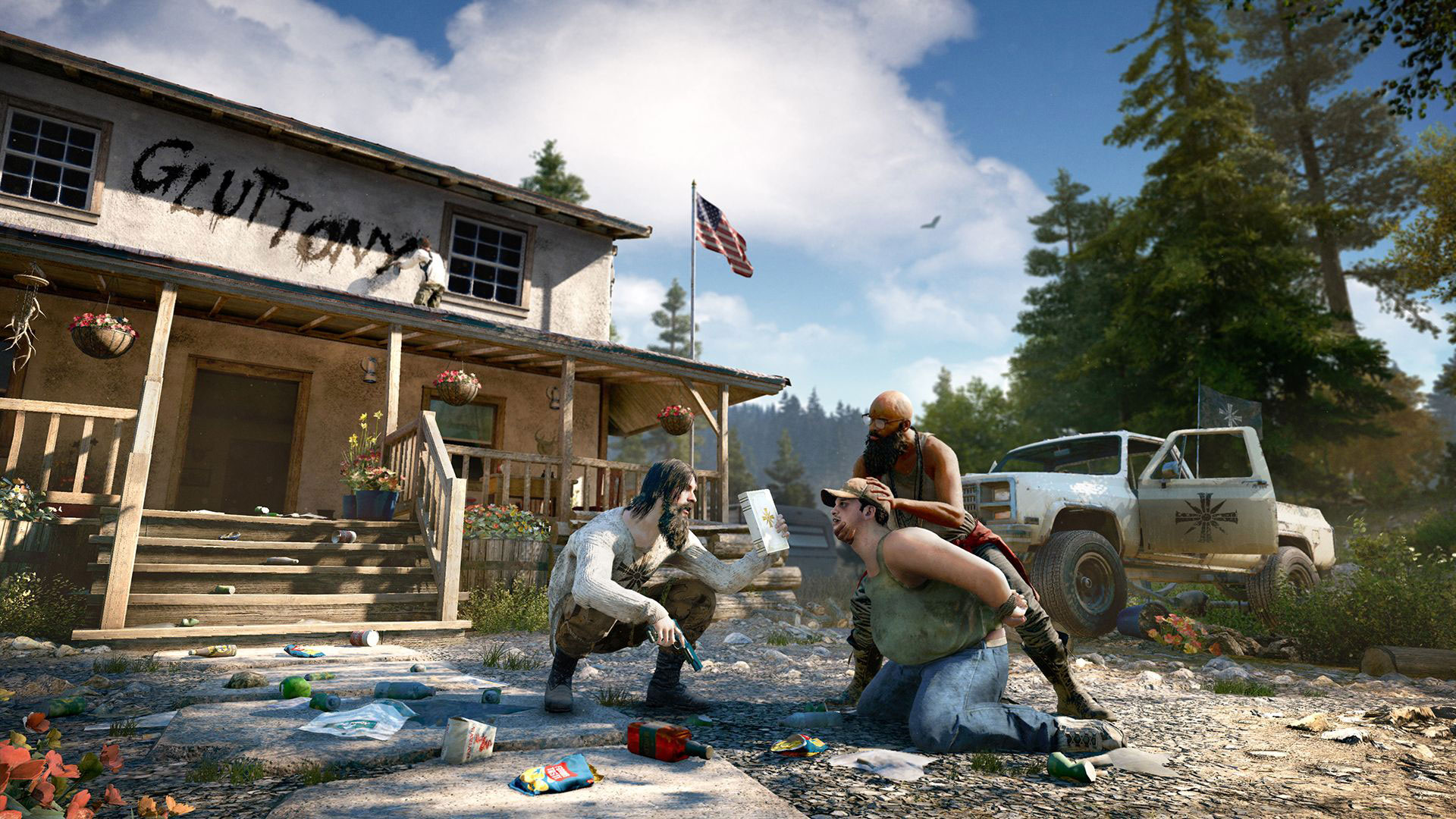 The game doesn’t break the mold, but it’s taking steps in the right direction. The removal of towers that were once staples of the game is a welcome change. You have to explore the map to reveal more parts of it. The UI has been stripped down to the bare minimum, so the world itself is at the forefront of the experience. The new perk system streamlines character progression and provides upgrades once you have collected enough points.

If you’ve ever played a Far Cry game, then you know that a charismatic antagonist is key to the Far Cry experience. And Joseph Seed stands tall among the great psychopaths of the past. There is something unsettling about his calm demeanor. It’s like being in the same room as Hannibal Lecter. The rest of the Seed family are equally memorable. John Seed uses submission to justify his baptisms. Jacob Seed uses survival of the fittest to weed out the weak and use the survivors for his army. And Faith Seed who uses Bliss to make people susceptible to her commands. The rest of the cast does not have the same impact as the Seed family. For the most part, they are there to give you missions. You can be off on your merry way and not give a second thought to them until the story forces you to.

Microtransactions are unfortunately part of the game as well. The best gear and cosmetics can be bought with real-world currency in the form of silver bars. There is a way to acquire silver in-game but the amounts provided barely cover the cost of anything significant. On the bright side, all items so far can be bought with in-game currency. Though it’s quite disheartening to play multiplayer with people who have fewer hours than you do sporting all the fun weapons the game has to offer.

The AI can be questionable at times. There are instances where the enemy just takes its time trying to figure out how to confront you. It was annoying at the start, but as time goes by, it just becomes normal. As always, the wildlife interacts with the NPCs in the game. This often results in random instances that give this game even more charm.

The experience as a whole is very satisfying. All the elements that make up the Far Cry experience are present. From the vehicle physics to the audio design, everything is up to standard. The setting and story are the real stars here, and it shows. The AI is unpredictable at times, maybe even a little derpy. That’s to be expected from any open world game.

Far Cry 5 is one of the best works of Ubisoft to date. The developers really kept an ear close to the ground and made changes to the Open World formula where they are needed. I guess they don’t need to be told the definition of insanity. The game appeals to people who are interested in open world games and veterans of the older games in the series.

And so, I give this game a score of… 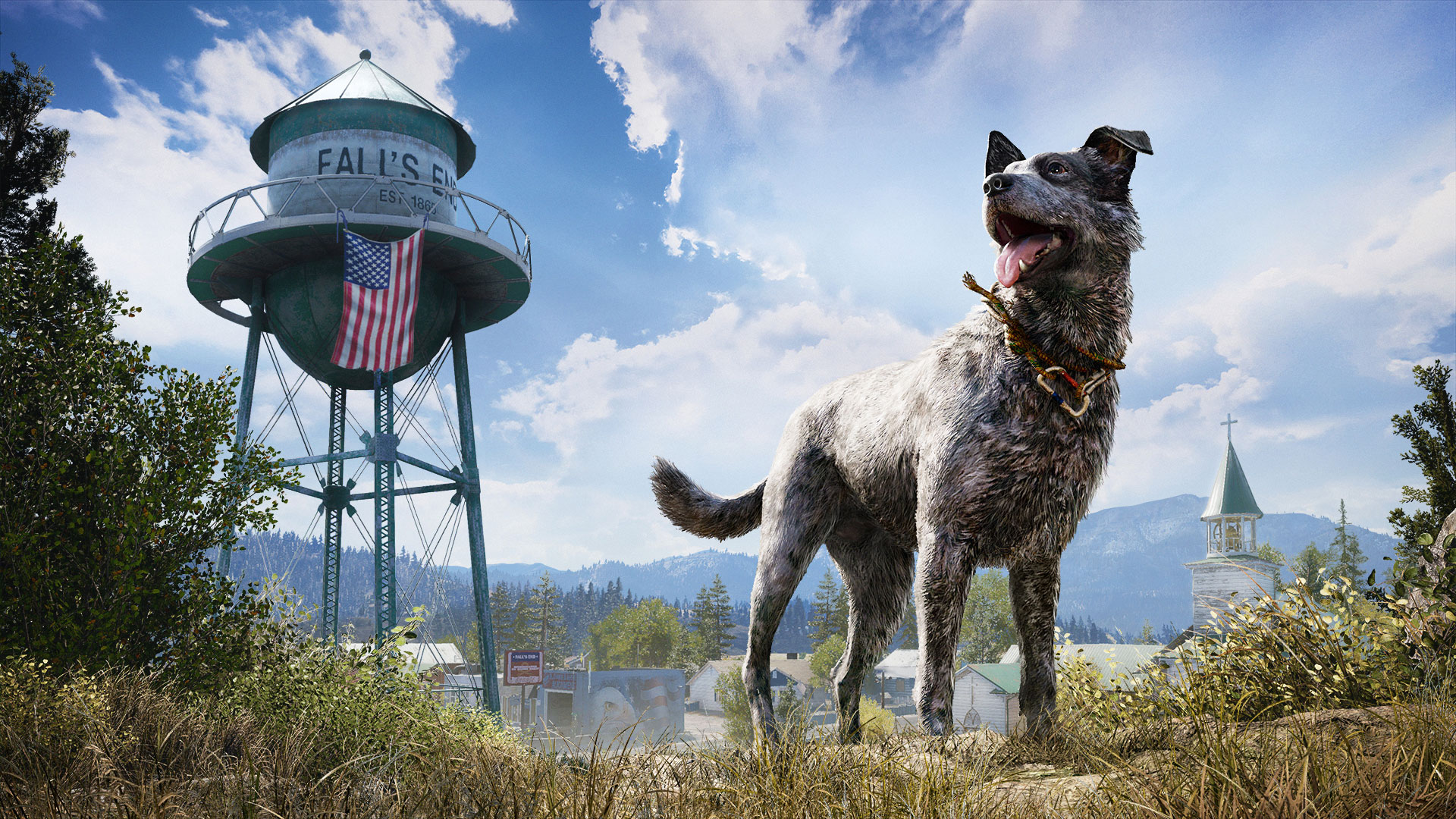 Far Cry 5 - Review
Score Definition
When the issues of a game are rolled and stomped by its greatness, then it’s something to invest on if you have some spare.
Pros
The non-linear progress is a welcome addition
Changes to the Ubisoft Open World Formula
The setting and story is very compelling
The signature open world fun Far Cry is known for
A visually beautiful game
Cons
The AI can be annoying at times
Few instances of sequence breaking
Bugs that one can expect from open world interactions
Microtransactions that do affect gameplay, not just cosmetics
8.6
Great