Here's how you can start the treasure hunt and where to find this powerful gear. 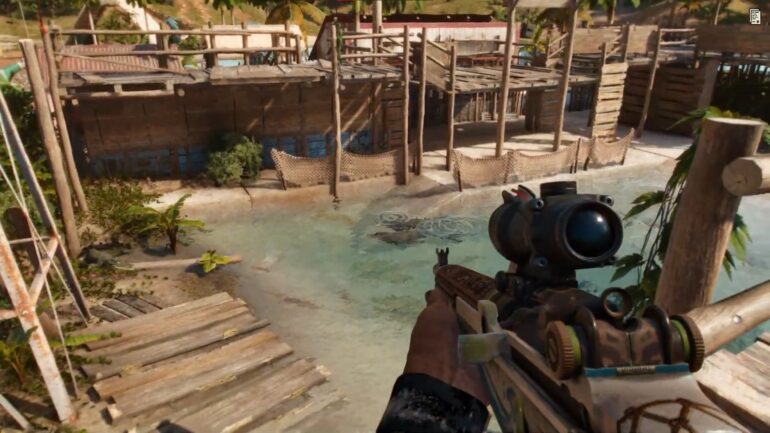 Game company Ubisoft has recently released the latest entry to the Far Cry series, Far Cry 6 and everyone is already enjoying its interesting story and awesome gameplay. There are tons to do in this game and one of them is to hunt for treasure that will reward you with lots of goodies. In this guide, you will learn how to complete the Far Cry 6 Crocodile Tears Treasure Hunt and where to find Luis’ Stash.

In this treasure hunt, Dani Rojas hears about the location of some powerful gear that a certain person has left behind. Luis was a lover of crocodiles, but unfortunately, he became a victim to one of these cold-blooded reptilians. According to sources, his best gear is now somewhere on his farm and anyone can grab it for keeps. You can get it, but you will have to go through some meticulous planning first, or else you will follow into Luis’ demise.

The Crocodile Tears Treasure Hunt is located in Aguas Lindas in the region of Madrugada. You will need to locate the Treasure Hunt starting point in the open world in order to start this.

When you show up at the location, you will see a shack with a happy crocodile statue beside it. You can find a note inside and all you have to do is read it to finally begin this treasure hunt.

The note talks about Luis fearing for his life with the soldiers threatening to feed him to his favorite crocodile, Beatriz. He reveals that he has kept his gear inside his home and the only key is kept around his wrist. It seems we know now where the key is, a little bit of a surprise though as to where we will find it.

As soon as you finish reading the note, you will be lead to the location of the treasure hunt. When you arrive at the farm, there will be some guards, but it will be easy for you to dispatch them quickly. After killing all of them, you will now find a small body of water, which is where you will be looking for the key. This is filled with crocodiles and you will have to kill every single one of them before the main event.

After killing everyone, you will see the dead corpse of Luis, mutilated and bitten at many places. And he is also missing an arm. This might have already clicked for some, but for the others, you should know that the arm that is missing is also where the key was tied on. Now to find the one who has it, which should be the missing crocodile from the enclosure.

You should be able to find a small hut inside the enclosure and when you enter, you will be greeted by the one and only big croc Beatriz. And who has Luis’ missing arm with the key? It is this big reptile and she is much stronger than the others. Prepare to combat this large, scaly beauty to the death and pray you do not get killed.

After killing Beatriz, search its corpse and find the key that can open the stash that is somewhere within the farm. Use your grappling hook on the metal windmill and swing over to the other side where you find a house. Inside it is a chest that is locked. Open it with the key and you will be rewarded with the Surf & Turf rifle.

Congratulations, you have finished a treasure hunt and got rewarded with a powerful rifle! It has decent damage and is a bit low on accuracy, but its velocity stat is at max. It also has a rate of fire of 133 RPM and a magazine with 20 bullets. Have fun!

Speaking of fun, our resident reviewer also thought that Far Cry 6 is a fun game to play, but not that revolutionary. It does bring back the charm of the previous Far Cry games in this though.