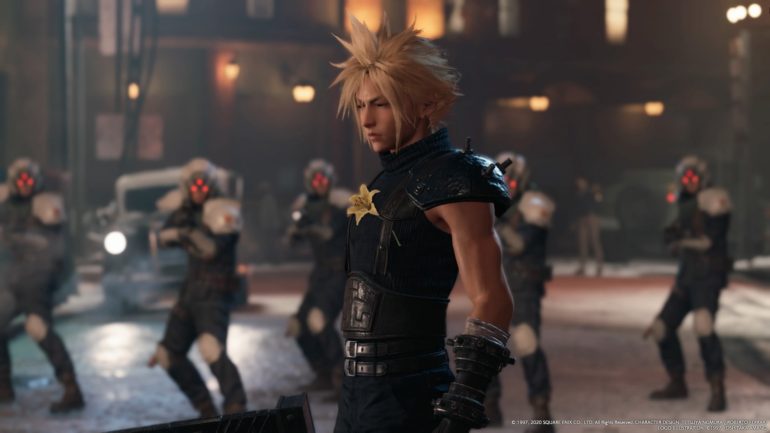 Final Fantasy VII Remake is nearly upon us – roughly a month from now, to be exactly. The much anticipated game has been delayed to the point that many feared that it may remain in development hell. Fortunately for us, that was not the case. To further cement that fact, Square Enix finally nailed down the release date. Much to the great relief of gamers world wide.

What we didn’t expect, however, was this demo that almost feels like an apology for missing out on yet another potential release date.

To be clear on some things, I was one of the people planning on waiting for reviews to come out before making a final decision on the remake. I am going to get this game, for sure. But I wasn’t sure if it was a day one purchase for me OR to wait for more episodes to come out first.

The download page for the demo was very specific that this content covered the opening reactor segment of the game. There’s nothing particularly new to see, especially to those who have already seen this demo at trade shows and what-not. Having seen bits and pieces wasn’t’ going to dampen my enthusiasm in the slightest.

From my hour or so of playing the demo… All I could say is that gameplay trailers do not do justice… at all.

Nothing prepared me for the feeling of actually booting up the game and playing as Cloud and Barret. I didn’t even bother skipping the opening cinematic. “I might as well enjoy as much of the ride as possible.”, I said to myself.

(Do note that I was playing the R3 version of the demo, and couldn’t read any of the on-screen stuff. The dialogue was in English, anyways. So, it’s all good.)

Controlling Cloud is a piece of cake. The ‘Ex-SOLDIER’ is capable of wielding the Buster Blade with great efficiency. It’s nearly weightless in his hands. Never mind the fact that, to a normal man, swinging a weapon of that size is a work out in of itself. Then again, Sephiroth is also part of this world… (Let’s not dwell on it too much.)

After mopping the floor with a handful of Shinra guards, the mission starts in earnest.

One of my most favorite parts of the demo is enjoying the banter between Cloud and the Avalanche crew. You could tell right away from the moment they disembarked from the train, that their individual quirks are on full display. A real far cry from the generic piles of polygons they once were in the original game.

The ones that stand out the most were Wedge and Jesse. (Sorry Biggs, you’ll get your time to shine eventually.) Wedge is always looking on the bright side. This is especially true when the entire crew discusses their uncertainty over their new merc and his intentions of biting the hand that feeds him.

Jesse’s bits are entertaining, to say the least. She can’t seem to get her eyes off of Cloud. And it really shows. Almost all of her lines involve Cloud is some flirtatious manner. Of course, our stone cold SOLDIER casually brushes it off. But those little exchanges make this already great demo a must play in preparation for the full game.

When both Barret and Cloud are playable, that’s when the real fun begins. Barret doesn’t nearly do as much burst damage as Cloud does but he is indispensable when range becomes an issue. At this point, it doesn’t matter which character you play. It’s still a cakewalk until the giant robots start appearing.

The first real test comes in the form of a guard bot that’s vulnerable to fire magic. But we don’t know that until Cloud points it out. (A real effective way of getting information across, btw.) The fight only took a long minute, but it was really fun. The bot didn’t take much damage until it over heat. Every time it took a knee, I would be smashing the ever living daylights out of it until there’s nothing left but burning scrap.

Listening to Barret’s rant about reactors near the boss fight was an unexpected bonus. To sum it up, Barret gives this entire impassioned speech about why the reactors need to stop and how the corporations were bleeding the planet dry. Cloud did not seem to care, in the slightest.

The entire segment involving laser fences is a clear sign to me that the full game is more than just hack-and-slash affair. Nope, there’s going to have some elements of puzzle solving and much more. It’s not too difficult. At least there’s Jesse, ready to point out how in the world how someone like Cloud got into SOLDIER after making too many mistakes.

The battle with the Scorpion Sentinel is all kinds of fun. One moment I’m playing as Cloud, slashing away like a mad man. The next, I can be playing as Barret, shooting it behind the back from a distance. Here, we have the duo revealing a critical piece of information – the bot is weak to lightning magic. Which Barret has a strong affiliation with.

The fight is a multi stage affair, involving the dodging of rocket attacks and precision lasers. At its most annoying, the darn thing brings up its anti-magic shield. The best thing to do then is to weather the storm until the shield go down.

This keeps going on until the Sentinel activates its devastating tail laser. At this point, environment elements get added to the mix as we see ourselves going behind debris to dodge its attack. In its final stage, the bot activates its auto-recovery feature on its legs. Taking those out leaves the door wide open for every kind of spam available on hand.

The fight will almost guarantee the use of more than a handful of potions. (And maybe a couple of MP potions as well for Barret’s lightning attacks.) At he end of it all, the bot going down activates the bomb, forcing the crew to make a hasty retreat to the exits.

The demo ends with a clip reel of things to look forward to.

It’s one hell of a ride. I already knew that I was going to enjoy the demo. But I had no idea how much more fun it was going to be. Actually controlling the characters is a much more satisfying experience compared to just watching let’s plays. It’s a completely different feeling.

Because of this , I am now absolutely certain that i’ll be picking this game up on day one. I may need to replay the entire base game again when the episodes start rolling out, but I have a feeling it’s just worth playing again and again. And who knows, maybe I’ll find something new in my subsequent play throughs.

If you are on the fence about making the purchase, let this demo sort everything out for you. At the very least, you’ll know that it’s not for you. For those of us who simply want more, the game’s merely a month away. And there’s no better time to get excited for it.