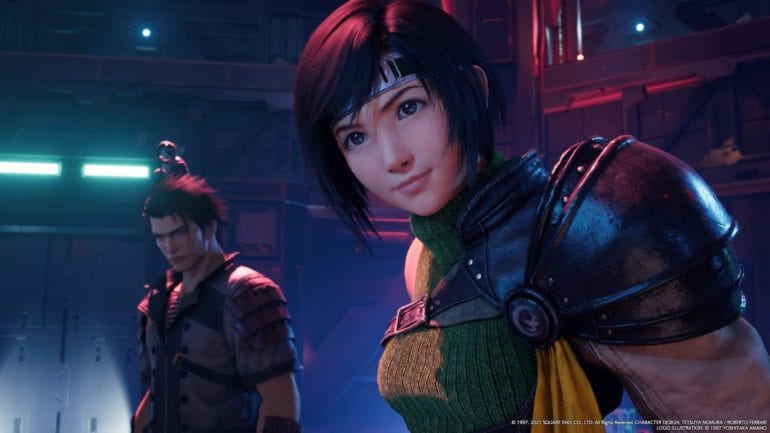 Final Fantasy VII Remake released last year and with it came a slew of old and new fans ready to join Cloud and company on a trek to stop Sephiroth from destroying the planet. The game was well received, but it was not without its critiques mostly pointing toward a lack of polished textures and some extra padding throughout the game. While I personally had no issue with the padding, the low resolution textures were disappointing, and it was more than just that door that needed help. Final Fantasy VII Remake Intergrade fixes and enhances textures, decreases load times, adds a graphics and performance mode, uses more dynamic lighting and fog effects, and introduces a photo mode on top of including a fantastic side story starring everyone’s favorite Wutai ninja, Yuffie. Even if you’ve already beaten the game, it’s worth revisiting Midgar and at the very least playing Yuffie’s side story.

I jumped around in Remake again, and the graphical upgrade is immediately evident. It’s still beautiful even if you choose to play on Performance mode for that silky smooth 60 FPS, though I found my preference to be Graphics mode. Midgar looks better than ever, and while many of the differences are subtle, there is more polish than there was before and loading times are very short and a welcome change from the longer ones before. Details on clothing are especially more crisp, and it’s evident when using photo mode. Photo mode is a lot of fun if you enjoy that sort of thing, but it comes with a few limitations. You’re able to control the camera, use filters, and remove your party from the landscape, but there is no way to pose characters or really alter them in any way. You’re also not able to get very close to them without the character model disappearing. Regardless, it’s not hard to still get some iconic shots in photo mode.

The main game doesn’t come with any new content until you’ve beaten the INTERgrade DLC, and then you’re treated to a brutal boss battle in the Shinra Combat Simulator in Chapter 17 on Hard difficulty. You will be using all you’ve learned to take down the additional boss, and it’s helpful to be good at dodging, blocking, and timing your attacks to a fault. It’s honestly worth replaying the game as a whole if you haven’t before doing this to max out materia and weapons. Final Fantasy VII Remake remains a benchmark for modern day JRPGs, and Intergrade gives it a glossy finish and makes it the definitive version of the game.

INTERmission’s biggest success is Yuffie with her feisty spitfire energy. She is incessantly mischievous and always ready with a comeback. There is so much charm in her clumsy yet sure demeanor. Voice actress Suzie Yeung does a great job at bringing her positivity and spunk to life, and I can’t wait to see what she continues to do with her. Throughout the two chapters, you get to see many facets of Yuffie. Chapter one is largely in the Sector 7 Slums and the chapter is a bit more light and fun while Chapter 2 follows Yuffie in the Shinra building trying to track down their greatest materia, and you get a few more serious, dramatic moments with her. Unfortunately besides Sonon, you don’t spend too much time with the new characters introduced in INTERmission. None of them stick out much after having played besides Weiss and Nero, who were previously in Dirge of Cerberus. That isn’t to say getting to know the brand new characters isn’t worthwhile, but I don’t think we’ve had enough time with them. Knowing that future games won’t go back to Midgar for a while, I’m not sure we will see them again soon.

Yuffie does run into a lot of familiar faces from Cloud’s adventure, and you even get to challenge several of them in the Fort Condor mini game during Chapter 1. Fort Condor was originally a location in the original Final Fantasy VII with a similar mini game, but it’s been transformed to a tabletop game here. You pit army against army with the goal of defeating as many of your opponent’s bases or just their main base within the time limit. You use forces based on Shinra enemies. It’s a little bit of a tower defense game with its own set of strategies and makes for an addicting set-up. You are able to rise through the ranks and challenge more people and eventually become the Grandmaster. Other than that, you’re able to fight Ramuh in Chadley’s VR Mission. Once you acquire Sonon, he isn’t too difficult to take down. Ramuh is a fun summon and a great addition to the battlefield.

In battle, Yuffie is a ball of fire, lightning, ice, and wind. With a limited party, Yuffie is able to imbue her weapon with any of elements using her Elemental Ninjutsu ability to exploit an enemy’s weakness, and her attacks are quick. She blitzes around the battlefield with more speed and agility than Tifa in Remake and all of her abilities feel snappy and responsive. You’re able to throw her giant ninja shuriken and attack from a distance, and then, with the click of a button, retrieve the weapon and continue attacking up close. Her Windstorm ability creates a gust of wind that damages and launches enemies toward you. If Yuffie’s weapon is thrown and is attacking the enemy it results in even more damage.

Early in the DLC Yuffie is joined by Sonon who allows you to use the “synergize” ability in battle. While you’re not able to control him, when synergized Sonon will follow Yuffie and target the same enemies. When synergized, Yuffie’s abilities become a team ability with Sonon joining in. These have different and more dynamic animations. You’re even able to use synergized limit breaks after a weapon upgrade from Sonon. I hope subsequent parts of Remake introduces dual attacks and abilities because it’s a great addition to an already dynamic and fun battle system.

Otherwise, much of the DLC is a bit familiar. When you aren’t in areas you’ve previously explored, you’re still in familiar looking territory. That isn’t to say it’s not gorgeous, but I wish there had been areas that didn’t feel like Yuffie and Sonon were just in the next room over from Cloud’s adventure due to lots of familiar textures and designs. Despite that, Yuffie’s adventure is still worthwhile, and once you beat it, there’s a great tease for the next installment, whenever that might be. Both Intergrade, with all it’s glossy bells and whistles, and Yuffie’s engaging and well-paced story in INTERmission are a worthwhile investment if you own a PS5. Final Fantasy VII Remake Intergrade is the definite edition of the game. 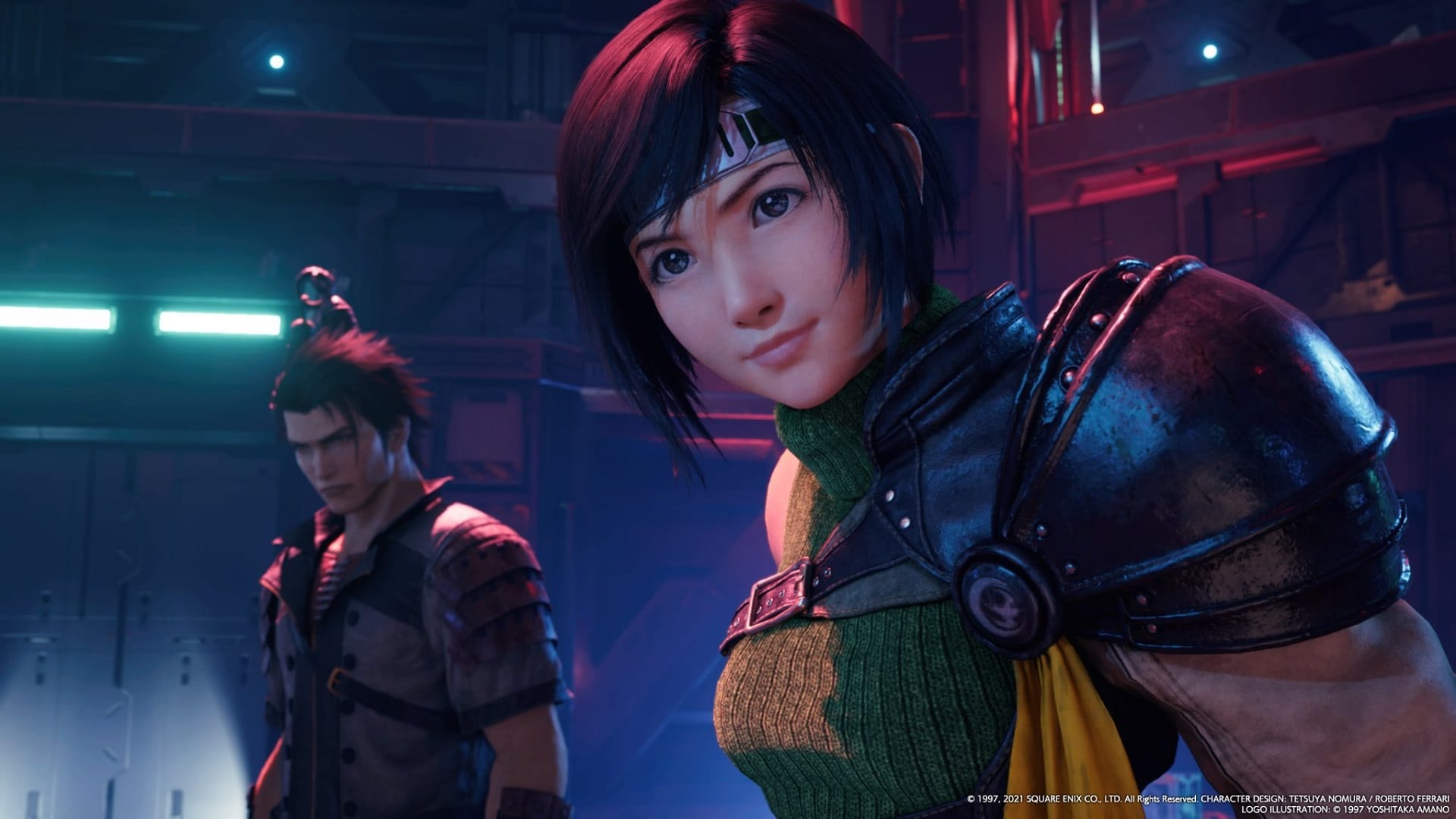 Final Fantasy VII Remake Intergrade – Review
Score Definition
Almost perfect if not for the nitty-gritty. If it’s quite there but not enough to push the boundaries, it’s still an awesome game.
Pros
Yuffie is incredibly fun to play
The main game and Yuffie’s story look better than ever
Sonon is a great addition
Cons
Some areas too familiar
Photo mode could use a few more options
Besides Sonon, the new characters aren’t super memorable
9
Excellent