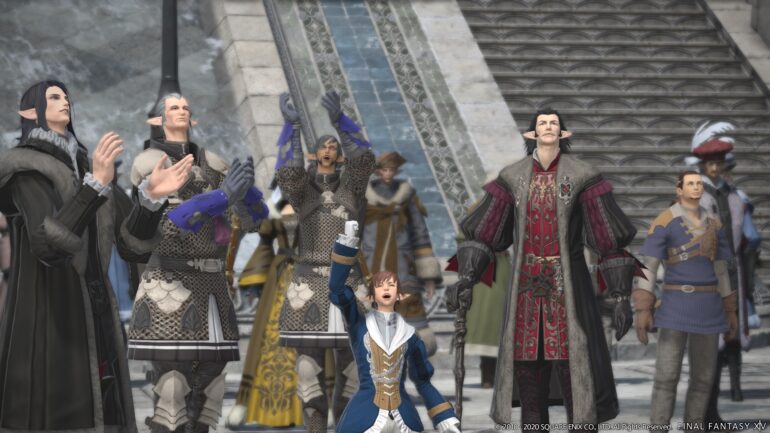 The new update titled Futures Rewritten comes with a lot of new content for players to enjoy like the new Main Scenario quests that see the Scions make their long-awaited return to the Source.

Patch 5.4 will also see the continuation of the Eden raid series featuring a new boss designed by Kingdom Hearts Director and Final Fantasy series veteran Tetsuya Nomura. It has both normal and savage difficulties.

• New Main Scenario Quests – With the fate of the First secured, the Scions make their long-awaited return to the Source. But in the new future they now look towards, will that which is written upon the pages of history be an anthem of hope…or a dirge of despair?
• New Raid Dungeon: Eden’s Promise – The third chapter of this 8-player raid series continues the story of Ryne and her mysterious counterpart Gaia, who have succeeded in restoring balance to the elements of the Empty. Patch 5.4 brings new challenging battles—including a new boss designed by KINGDOM HEARTS® director and FINAL FANTASY series veteran, Tetsuya Nomura—available in both normal and savage difficulties.
• Chronicles of a New Era – The Sorrow of Werlyt Updates – Players can continue their attempt to thwart the Empire’s warmachina development project alongside Gaius after vanquishing the Sapphire Weapon. However, newly unearthed information alludes to another foe lurking in the shadows: The Emerald Weapon.
• New Trial: Castrum Marinum – With the existence of a warmachina code-named “Emerald” confirmed, it falls to Warriors of Light to spearhead a pre-emptive strike before this menace can be unleashed upon the world. Players can challenge Emerald Weapon in both normal and extreme difficulties.
• New Dungeon: Matoya’s Relict – Players can explore the former workshop of the Archon Matoya alongside fellow adventurers, or a party of non-player characters using the Trust system.
• New Unreal Trial: The Navel (Unreal) – The next powered-up version of an existing primal, Titan, will be unleashed upon level 80 adventurers in Patch 5.4, providing a new challenge and a chance to earn unique prizes.
• New “Explorer Mode” – This new gameplay mode will allow players to take screenshots as they traverse Shadowbringers dungeons, without the danger of enemies. Players can also summon mounts and minions within dungeons using this mode to further enhance their screenshots.
• Ocean Fishing Updates – Two new fishing routes in the Black Shroud and Dravania regions will be added alongside other updates.
• Performance Action Update – Playable instruments have been expanded to include the violin.
• Triple Triad Updates – The popular card game has received a variety of updates and improvements, including UI updates, eased deckbuilding rules for newcomers, and new tournaments. Additionally, players will now have the ability to create their own custom tournaments for up to 8 players, in which they can customize the game rules.
• Crafter and Gatherer Updates – Adjustments to certain crafter actions and a revamp of the collectable and aetherical reduction systems for gatherers, and more will arrive in Patch 5.4.
• Ishgardian Restoration Update (Patch 5.41) – The fourth and final stage of the Restoration of the Holy See of Ishgard will commence, with players working together to help their World complete the restoration.
• “Save the Queen” Update (Patch 5.45) – The next chapter of “Save the Queen” continues the story penned by renowned game designer Yasumi Matsuno (FINAL FANTASY Tactics, FINAL FANTASY XII). The update will also introduce Delubrum Reginae—new large-scale battle content with both a 24-player normal mode and high-difficulty 48-player savage mode for players to undertake.
• Resistance Weapon Updates (Patch 5.45) – Players who complete the Save the Queen questline in Patch 5.45 will be able to further upgrade their Resistance Weapons an additional two tiers. The second upgrade tier will also allow players to customise certain parameters on the weapon to match their playstyle.
• Blue Mage Update (Patch 5.45) – The limited job will receive a number of new updates, including an increased level cap to 70, new blue magic to learn from enemies, new job-specific equipment, and additions to the Blue Mage Log.
• Skysteel Tool Update (Patch 5.45) – Disciples of the Land and Hand can further upgrade their Skysteel Tools to aid in crafting and gathering.
• Adjustments to PvE and PvP actions, the addition of quick matches to Doman Mahjong, a new treasure hunt dungeon, new UI skins, and more.
Also, a reminder that Producer and Director Naoki Yoshida announced that there will be a special global livestream event called the Final Fantasy XIV Announcement Showcase. It will be held on February 6, 2021 and will have the latest information and announcements for the title.