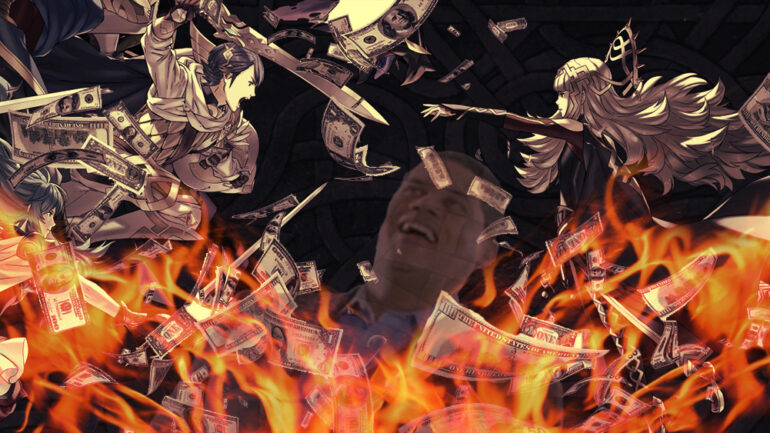 Fire Emblem Heroes is on fire, not literally of course. Less than a week after the game launched it raked in over 5 million USD (249 million PHP), and games media has given it the seal of approval for having a “balanced” free to play model. Then reports of people spending up to 1,000 USD to get the characters they want, and now complaints on how much grind the game has. Fire Emblem Heroes is a Japanese mobile game at heart, and who can blame them for following a successful model.

The business model is never demands money, yet provides a constant flow of brand new content to the players. It even gives rewards for simply logging onto the game every day. Paying is very much optional. Sounds better than the big paywalls that have become the stereotype of Western free to play mobile games right? Well, there is a dark side to the Japanese model.

There are three kinds of customers in the market: the whales, the regular paying players and non-paying players. Whales are considered the top 5% of a game’s population, the hard core audience of the game. They are the ones who spend the most time playing and the most money on it. The remaining 95% can then be further segregated into the regular paying players and the non-payers. There is no exact data on how much money both of the paying groups spend, but there is data on who funds the developer, and it is the whale. In some games alone, they can make up to 90% of the total revenue, which is pretty mind boggling. The question in your mind right now is how can such a small population literally fund a game? The answer is the key mechanic, which is the gatcha system.

The commonality between the various Japanese mobile games is the gachapon system which is based a type of vending machine which randomly dispenses toys. In the mobile game context, you replace toys with game character and/or items which are given a percentage to “drop” or appear. For example, a 5* character from Fire Emblem Heroes has either a 3.0% to 3.5% of dropping, to which the remaining 97% or so percent is the rest of the other rarity of characters. Then of course you have the “limited time” gatcha, which as the title states will only drop for a limited amount of time and never again for a logn time. With that said, the primarily lure of the mobage titles are the cast of characters the game has, and if it has a big already existing IP to use, the easier it is to get people to play the game due to already recognized characters. Mind you these are not just images of a character to look at, these are professionally voiced acted characters, and speaking of their drawings, also professionally drawn. You see, no expense was spared, and in such a competitive market like Japan, first impressions counts. If you have a popular manga artist and voice actor, it is a killer combination as fans of both would flock to the game. You could say the gatcha is key and character is the keyhole, and opening the door leads to a lot of profit.

It is these same characters that drive some players to splurge their money on the game. You put your money in, you go “roll” the gatcha in hopes of getting the character and if you do get it, good, but if you do not get it, just keep on rolling. It does sound oddly like gambling does it not? This is why mobage games currently sit in a grey area in Japan, a country with a hardline stance against gambling (with certain exemptions): it is not gambling in anyway, yet it is gambling in its own way. There is outcry though and calls for regulations on mobile games exploiting the business model, particularly after one person spent 6,000 USD on a game just to get a character from a limited time gatcha. So who is exactly accountable?

No one. The players themselves find the games as their hobby, and as with any hobby it can get pretty expensive (I would know, I have my own hobbies to fund and they are really expensive). The developers/publishers on the other hand are not breaking any laws and also provide quality content for a free to play game. I openly admit I do enjoy these games, and have put some money into some while I play for free on others. In a perfect world I wish all free to play games can be like Kantai Collection or Touken Ranbu (two games which can literally  be played without paying a single dime), but the fact of the matter is the games themselves are not profitable and all profit originates from merchandise sales. At the end of the day, the issue still sits in a grey area unless Japan’s law states otherwise.