Short, but it left so many questions. 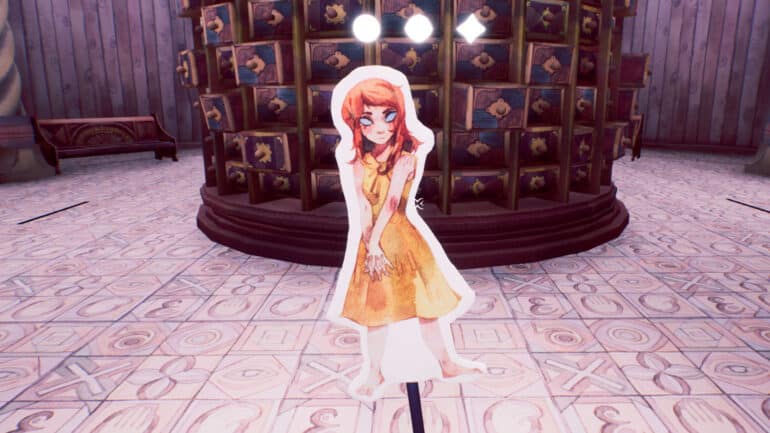 I suddenly find myself seated alone, in front of a stage and in a middle of a play. Then, I was asked to make a choice. Am I directing this play? Why am I whisked into this train bound towards this patchy-looking tower? Why is there a disembodied voice that’s talking to me and claiming that he’s me? These were just some of the questions that ran through my mind as I tried out the demo for Flawless Abbey.

Flawless Abbey is a story-driven, point-and-click game developed by Bed Head Games and published by CRITICAL REFLEX where you explore through the seemingly alive Labyrinth Tower and discover the secrets within.

The demo showcases the first 15 to 20 minutes of the game where you get to learn the controls, solve a puzzle, and get to interact with some of the aspects and a character in the game.

Starting off with the world of Flawless Abbey and how it looks, the hand-painted art style gives such a great impression as if you are actually inside a storybook. At least within the span of the demo, you only get to meet a few characters; one is the disembodied voice of Penn Sveelar, and the others are cardboard cut-outs of people and mannequins.

It is as if you are in some liminal space; lifeless, yet in a way still lively because of all the movement coming from what are supposed to be inanimate objects.

As for the story, I have yet to get what the gist is and what was my purpose for being in the Labyrinth Tower. But for the short span of the demo, it did pique my interest at some points, especially during the loop scene where the voice of Penn was talking to me as I ran through an impossibly-structured hallway. He told me to find two people and never wake up until I find at least one of them. It was one of those points where it made me ask if this was all a dream, or if I’m in some sort of a simulated reality.

Then there’s this other girl, who is basically just a cardboard cut-out, who served as the guide on the latter half of the demo. She didn’t give a name, yet our conversation lines imply that we must have known each other for a while. Though to be honest, she looked kinda creepy, the “tone” of her replies felt like she had a bright attitude. There was a lot more that I would have wanted to know about her. I guess it’s going to be a mystery for now.

Lastly, a name was mentioned: the Abbess. I was supposed to meet her. The girl mentioned her importance to the tower, painting her as a benevolent being; but is she really? What even is the tower for?

The demo left me with all these questions, and I do hope that the main game will manage to maintain this aura of mystery on its release. It gave just enough of an itch to encourage me to progress through the story and want to know more about it. From what I experienced, that was just a glimpse of what I hope is an intricate story with satisfying endings.

Speaking of endings, Flawless Abbey presented itself as a game where your actions matter and that they can change the narrative of your story. So far, there was only one choice dialogue presented in the game, but because this is just the demo, I have yet to see if that choice made an impact. There was also one more thing which we are not sure if it was intentional or not – more on that later.

When it comes to the gameplay, Flawless Abbey’s first puzzle was a neat and interactive one. It did take me a couple of minutes to get it and I actually went for the harder solution when there was actually an easier and effortless one if I only had paid attention. There were also some symbols shown which I’m sure will be important somewhere down the story.

As for the controls aspect of the gameplay, it provided much more freedom than just the ones you get from a point-and-click experience. That’s a good thing, but that was the part where I struggled the most in this demo.

Going back to the second story-impacting thing I briefly mentioned, there was this part where I had to crank around a lever to operate the revolving room of the tower. At this point, I’ve already cranked levers at least three times. What is different at this part is that I have to match the tempo of the turning motion, or else the Star-Key in the middle will gradually break as it hits against the gear’s teeth.

Everything works well at first until you falter and hear the screeching noise as the key touches a tooth and one of its arms snaps off. It all goes downhill from there as all five arms of the Star-Key go one by one. Thankfully, I was given another chance. But I squandered that second chance. I was expecting another Star-Key to show up, but the broken key remained.

Was there something else that I was supposed to do? Not that I know of, and I spent a good amount of minutes checking every corner of the room I was in for any hints or whatnot. Eventually, I had to go through the usual troubleshooting, but to no avail. The save system has not been implemented in this demo yet, so I had to go through another 10 or so minutes for another two attempts.

Going back to the controls, the free turning motion actually became detrimental towards that specific activity because it made the turning speed too janky. It felt like I was doing a lockpicking activity. It didn’t help that my cursor disappeared as I started cranking. The translation of my mouse’s circular movement from the Z/X axis to the X/Y axis was a bit awkward that once my cursor drifts off the path by a tiny bit, it messes up the momentum.

If I could make a recommendation to make this kind of activity a bit more manageable, I would say keep the cursor visible as it would help us visualize drawing a circle. I’m sure this kind of activity was meant and was designed to be challenging, and I’m sure that having the ability to reload from a safe state would help mitigate the frustration of starting all over. But I don’t think that that particular activity was designed to be solved by moving the crank inch by inch; which was what I did to get through after multiple attempts.

Nevertheless, that was just a minor issue and it turned out well by the end of the demo (which was right after I solved that activity). The interactivity between me and the surroundings was linear, though that might not be the case on the full release.

Overall, the demo experience made me want to revisit the game on its full release. There were just so many questions left out in the open now that I’m compelled to know the answer and get some closure to the story. I’d say that the demo served its purpose and did a great job. I’m looking forward to uncovering more mysteries from the Labyrinth Tower and to less janky cranks.

Flawless Abbey will be coming out soon. Check out the game’s Steam page for more information about it and consider adding it to your wishlist.