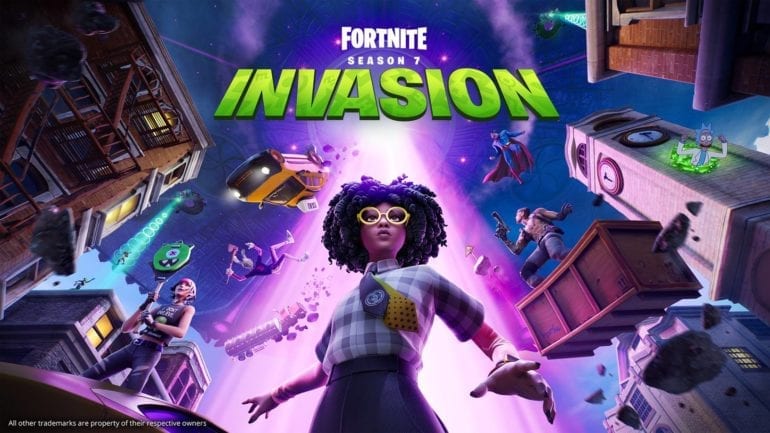 Chapter 2 Season 7: Invasion involves flying UFOs and some weird collaborations with Rick and Morty, and Superman. These UFOs are above certain POIs in each match and shooting down one will give players a chance to pilot it and use it for attack others.

There are several new weapons introduced this time around like the Pulse Rifle, Rail Gun, and the Pulse Scanner. Somehow, they look like weapons from the XCOM series. The aliens have the Kymera Ray Gun, which fires a continuous beam and will only stop to recharge.

For the Battle Pass, the Battle Stars make their return. Collect them as players level up and use those to claim rewards in the order they want them. By claiming rewards or reaching certain Levels, they will be able to unlock additional pages of rewards to claim.

Here are the Outfits that players can unlock in this Season’s Battle pass:

● Kymera: The customizable extraterrestrial. Make him your own throughout the Season! (Unlocked immediately upon obtaining the Battle Pass.)
● Sunny: The rockstar who wants off this rock.
● Guggimon: Fashion horror artist. Kind of into the chaos.
● Joey: Double agent. Unlock their built-in Emote to switch between Human and Alien.
● Zyg: Ferocious battledroid made by the mind-controlling Alien Choppy. Put on Choppy as a Back Bling!
● Doctor Slone: The one and only.
● Rick Sanchez: Intergalactic traveler and the Rickest Rick.
● Superman: Few better to help save the day. Arriving later in the Season for players to unlock.

Members of PlayStation Plus can enjoy the PS Plus Celebration Pack. Get an Outfit and Back Bling for this. It includes:

Fortnite is now available on PC, Android, Nintendo Switch, PS4, and Xbox One.