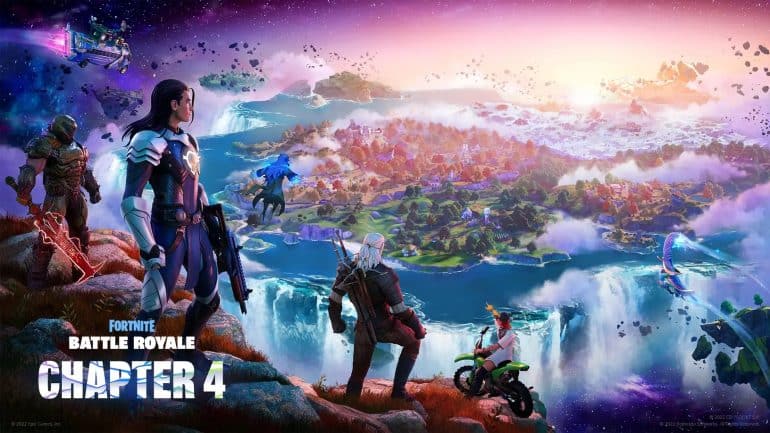 The new season is here, Chapter 4 Season 1, for the popular battle royale video game Fortnite. With its launch comes a new Battle Pass, new skins, and a lot of new content.

The Island is now new after Chapter 3’s finale. Players will be able to explore new areas like the Brutal Bastion, The Citadel ruled by The Ageless, the Shattered Slabs, the mining facility, and more.

Aside from new areas, a new ride has been introduced, a dirt bike. It is quite a powerful travel companion due to its speed and agility. It is called the Trail Thrasher.

With Fortnite Chapter 4 Season 1, players will be granted a randomized choice of two Reality Augments at different intervals during a match. The longer one survives a match, the more Reality Augments will be collected. It can allow players to drive without using fuel, get new weapons, redeploy a glider, and more.

When players try to sprint at an obstacle, they can now hurdle over or onto them. Get creative by combining sprinting, mantling, and hurdling.

Stay on the point-of-interest’s capture point to capture it. When captured, it will be displayed on the team’s Banners, which will let other teams know who controls which areas. Capturing a POI will reward players with loot and Chests and opponents will be marked for easier discovery.

Use nature to the players’ advantage, like Slap Berries, to gain Effective Health and short-term unlimited Energy regen. Make a large snowball and roll inside it to disguise yourself, or use Kinetic Ore for some crazy magic.

Chapter 4 Season 1 Battle Pass introduces a new cast of combatants. Purchase it to unlock the Selene Outfit right away and by progressing in the Battle Pass to unlock more Outfits like the ruler The Ageless, the Doom Slayer, and more. Later in the Season, it will introduce the popular The Witcher character Geralt of Rivia, the surprise collaboration content.

Fortnite will now be using the full power of Unreal Engine 5 and the new features of Unreal Engine 5.1. It introduces a big jump in visual fidelity, fully immersive worlds, and more. It features Nanite, Lumen, Virtual Shadow Maps, and Temporal Super Resolution.