Another batch Naruto guys coming to the game soon. 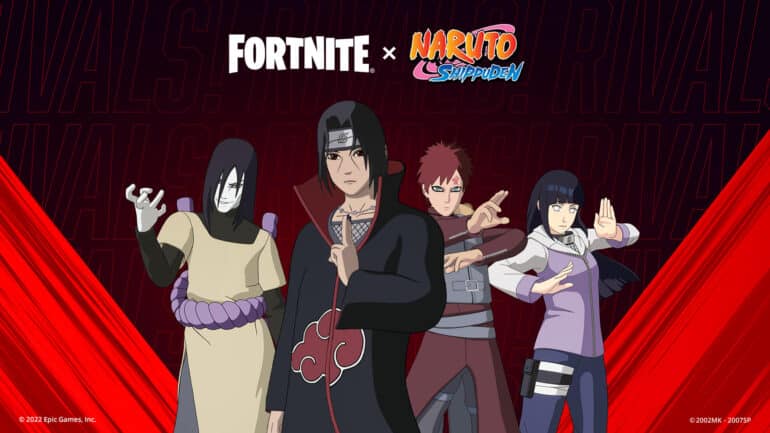 Some of Naruto’s friends and foes will be joining the rest of Team 7 on the Island this coming June 23, 2022 at 8 PM ET in the Item Shop. The characters joining will be Orochimaru, Itachi, Gaara, and Hinata.

Itachi Uchiha is a former child prodigy who became the youngest Shinobi to join the Hidden Leaf Village Special Assassination and Tactical Squad or the ANBU Black Ops. He was just 11 years old at that time.

Itachi uses the Mangekyo Sharingan to put someone in a Genjutsu or an illusion technique. The victim is stuck in an illusion. He was a genius and uses this technique, making him one of the scariest shinobi to fight against. After the massacre of the Uchiha clan, he then joined the Akatsuki for certain purposes.

Orochimaru is one of the three Legendary Sanin and a former shinobi of the Hidden Leaf Village. He left the village to make his own, the Hidden Sound Village.

The biggest ambition of Orochimaru is to learn all Jutsus and have enough lives to live through it all. He has used several forbidden jutsu on himself and made experiments on his followers and some unwilling victims. He is well-known for his use of snakes and serpent-like looks. He sheds his skin like a snake and summons Manda, the giant booss snake from Ryuchi Cave.

Hinata is a shinobi from the Hyuga clan, known for the Byakugan, a powerful eye technique. She admires and is in love with Naruto, but is shy towards others and easily faints when her love interest is confronting her. In the end, she became his wife and bore two children, Boruto and Himiwari.

The Rivals have alternate outfits to choose from:

Get the Itachi and Orochimaru Bundle that will contain the Itachi Uchiha Outfit, Black Ops Mask, Orochimaru Outfit and the Islandbound Ninja Loading Screen.

Starting June 23, 2022 at 8 PM ET, until July 7, 2022, 8 PM ET, players can go back to the Konohagakure, the Hidden Leaf village. Players can explore the Hokage Residences, Ichiraku, and the Hospital.

Complete quests from Naruto, Sasuke, Sakura, and Kakashi to gain experience and unlock other iconic locations like the Final Valley, the Chunin Exam arena, and Naruto’s mind space with Kurama.

To enter the village map, just select the Hidden Leaf Village Adventure tile in the Discovery tab or enter the code 0610-6440-1958.

The Nindo Community Challenges make a comeback on June 21, 2022 at 4 AM ET. Unlock the paths of Itachi, Gaara, Orochimaru, and Hinata by completing their tasks in either Fortnite Battle Royale or Fortnite Zero Build. Unlock emoticons and ultimate rewards of the Akatsuki Wrap and Manda Glider.