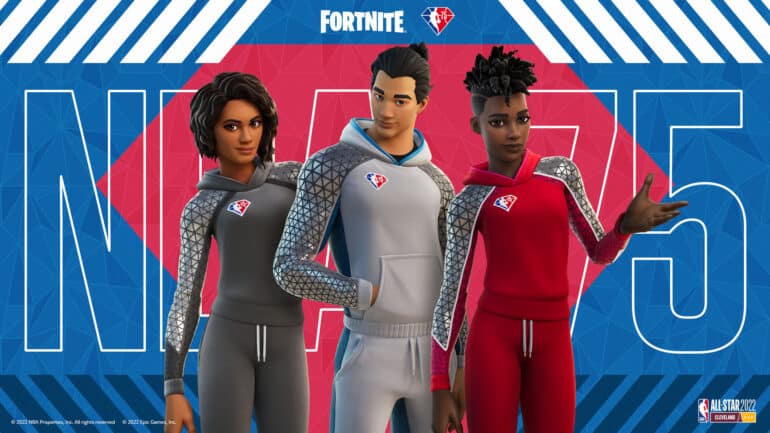 To celebrate NBA’s 75th Anniversary Season and NBA All-Star 2022, NBA has now collaborated with Fortnite for a new voting event.

This is the first time that Fortnite players will be able to vote for which NBA celebration they would like to see turned into a future Emote in the game. While the NBA-All Star Game fan voting has already ended, this is their chance to enter once more for another voting event. They can now start voting in the NBA 75 All-Star Hub, which was made by creator team Atlas Creative.

Fans get to choose between three iconic celebrations of members of the 2022 NBA All-Star team who are Trae Young, Joel Embiid, and Giannis Antetokounmpo. Better hurry because The All-Star Hub will end on February 23, 2022 at 10 AM ET. They can check out the indoor and outdoor basketball courts, photo booths, and lounge areas. The outside area is part of the NBA Lane, which is inspired from the NBA’s season-long campaign in celebration of NBA 75.

Players can get to wear the NBA 75 warmups with the new NBA 75 set. They can also wear a uniform from any NBA team with the In The Paint Set. There are ten outfits here that will come with uniforms of all 30 NBA teams. There are also two new uniforms to commemorate the Hub: All-Star ’22 Red and All-Star ’22 Gray. There is also the NBA Beacon Back Bling.