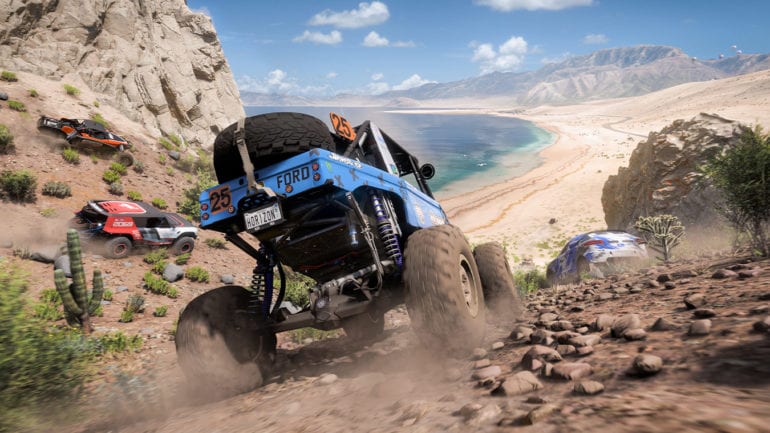 Game studio Playground Games has recently shared details about the different Forza Horizon 5 biomes and seasons in the game.

Mexico is the next location for the latest Forza Horizon entry and it has a very diverse locale that the game developers can expand on. From a living desert to a volcano’s peak, Playground Games felt like this is going to be their biggest game yet.

“We knew from the beginning that we wanted this to be the biggest Forza Horizon yet. However, if we wanted to be the biggest, then we felt we also needed to offer the most diversity and contrast as well,” says Mike Brown, Creative Director of Forza Horizon at Playground Games. “Mexico is almost like the whole world in one country: snowy peaks, tropical jungles, epic canyons, beautiful beaches, ancient architecture, and modern cities. When you add on Mexico’s incredible culture – the music, the art, the history, the people – there is no more exciting location for the Horizon Festival.”

The developers have broken down Mexico into 11 distinct and unique biomes and each of them have been researched and recreated by them.

“Our team collects reference from the location and creates concept images that highlight the beauty and unique detail for each biome. We employ techniques such as photogrammetry to recreate the environment with precision accuracy,” says Don Arceta, Art Director for Forza Horizon 5 at Playground Games. “And we bring the beauty of the world in, through the sights and sounds you’ll find throughout every area. The goal of the artistic process is to make it feel like you’re really there.”

Fans will expect the Seasons to be coming back, which will add a new layer of diversity and complexity to the experience compared to previous titles. Each of these 11 unique biomes will transition through the seasons differently, giving players quite the experience.

Check out the various Forza Horizon 5 biomes to visit via Xbox News Wire:

You might recognize this as the biome that was shown in the Forza Horizon 5 reveal trailer in June. It’s filled with rock formations patterned with unique striations, many of which erode into hoodoos that are only found in the canyon. Fun fact: each of the biomes have unique audio and the canyon has more echoes than any of the others.

This might be what you think of when you imagine a tropical Mexican vacation. Filled with palm trees, seagulls, white sand beaches and calm waters, it feels a lot like a postcard come to life. At least that’s the case until you reach storm season, which completely changes how you need to navigate it. Watch out for flying palm trees!

Unlike the flatter or drier farmland found in some of the previous Forza Horizon games, these rolling hills are filled with lush vegetation, fruit-bearing trees, and wide, shallow rivers. You’ll have plenty of fences to smash through and picturesque homesteads to explore while you’re cruising through here.

As you might suspect given the name, this biome is full of dry grasses on rolling hills and plains, providing plenty of open spaces to drive across if you feel like off-roading. One of the coolest features in this biome is a lake that actually dries up in the winter season, opening up shortcuts via fast passages and secret areas.

Filled with lush, dense vegetation and towering trees that let beautiful rays of sun through the canopy, this biome also sports some impressive waterfalls and winding rivers. There are also a number of hidden temples in this area, all of which are based on real locations in Mexico.

In a first for the Forza Horizon series, Forza Horizon 5 features a cactus desert that’s full of towering saguaros. There are also a number of rock formations and rock piles that are unique to the area. As the name implies, it’s full of life and features plenty of flowers and wildlife.

While the tropical coast features lots of trees and vegetation, this one has a completely different vibe. Since there aren’t many trees, you’ll get a full view of the ocean and some excellent views of the sun setting at the end of the day. As a bonus to all you golfers out there, you can even take a spin around (read: through) a golf course.

Full of towering sand dunes, this biome is perfect for cruising around in a buggy and carving into the sand. If you don’t feel like getting sand between your toes, many of the roads in this area feature long straightaways so there are plenty of opportunities to see how fast your favorite ride really goes.

Although a swamp might not sound like the best place for a race, this biome’s shallow waters are a great place for it.   The swamp also features a lot of mangrove trees that sport very thick, interconnected roots. You can actually smash through these during races, changing the route depending on whether or not your car can handle it.

Like a number of cities in Mexico, there’s a good deal of amazing architecture and vibrant colors everywhere you look. Unlike a lot of cities, however, it features a lot of rolling hills and tunnels, making for some really fun race routes. As with the Canyon, you’ll hear plenty of echoes bouncing around the city’s tight roadways.

In another first for the Forza Horizon series, this massive mountain is situated right next to the Living Desert. It’s a very high-altitude volcano, so driving to the top is a unique experience that rewards players by seeing way off into the horizon. This is also the only place in the game that you’ll encounter snow, so be sure to pack an extra jacket.

The biomes will definitely be a delight to race in upcoming Forza Horizon 5. It will be released on November 9, 2021 for Xbox Series X/S, Xbox One, and PC via Windows and Steam. It will also be available on Xbox Game Pass including console, PC and Cloud Game (Beta).