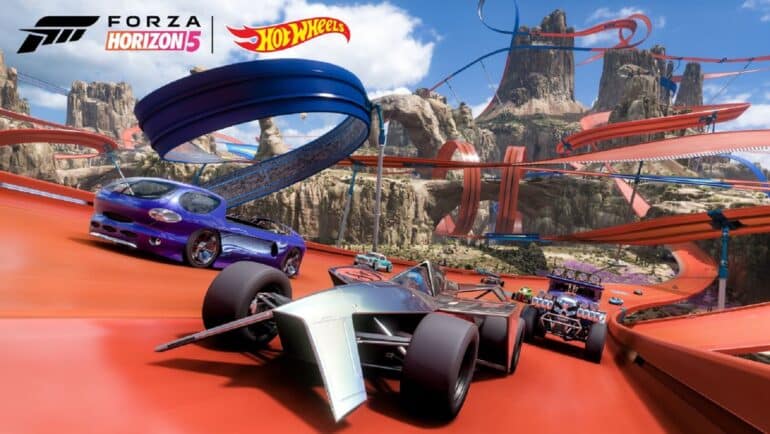 So, which cars will be included in the Forza Horizon 5 Hot Wheels DLC cars? Worry not since we’ve got you covered and compiled a list below for all of the new Hot Wheels cars that you get if you end up buying the expansion.

Here’s the list and images of 10 new collectible cars that will be added to Forza Horizon 5 in the July Hot Wheels Expansion.

Deora II Designer Nathan Proch drew inspiration from a 1996 Ford Taurus station wagon’s rear end. In contrast to the sharp lines of the original Deora, the Deora II has swoopy curves. In celebration of Hot Wheels’ 35th anniversary in 2003, a 1:1 scale Deora II was made.

The body and base of this open-wheel race car concept from Thailand are made of metal, while the interior is plastic and has a wrap-around windshield.

For off-road use, the Baja Bone Shaker is a heavily modified casting of the original Bone Shaker. The rear spare tire is always an OR6SP wheel, regardless of which wheelset the model is equipped with. As part of a 2016 redesign, the spare tire storage area was incorporated into the body of the vehicle, with the wheel’s chrome-plated spokes.

Designed by General Motors, this factory-built dragster was made for racing, thanks to its fire-breathing V8 under the hood. Twin wheelie bars and a rear drag chute keep everything under control as this muscle car rips through the time-trials.

In 1969, Hot Wheels introduced the Brabham Repco F1 based on the Brabham racing car. A Repco motor provides the power. Series Grand Prix 1, the first ever, included this race. A metal ‘Collector’s Button’ was included with each set of Cars.

The 1993 Schuppan 962CR is the mystery car in one of the vehicles listed above. We’ve seen some stunning photos, but we won’t know for sure whether Playground Games has created yet another masterpiece until the game is released in its entirety. Additionally, those who purchase the Premium Add-ons Bundle, the Expansions Bundle, or the Premium Edition of the game will be able to access the DLC on day one of release.

How do you get the Hot Wheels cars in Forza Horizon 5?

Forza Horizon 5: Hot Wheels Expansion will be available for Xbox One, Xbox Series X|S, and PC on July 19, 2022. The new DLC and any bundles that include it will be discounted for Xbox Game Pass, PC Game Pass, and Xbox Game Pass Ultimate subscribers as well as through Xbox Cloud Gaming, for $20 USD. It is included in the Premium Add-Ons Bundle, the Expansions Bundle or the game’s Premium Edition.

There are four new areas in the Forza Horizon 5 Hot Wheels DLC:

The Hot Wheels Park is a brand-new attraction located at an altitude of 5,000 feet above Mexico City, with miles of orange track snaking through the sky.

Also check out this awesome video by MitchCactus on How to Unlock ALL NEW Hotwheels Cars in Forza Horizon 5 FOR FREE: