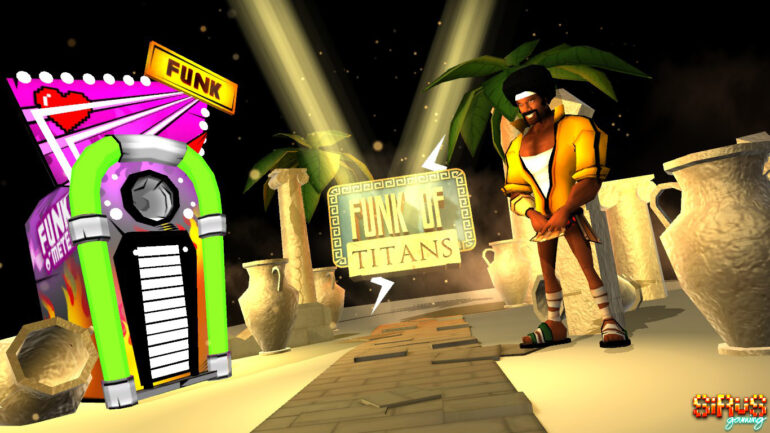 Funk of Titans is an action adventure runner game developed by A Crowd of Monsters and made available to play on the Xbox One and on the PC through Steam. In a world where funk music is the music of the gods and the rhythm that is danced upon by each and every living creature, other titans have committed blasphemy and created their own forms of rhythms, namely pop, rock, and rap. Players take the role of the funky champion Perseus that was tasked by his father Zeus to get rid of these evils and keep funk music as the one true rhythm across the land. 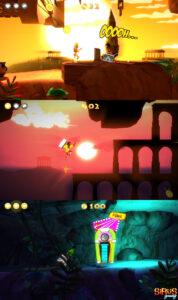 Perseus has to go through levels full of obstacles and enemies with nothing but his funky self. His aim is to reach the gods who are tainting the land with their own music and eradicate them to restore the funk. Once reached, they will face in a dance-off and Perseus has to prove that funk music should be the only music in the land.

The gameplay is just plain basic: Perseus does all the running and players guide Perseus through the corridors and ledges with just jumps and grabs. When dealing with enemies, Perseus either has to jump on them or to bash them. Players do have to be mindful because some ledges can only be reached by jumping on an enemy and taking advantage on the boost it gives. Perseus only has two chances of being hit but he has infinite tries to go through a level. It may take a few tries to pass a level especially when gunning to make a perfect run and trying to achieve the side goals, but the game is paced fast enough that doing a rerun isn’t really much of a hassle.

Doing reruns is part and parcel in Funk of Titans since there are hidden areas in levels that can only be unlocked by a certain gear that Perseus dons and these can be bought with coins collected from every run. These hidden areas usually hide the minigame called Pegasus Idol which is also another quick way of earning coins. The boss fights, on the other hand, is done by playing a follow-the-pattern game in which the player just needs to remember the pattern and hit it according to the beat. 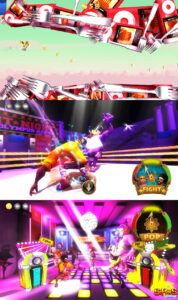 The graphics of Funk of Titans is really lively and colorful. The world design is cartoon-y but it is really nice to look at especially in some levels where the lighting of the environment is given contrast. The music, although it has nothing to do with the gameplay, was nicely done plus it does add to the fast paced feel of the game.

Looking beyond the intricacies of the premise and the music genre usage and it being a fairly short game, Funk of Titans is pretty much an a-ok game for its price. Overall, being a runner game, it does offer a quick challenge for those that are into the genre. The side objective of perfecting the stages is really not that hard to do but it definitely adds a couple more hours of play time. Also, the references and the humor used was light and it added to the whole fun feeling that it tries to give out. Funk of Titans is definitely a must-play that we recommend.

Check out the game’s website here or the Steam page here.