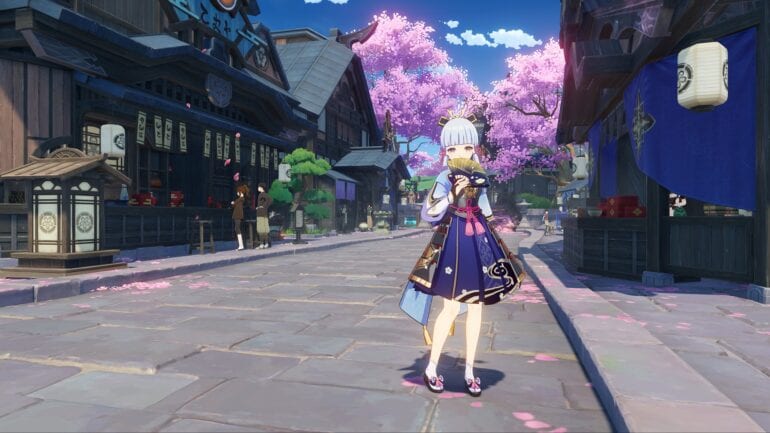 Fertilizer Salesperson is an Inazuma world quest that was supposed to come out by Patch 2.1 of Genshin Impact. It was a quest that was announced by miHoYo as part of the recent update. But no matter what you do, you won’t be able to start it. No one has yet. What gives?

The reason you can’t start Fertilizer Salesperson is due to the fact that the developers haven’t quite rolled out all the planned content for the latest patch of Genshin Impact. Not to worry, it will be coming soon. Like previous large updates from miHoYo, all planned content will be implemented over time.

A lot of things about this specific quest remain in the dark for now. But we do have something useful you might be able to use.

In Rittou, you’ll find a man named Vahid. You’ll recognize him if you’ve ever visited his shop at the Syavushi Bakshesh Shoppe. There’s a commission here where you’ll have to help him out by crafting some fertilizer and then learning how to use it from Konda Densuke. This is the only time in the game where the fertilizer is featured. It’s a good bet that this is where the quest will trigger.

Quest pre-requisite: Complete In Another Land, a World Quest in Inazuma.

Alrani, a scholar at the Sumeru Academia, is working on a term paper for her class. She is currently working on her third rewrite during the world quest In Another Land. Dvalin had attacked Mondstadt and she wanted to write about it, especially about the Four Winds. Later, she decided to visit the Liyue region and decided to write her paper on the Traveler’s ability to control the Elements without a Vision in Endless Research after being rescued from some Treasure Hoarders in And This Treasure Goes To… It’s not long before her paper is rejected by her tutor and she’s off to other places to research more things for her thesis.

How to Start Fertilizer Salesperson Quest

Find Iwata in Watatsumi Island, as she appears to be having some troubles.

Talk to Iwata and you will find out that Iwata is trying to make some fertilizer to be able to plant more crops in Watatsumi Island since she can’t go to Ritou to purchase some. She was in the middle of making the fertilizer when the monsters attacked, so you have to defeat all of them.

The next day you have to return and appraise the fertilizer situation. A general named Gorou comes along because he received complaints from residents nearby for what seems to be a presence of some terrifying stench. That same stench, which may have attracted the monsters that previously attacked, was coming from the pile of fertilizer Iwata was making.

General Gorou also mentions an investigation for a suspicious character calling herself the “fertilizer salesperson”. Upon the mention of that, Paimon can’t help but feel that it’s someone familiar but couldn’t quite remember who as of the moment.

A series of events unfolded where Alrani was arrested by some soldiers because she was mistaken for the suspicious fertilizer salesperson, as she can’t help but take notes of everything and collect materials for her thesis.

She had to prove her innocence by seeking help from a previous colleague and fellow researcher from Academia, named Kaushik. Kaushik puts in a good word for her and General Gorou believes him. Gorou requested Alrani to assist Iwata with the fertilizer research, and at the same time keep an eye out for a suspicious person – “the fertilizer salesperson”.

The location is Watatsumi Island. At the center of the island, surrounded by mountains and waterfalls, is the Sangonomiya Shrine. This quest should pave the way to the introduction of Genshin Impact’s next character, Sangonomiya Kokomi.

Kokomi’s Banner will be released on September 21, 2021. It will be the second banner of Version 2.1. Sangonomiya Kokomi is the Divine Priestess and supreme leader of Watatsumi Island.

Just like many new quests in Genshin Impact in which Travelers can gain a lot of rewards, the completion of this quest will reward you with the following:

This is a work in progress and we’ll make sure to update the information for the latest intel.

If you’re looking for the Storytelling Method World Quest, check it here.