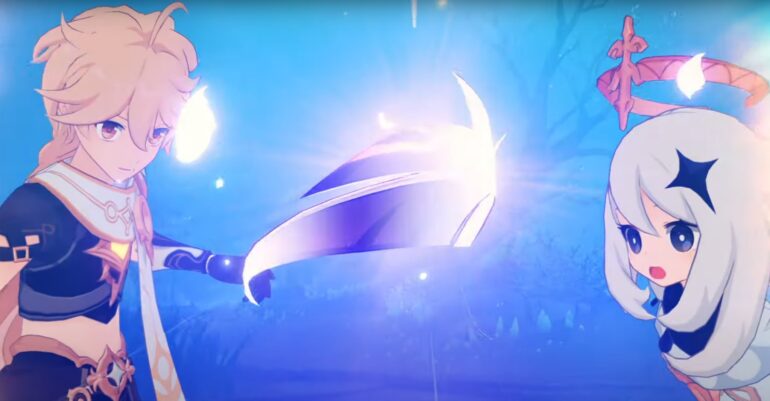 Travelers have just recently discovered Tsurumi Island and they’re ready to clear the mist surrounding it. The quest is the second quest of the Through the Mist questline.

Requirements for Octave of the Maushiro World Quest

Remember the Peculiar Pinion that you got from Seirai Stormchasers? Well, that item will become a gadget for this quest.

How to start the Octave of the Maushiro World Quest

To start the quest we’ll need to talk to Sumida who is in Inazuma City, you will then go back to Tsurumi Island. Head to the marked location and find Ruu. Ruu introduces Travelers to the Thunderbird and mysterious carvings in Tsurumi and your new gadget will be needed to interact with them.

The feather will glow when Travelers encounter something that you can interact with. The Mysterious Carvings will reveal hidden rooms and the Thunderbird statues will reveal secrets.

How to complete the Octave of the Maushiro World Quest

Once you get the gadget, interact with the statue then talk with the illusion which would point you to where the Maushiro is. Follow the instructions until you’re able to reach the Wakuka Shoal puzzle. Use the gadget on the Mysterious Carving in order to spawn an Electro Seelie. Follow the Seelie until it spawns another Mysterious Carving for you to use your gadget on.

An Ishine Script will then appear on the cliff wall. Go back to the first thunderbird statue then you hit the stones in the order the script tells you to.

Your next destination will be at Oina Beach which you can reach by teleporting to the Autake Plains North waypoint. Solve the puzzle by moving the stones in front of the tiles that have the same script.

Now to head to Autake Plains, do note that the area is covered by a thick fog and staying in the fog for too long will lead to Travelers getting teleported somewhere else. Follow the Stormstone path until you see a Bird Statue. Use the gadget near it to spawn illusions to trigger a cutscene.

Use the gadget again on the next Thunderbird statue. The new script is missing some stones but the three Seelies that spawned will guide Travelers to find the lost pieces. Once you’ve placed the three Autake Slates at their respective spots, you’ll notice a pattern appearing on the wall just behind the Thunderbird statue. Proceed to hit the stones in the same order that you see on the script from top to bottom.

The cutscene plays out and return to the ceremonial site.

Rewards for Octave of the Maushiro World Quest

Return to Inazuma City and talk to Sumida to receive your rewards.

Here are the following rewards for the quest:

Here’s a video guide for the quest courtesy of YouTuber Noxxis Gaming:

Here’s a guide for the first quest of the questline and for more guides on Genshin Impact then check them out here.