Sumeru and all of its contents revealed! 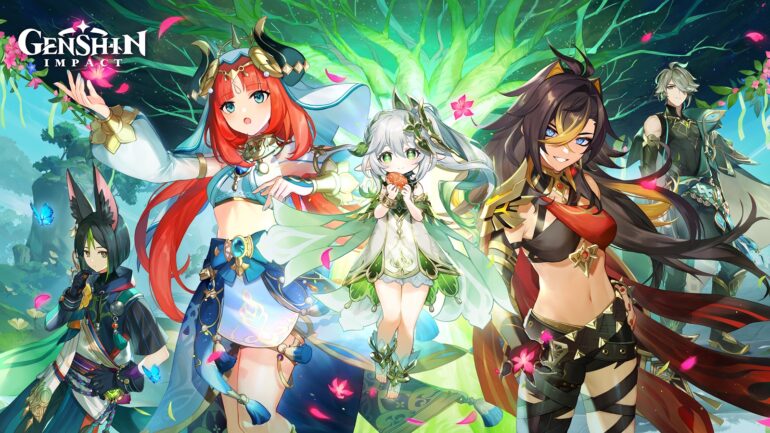 HoYoVerse has recently revealed the details of Genshin Impact The Morn a Thousand Roses Brings expansion and more.

The upcoming new expansion will not just bring the new region Sumeru but also the Dendro element gameplay, the final of the seven elements of the game. Version 3.0 update will be available on August 24, 2022.

Sumeru is located west of Liyue and is dived into two main parts: the rainforest and the desert. When the game first launches, players will be able to explore the dense rainforest and multiple settlements and including Sumeru City and Port Ormos. The land is called the Nation of Wisdom and prides itself on having the prestigious historical institution called the Akademiya. This was founded by scholars loyal to the previous Archon Dendron, the Greater Lord Rukkhadevata.

Lesser Lord Kusanali succeeds the previous Dendro Archon 500 years ago, which makes her the youngest of The Seven. The Akademiya at this time has already come to power as the governing body of the state and has turned knowledge into a resource that is strictly managed.

The Dendro element will become playable in Genshin Impact The Morn a Thousand Roses Brings expansion for the very first time. It can trigger three different basic reactions, which are Burning, Bloom, and Catalyze if used with Pyro, Hydro, and Electro element respectively. Bloom and Catalyze can also evolve into further reactions in battle. For example, if Dendro mixes with Hydro, the Bloom reaction will spawn one or more Dendro Cores, which deals delayed explosive Dendro damage. If the Dendro Cores mix with Pyro or Electro before exploding, it will trigger the Burgeon reaction and increase their AoE Dendro DMG, or it can trigger the Hyperbloom reaction, which turns Dendro Cores into Sprawling Shots that can track down nearby enemies. Catalyze is a combination of Dendro and Electro and can apply the Quicken effect to affected targets and increase their damage taken from the next Dendro or Electro hit by triggering the Spread or Aggravate reaction.

The Sumeru rainforest is filled with plants and creatures with Dendro elements that can take on various polymorphic transformations by coming into contact with the Hydro, Pyro, and Electro elements. Monsters can switch between different states or attack sequences and will have different drops. There are certain mushrooms and plants in the forest that can give useful effects to players. There are Shroom-Kin living in the forest and have evolved into a special species called the Fungi that protect their territories. There is a new boss enemy called the Jadeplue Terrorshroom, which is a type of Fungus. It has a strong animalistic nature and becomes territorial and aggressive when agitated. There is also the Boss enemy Electro Regisvine, who also lives inside the forest.

There will be Dendro characters added to the roster with Genshin Impact The Morn a Thousand Roses Brings expansion. The Traveler can unlock the Dendro ability at the Statue of The Seven in Sumeru and will have the chance to recruit two Dendro archers. The first one is the five-star character Tighnari who is a young researcher and Fest Watcher. Tighnari’s pupil Collei will be joining as well as a four-star character and for a limited time, she can be recruited for free by completing update 3.0’s main seasonal event, the Graven Innocence.

Aside from the Dendro characters, four-star Electro support Dori will be joining the game. Dori is a merchant in Sumeru and can wield a claymore. She can restore HP and energy for nearby team members with her Elemental Burst.

More optimizations and features will be implemented with Genshin Impact The Morn a Thousand Roses Brings to enhance gameplay. Three new tools will be introduced, which are the Boom of the Elder Tree, Ultra-Hot Burner Lamp Test Model, and the Fishing Line Stabilizer.

Genshin Impact The Morn a Thousand Roses Brings launches on August 24, 2022. The game is now available on PC, PS4, PS5, and mobile devices.