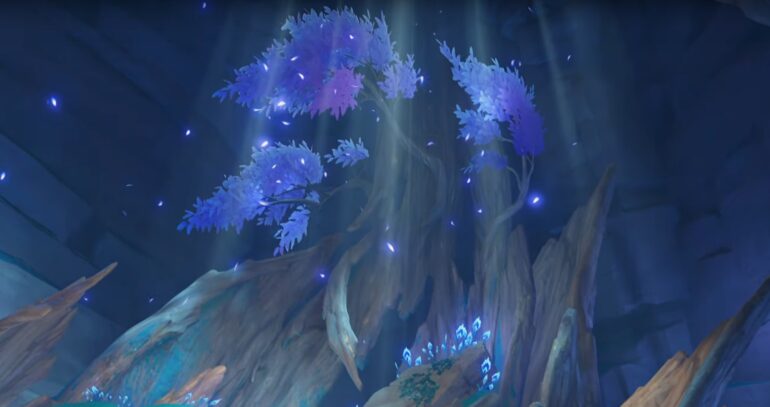 Travelers are getting even more curious as things don’t look good in Tsurumi Island so in order to discover more we’ll be covering the fourth quest for the Through the Mist questline.

Requirements for The Sun-Wheel and Mt. Kanna World Quest

Travelers will need to have cleared the previous quest, The Sea of Fog and the Rite of The Trees, which is the third part of the questline. Do take note that each quest in the series will only be unlocked a day after when the previous quest was completed.

In order to start The Sun-Wheel and Mt. Kanna World Quest, we’ll need to head back to Tsurumi Island and speak to Kama. Cross the big gate to remove some of the red fog on the island and then head to Wakukau Shoal.

How to Complete The Sun-Wheel and Mt. Kanna World Quest

Once we arrive at Wakukau Shoal we’ll need to use the Peculiar Pinion feather on the Thunderbird statue to summon some monsters to feed our EXP. Look for a feather that spawned nearby and interact with it.

Now we head to Oina Beach and use the Pinion again on another statue and another batch of EXP fodder and interact with another feather.

Now we head on over to Autake Plains and repeat the same process.

Now we head on over to Mt. Kanna and check out the altar. It will spawn a Thunder Manifestation that we need to overcome. Keep clear of the middle of the area where it will apply the Wet status less you don’t mind becoming a ragdoll.

Use the Peculiar Pinion again and touch the feather that spawned for a lengthy cutscene. Talk to Ruu and he’ll point you to Seirai Island. Teleport to the waypoint that’s to the right of the Statue of The Seven and jump down below the ledge to trigger a scene.

Now we go back to Mt. Kanna in Tsurumi Island to check out the altar again. Now we have finally cleared the island of its accursed mist.

Rewards for The Sun-Wheel and Mt. Kanna World Quest

We then head back to Inazuma City and find Sumda. After which we head to Kiminami Restaurant which is right beside the blacksmith to continue the closing scenes. And this marks the end of the Through the Mist questline and now we can get our rewards which are:

You can also check out our guides for the first, second, and third quests of the questline, and for more guides on Genshin Impact then check them out here.