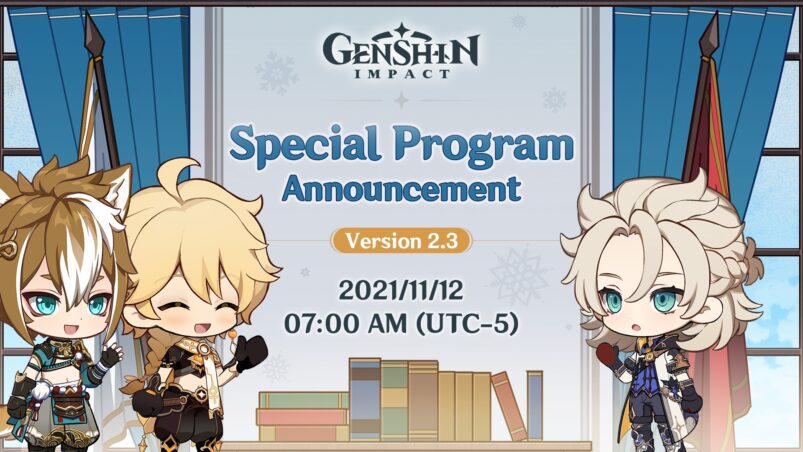 miHoYo recently announced that there will be a Genshin Impact version 2.3 special program announcement soon.

It was revealed that the special program will be going live on the game’s official Twitch channel on November 12, 2021 at 7AM UTC-5. During the livestream, it is expected that there will be new details about the upcoming story development, new events, new characters, and new weapons that will be introduced in the upcoming update, version 2.3.

The promotional art that came with the post on the game’s official Twitter account involves the male Traveler, Gorou, and Albedo. Albedo was a limited character that was introduced to the game in December 2020. Gorou was part of the Inazuma storyline, but was not playable. There were previews of him before as a 4-Star Geo Archer, but there was no sign of him getting added anytime soon.

For some reason though, the promotional art in the Japanese counterpart of the Twitter account of the game has the gang leader Arataki Itto instead of the Traveler. He is a 5-Star Geo character and possibly coming to the game soon. It is possible that Itto and Gorou will be added in the upcoming 2.3 banner in the future, but the addition of Albedo is quite intriguing.

We will have to wait for the livestream this coming Friday for confirmation.