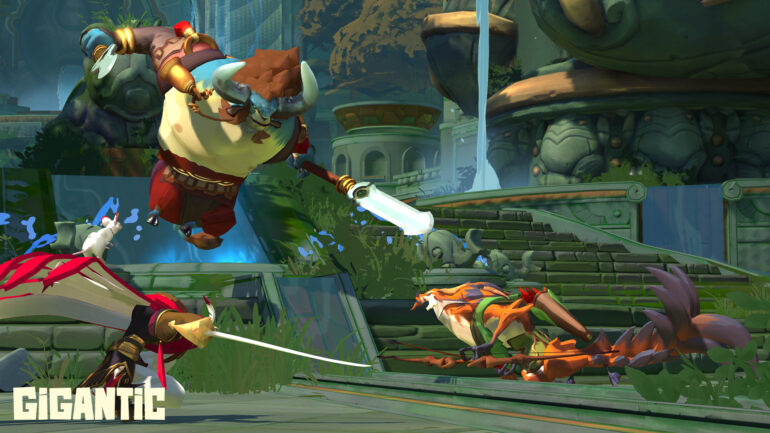 Today Perfect World Entertainment Inc., a leading publisher of free-to-play online games, and Motiga, Inc. announced Gigantic launches on Arc, Steam, Xbox One and Windows 10 on July 20. The free-to-play strategic hero shooter has also expanded the final month of Open Beta to the Arc platform today with new features, allowing even more PC players across the world to battle alongside massive Guardians. Gigantic is also currently available on Xbox One and Windows 10.

Gigantic’s Open Beta received a sizable update today, introducing bot matches, a revamped tutorial, voice chat and new front-end UI. To celebrate the last month of Open Beta, Gigantic is offering a login and play bonus to all players. Starting today, Arc players who log in to the game and play one match will receive an Arc Lightning skin for Tripp, while Xbox One and Windows 10 who do the same can get the Excelsior skin for Tyto the Swift.

Players looking to unlock even more for their Gigantic experience can also purchase the Founder’s Pack, now discounted to $29.99 (down from $39.99), to gain access to all 18 current heroes, two upcoming heroes and additional unique rewards. Valued at over $175, the Founder’s Pack offers a substantial savings to players looking to establish themselves right away and is currently available on Arc, Xbox One and Windows 10, and disappears forever on July 20.

Gigantic is a free-to-play strategic hero shooter developed by Motiga. Gorgeously rendered, lighthearted and charming, Gigantic is for all types of gamers, pitting teams of five heroes and their massive Guardians against each other in epic battles across a variety of maps. The game combines explosive combat with fast-paced teamwork, strategy and skill, as players must work together and fight relentlessly to defeat the opposing Guardian with spells, guns and swords.