Be festive! Enjoy the holiday season! 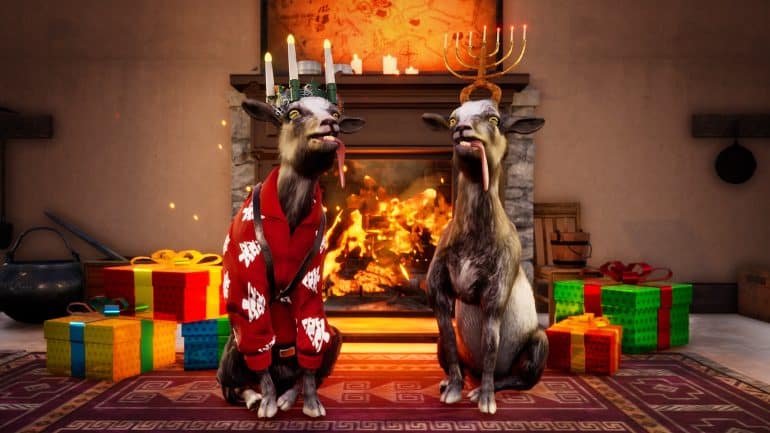 Coffee Stain Studios has recently announced that Goat Simulator 3 will be getting free festive items with a new update.

In the new announcement, the first content update for Goat Simulator AKA The Mandatory Holiday Update was released. This includes nine new items that can be worn by the goats in the game.

Here is a message by Creative Director Santiago Ferrero:

“‘Twas the night before Christmas (or actually a couple weeks prior) and the state of San Angora was a little bit dire. The city was in ruins, the peace had been shaken – all by some goats with chaotic determination.

“In town the four goats stood when all of a sudden, ridiculously festive things started to happen. Upon one’s back a sleigh with sacks magically appeared, turning props and people into presents – how weird!

“Out of the sky and just like that, snow started falling on one goat as they put on a red Santa hat.  Equipped with a cannon which shot christmas lights a-twinkling, each building, tree and hall were decked with wires a-blinking.

“A goat disguised as an elf from head to hoof, threw snowballs which turned into snowmen on each and every roof. Wearing Christmas jumpers, Swedish crowns and even a Menorah on their head, the festive foursome were ready to paint the town red.

“Continuing their mayhem the goats took to the road, the people could only hope they wouldn’t visit their abode. With flying snowballs, presents and buildings glistening with light, thanks to the goats of San Angora there would be no silent night.”

Goat Simulator 3 is out now on PC, PS5, and Xbox Series X/S.