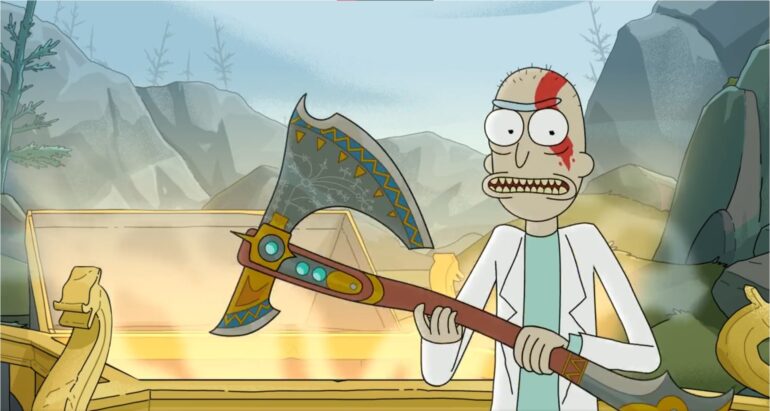 The popular cartoon Rick and Morty has collaborated with PlayStation to deliver an awesome God of War Ragnarök ad.

To celebrate the upcoming launch of God of War Ragnarök, Rick and Morty have joined in the fun, well, Rick to be more precise and forced Morty to join his new adventure into the Nine Realms. They parody the incredible father-son duo Kratos and Atreus by having some similar looks. Rick shaves his head to look like Kratos and even paints the left side of his head with red paint while Morty wields a toy bow and arrow.

After the two discuss God of War Ragnarök, Morty asks Rick about what shaving his head got to do with going on an epic adventure, or why is he even doing this. He is still confused about all of this, but Rick just hands him a toy boy and arrow, opens a portal to the Nine Realms, and pushes him inside.

While in the Nine Realms, Rick finds a magical box where the Leviathan is stored, just like what Kratos uses in the game. Morty is left fending off vicious vultures who are trying to peck him to death. And just like usual, Rick ignores him and marches off while Morty is getting beaten up by the vultures. He also finds the boat Kratos and Atreus ride in the game.