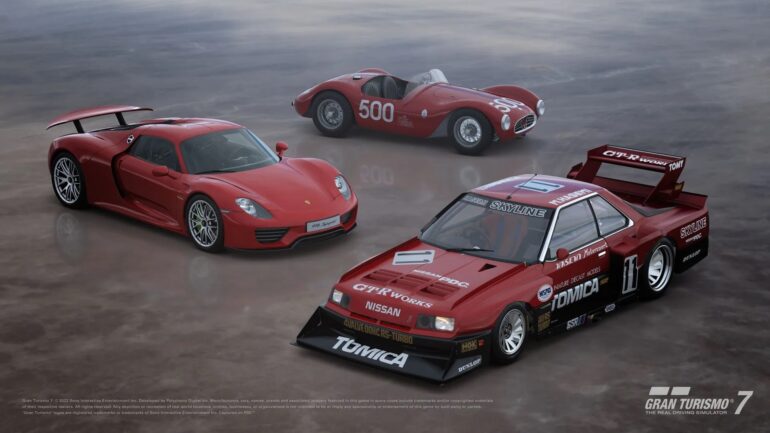 The latest Gran Turismo 7 July update 1.19 has now arrived and will introduce new vehicles to the lineup.

The Gran Turismo 7 July update 1.19 is now available to download on PS4 and PS5. It will now introduce three new vehicles to the Legend Cars and Brand Central lineups. This includes the Nissan Skyline Super Silhouette Group 5 ’84, Maserati A6GCS/53 Spyder ’54, and the Porsche 918 Spyder ’13.

Check out the details for each vehicle below:

The Skyline Super Silhouette is one of the most iconic cars from this series that has a unique look that sets it apart from the rest. It is powered by a 2.1 liter 4 cylinder turbocharged racing engine, a chine spoiler, fenders expanded to both the front and rear, and more. It stood out in races in the 1980’s.

The 2014 winner of the Gran Turismo Trophy was the Maserati A6GCS/53 Spyder, chassis No. 2078. The A6 was the designation for a series of 6-cylinder racing cars developed by Maserati from 1947 to 1956. This was intended for the sports car championship competition and started as a 2-seater version to the classic cigar shaped grand prix cars. With the regulations changed in 1953, a few coachbuilders started to make their own designs for the tubular frame.

This is a supercar that got introduced by Porsche in 2011 and was the successor to the Carrera GT. It was also limited to only 918 cars, which made it quite demanded by car collectors. It has a 599 BHP 4.6L V8 engine, which was based on the engine from the RS Spyder prototype race car and is mounted in the mid-ship position with a single electric motor in the rear. It results in a total system output of 873 BHP.