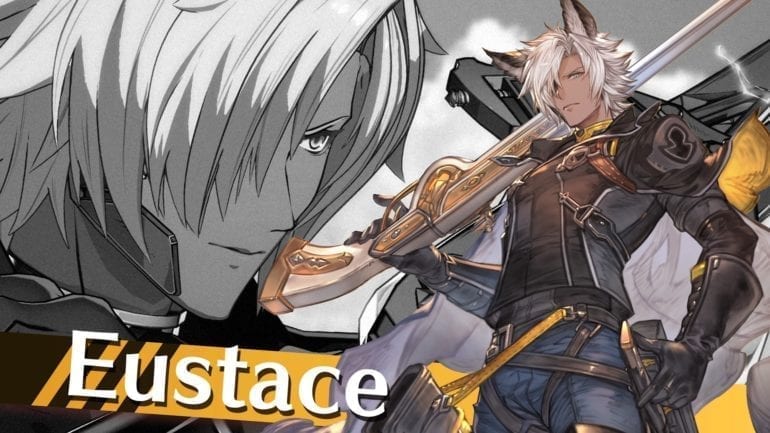 Eustace has finally graced the playable fighter roster on the PlayStation 4 and PC via Steam today. He is the fifth of the six characters in the Character Pass 2 DLC bundle, which is currently priced at $34.99 on PS4 and Steam. He can be purchased individually for $6.99 and the new battle stage Dydroit belt is also available for only $3.99. Battle Pass 3 that launched earlier this month is now available with earnable character colors, weapons skins, and more until May 10.

Lone Wolf Eustace is a man of few words, but will stop at nothing to complete his mission…or pet every doggo. Eustace is skilled with bladed instruments and explosives, but he brings the thunder with his lighting gun, Flamek. Eustace joins the Granblue Fantasy: Versus roster as the first character to use the gun weapon, making him excellent at mid-range and long-range combat by engaging opponents from a distance.

About Granblue Fantasy: Versus
ARC SYSTEM WORKS and Cygames have teamed up to bring the Granblue universe to home consoles in an action-packed head-to-head fighter.

In Granblue Fantasy: Versus, power, skill, and spirit collide in a quest to find the true champion of the sky. Japan’s megahit RPG, Granblue Fantasy has topped the charts, charming players across the globe with a plethora of lovable characters and story-driven mechanics. Granblue Fantasy: Versus will appeal to fans of Granblue lore and fighting games alike with robust solo or co-op gaming options. Fight against AI, fight your friends in local or online two-player matches, or team up in RPG mode and take on waves of enemies and formidable primal beasts.

Developed by Cygames and ARC SYSTEM WORKS and published on PS4™ system in North America and on Windows PC via Steam globally by XSEED Games, Granblue Fantasy: Versus is currently available for purchase for $59.99 on both platforms.