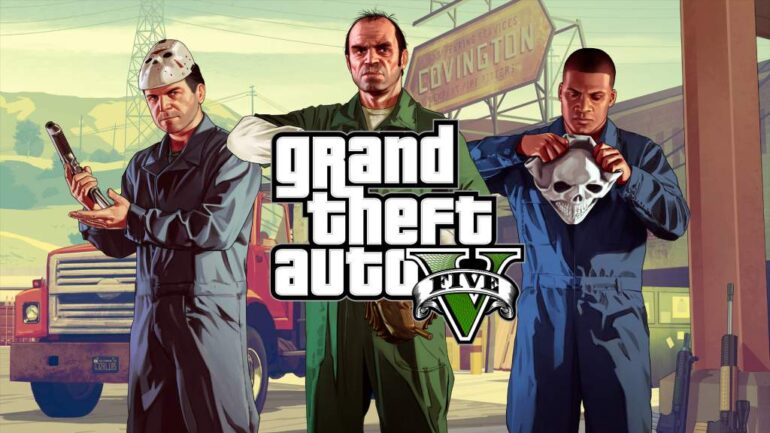 PC ports are usually called as bad ports from consoles. Why? Because there are gameplay issues, bugs, and most frustratingly massive frame drops from the lack of optimization. Developers usually port games from consoles to PC quickly because of publishers pressuring them to release the game along with the console ports for sales, or developers are only in it for the profit. Fortunately, Rockstar Games did a great job optimizing the game for PC. They took time making Grand Theft Auto V to run well on PC and even delayed the PC release a lot of times just to make the game a great PC port than its predecessor.

Grand Theft Auto V is an open-world action adventure game and is set, again, in the city of San Andreas. And no, you won’t be seeing the famous green Grove Street Family gangster member Carl Johnson, also known as CJ. The game starts with a bank heist by an infamous 3-man group, namely, Michael, Trevor, and Lester. Nine years after the heist, Michael, who was presumed to be dead, is back in Los Santos where he met the loyal Grove gangster Franklin to help him out with some errands. When word came out that Michael is still alive, the psychopath Trevor comes back to look for him; and in the end, all three of them are doing the dirty work for the FIB.

As a typical open-world action game, Grand Theft Auto V gives a lot of new experiences to players and a great variety of enjoyable missions. The world of Los Santos has improved and is bigger than ever which makes it a lot more fun doing shootouts and exploration. There are more features added as well, among them are taking pictures, and even do the popular ‘selfie’, using a cellphone, which you can also very well use in calling a cab, getting a blimp, and hang out with NPCs. And significantly, you wouldn’t miss the implementation of a first-person mode if you want to play the whole game in first-person or alternate modes in-game, which is actually quite impressive.

Continuing with the additional features, Rockstar Games also added a “Director Mode”. This mode can record your gameplay clips, edit the video, and share it to your friends in Social Club. Rockstar made it possible to have videos of memorable gameplay moments to be bragged about by the players, and they made editing a lot easier for casual players too.

To be able to switch between Trevor, Michael, and Franklin was another great add-on in Grand Theft Auto V. This feature provided more stories and missions for the players, allowing the game to have multiple linked stories that made the game far more interesting. And making the game more alluring, they also added “special skills” for each character. Michael can go in slow-motion which makes shooting easier, Franklin’s driving proficiency can be amplified to make driving and vehicles simpler to maneuver, and Trevor’s ability, once activated, can make his life and defense stronger. Players can also use stealth approach when eliminating enemies on missions, but it’s difficult to pull this off, nearly impossible to apply during the actual game itself.

Adventure wise, Grand Theft Auto V’s playground is huge. Sea exploration is also possible where you get to be eaten by sharks if you’re not too careful. You can still fly planes and choppers in the game. The city of Los Santos offers a lot of interaction where you get to play mini-games like Tennis, go to strip clubs and watch sexy women dance and you can also hire them to do a lap dance for you. There are also an array of clothes, weapons, and houses to choose from. Developers even added market lots for players to buy and specifically restricted to specific characters which makes it a bit discouraging. Aside from looking good in-game, there are also unknown missions, heists, and challenges if the players want to be busy or occupied in-game. These missions can still be played after completing the main story missions if you want to hit that 100% Completion stats.

Aside from the main story missions, there is also GTA Online. The online mode still features an open world gameplay and players can also customize their own character. Weirdly the character doesn’t speak at all. Players can play with their friends to do heists and also buy their own apartment, apparels, car designs, and a bit more.

Grand Theft Auto V’s graphics is very well extreme. The bump of next-generation graphics (sorry Watch_Dogs) is crowned to GTA V’s well detailed open-world high definition models. Comparing to the other next-generation versions of the PS4 and Xbox One, the PC version design is far better than what next-gen consoles have to show. Let’s say, the Normal Quality setting of GTA V in PC is actually the PS3 version, while the High Quality Setting is the PS4 version, and Ultra is exclusive for PC. The game runs on Rockstar’s own RAGE, the same engine that was used in Max Payne 3. If you have played Max Payne 3, you’ll have an idea what I’m talking about graphically, but improved in so many levels. The motion blur and field of depth in the game gives the HD quality that players always wanted. With PC’s ability to tweak settings, the Graphic Settings of this game offers a lot of options for configuration in order for the game to run a stable 60FPS on the player’s gaming rig.

Unfortunately, even with all the great gameplay and graphics that Grand Theft Auto V has to offer, there are still some issues with the game. Graphically, there’s a glitch with the shadow render box that follows the player. It can be 70% fixed with the AMD and Nvidia Shadow settings but it’s still an ongoing issue ever since the PS3 and Xbox 360 versions’ release. There was also a lot of performance issues with AMD videocards, which I happen to experience myself, but it was quickly fixed by the 300MB+ patch that also included some fixes for the CPU utilization issues from its initial release.

The controls of the game were not that bad at all. I never really experienced using a mouse and keyboard since I used an Xbox 360 gamepad to play the game on my PC. The buttons were conveniently mapped and it was easier to drive, switch weapons, and alternate from character to another with a slow-motion effect.

Overall Grand Theft Auto V showcases the masterpiece of an open world action adventure title that Watch_Dogs and other open world games have failed to deliver. The mind-blowing graphics, alluring gameplay experience, and the perfect online mode makes Grand Theft Auto V a deserving game to be awarded with Game of the Year title of 2015!