This is one side-scroller worth keeping an eye on 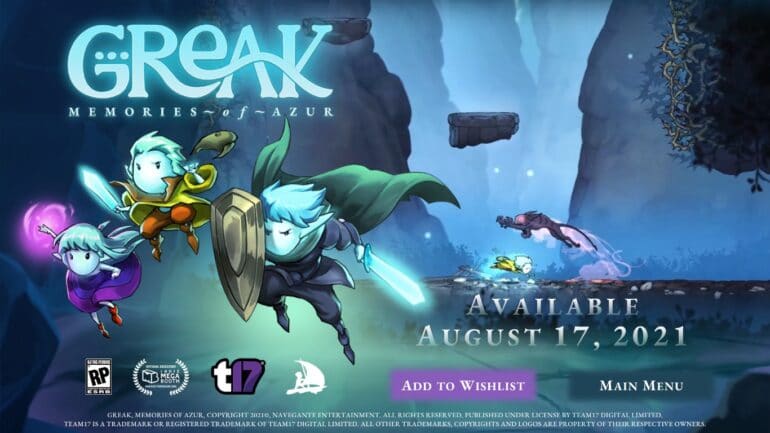 Greak: Memories of Azur didn’t opt to have the flashiest of demos. It didn’t start us of in the middle of a great conflict, nor did it start with a mystery to solve. From the short demo I’ve played so far, I can already tell that this unassuming game has something to bring to the table.

The puzzle-platformer as a genre is surprisingly hard to stand out from. Once upon a time, all you needed to do was to have great gameplay and the rest will work itself out. Don’t get me wrong, gameplay is still top priority. But it seems like to stand out at all these days, you’ll need a unique art style and a story worth telling.

I can’t speak for what the story is going to be like yet, but Greak: Memories of Azur already seems to deliver in the art and gameplay department.

(Please note that I’m playing the demo on Steam with a PS4 controller. The game recommends it, actually.)

The demo starts us off as the titular hero, Greak, as he looks over a cliff. The opening stage is all about getting used to the controls, which are very responsive. At this point, the game is makes it known that Greak is able to perform double jumps and having the ability to hold onto walls before slipping down.

Our first encounter is with some kind of mud monster. My first impressions is that the animations are a cut above other games. The attention to detail is impressive. What impressed me the most was the dodge animation. Gotta give credit to the animators for this one.

More encounters appear down the path, as we’re introduced to a couple more monster types. It takes around 4 hits to kill an enemy using Greak’s sword. Usually you’d think to stand still and strike at them until they’re dead, but here, the enemies recoil a bit before striking back. Timing that dodge window gets harder if you’re thinking of sneaking in a cheeky swipe. That didn’t work out for me.

Eventually, all my running led to the foot of a ruinous castle. And that’s where we are introduced to Greak’s sister, Adara.

When we first encounter Adara, she was looking down at Greak from the upper levels of the castle. Pressing a direction of the d-pad, we can change the character we’re controlling. Adara is a magic user who shoots projectiles in 8 directions. She is also able to levitate while in the air. Both the projectiles and the levitation draw from the same mana bar, but it doesn’t take long for the bar to refill. You won’t be completely defenseless should it empty, you just won’t be able to shoot as frequently. After the siblings reunite, they make their way through the bowels of the castle.

Moving around isn’t a problem with 2 characters. By holding L2 close to any sibling, the group will move in unison. That also translates with other moves like climbing and jumping, for as long as L2 is being held. Holding R2 will make the other move towards your location. There might be some clever puzzles tied to this, but for now, it’s a convenience.

What follows next is a series of 2 person puzzles which I don’t think require too much effort to figure out. The objective is to bring 2 gear pieces to a large door at the base of the castle. The layout’s set up in such a way that the objective are in obvious corners of the castle. At this stage, balance puzzles and 2 person door triggers are more than enough to get the idea across. The game even throws in a new enemy into the mix, the Urlag. These brutes look intimidating as heck, with their skull masks and chained blades.

The final stretch of the level sees our heroes going up against Ryssar Odekt, the Urlag Bonebreaker. I must admit, it took me more than a couple of tries to beat this boss. That was only because I kept trying to beat him to the punch. Turns out, he has a quick attack in his attack patterns. And that one attack is fast! Maybe if I read his patterns a little more, maybe I’d have fallen him in less tries. Regardless, it was still fun.

The demo ends with the defeat of the boss. And to be honest, I wanted to experience more. It wasn’t lacking or anything, I just wanted to see if I can do more. Like what would have happened if I controlled both Greak and Adara during the fight. Would’ve been a pain in the butt, considering their dodges are completely different from one another. And honestly, fighting the boss with Adara is just frustrating with her dodge. So, who knows? Something to keep in mind next time.

Greak: Memories of Azur has a lot going for it. The art style is fantastic, and there’s obviously a lot of work put into the animations. The mechanics are solid, each of them have unique movement sets good enough to have puzzles revolving around them.

There are some things that may go unnoticed, like how both characters having a ranged stance. Greak’s has a crossbow but I never got a chance to use it. Adara can also hold her breath longer underwater. It wouldn’t be hard to imagine that she’ll be the go-to in underwater puzzles.

There is a third sibling not present in the demo – Raydel. Going by the trailers, he and his shield will be essential in puzzles involving anything that needs blocking.

I don’t know about you guys, but after playing the demo, I’m actually looking forward to the game. I want to know more about the siblings’ story, especially their escape from the Urlag invasion. This is one to watch out for.

You can find more information on the game here. Greak: Memories of Azur is set come out this August 17th, 2021.