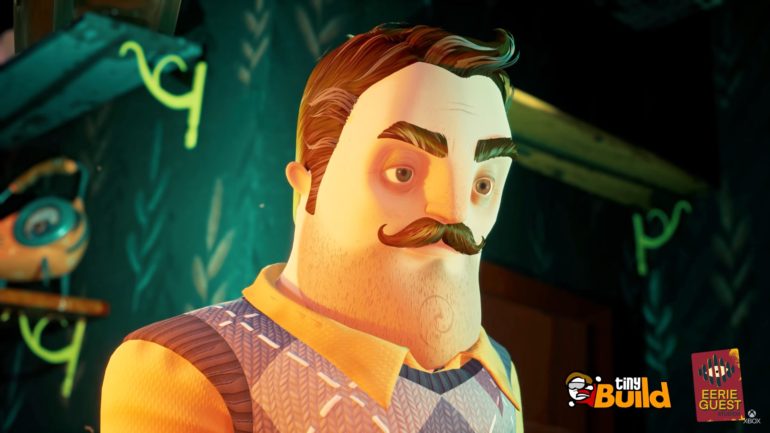 So Hello Neighbor 2 still doesn’t have an announcement date. However, the developers tinyBuild did reveal something interesting during the E3 Guerrilla Collective Showcase today, particularly a few details you might find interesting regarding the upcoming Hello Neighbor 2.

Mr. Peterson once again makes a return for the sequel. This time, you play as a journalist named Quinton, who investigates the former’s house under suspicion of malicious activities. The trailer above then goes on to explain Peterson’s ever-so evolving artificial intelligence which will be based around the community’s actions. Do people hide in the closet often? What route do they take to avoid Mr. Peterson? The trailer claims that the community’s repetition of their acts will evolve Mr. Peterson into making more complex decisions to hinder player progression.

That isn’t all though. This time around, Mr. Peterson isn’t the only AI in Raven Brooks. And players can interact with any of them. It seems that police officers and a suspicious man reading a news paper will be interactable, complete with their own stories and sharing the same core AI as the aforementioned.

While we don’t have an exact date when Hello Neighbor 2 will release, we do know that it will release sometime 2021. You can check it out on Steam and it will also be available for Xbox. If you’re interested in seeing our impressions on the game, you can be sure we’ll cover that as well!