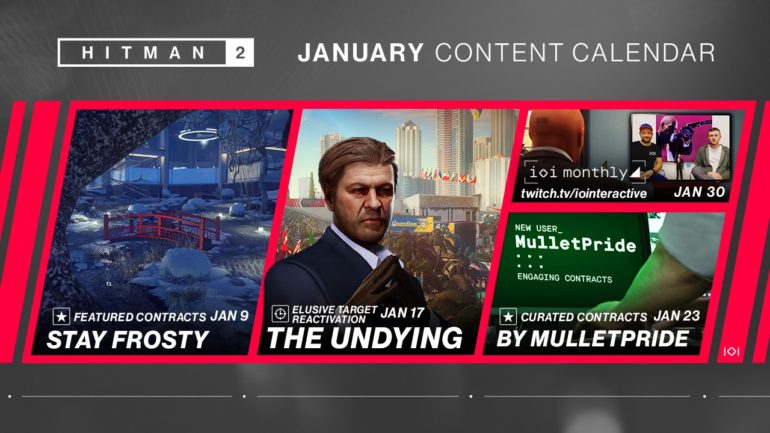 It is a new year with new upcoming content for the popular stealth action video game. IO Interactive revealed that it will be focusing more on Featured Contracts, Elusive Target Reactivations, and Curated Contracts for its live content. Its IOI Monthly livestreams will continue too with updates and insight direct from the developer team. It is not called the January Roadmap because it is intended to reflect the change sin content and to make it easier to discuss the content. The January Roadmap from 2019 already exists so it is better to have a new name.

The Featured Contracts will have 11 Contracts hand-picked by the development team from the Official Submission Thread on Hitman Forum. It is expected to be added to the game for everyone to play today, Jan.9. This month’s theme is Stay Frosty, but do not expect to stay all the time in Hokkaido. There will be different locations and targets to check out.

Players will be able to try assassinating Sean Bean playing The Undying. All Elusive Targets will be reactivated starting with the first one. Mark Faba aka The Undying will be in Miami for 10 days and available to play for anyone who missed him the first time around. For those who have already completed or failed this Elusive Target, the record will stay and the contract will remain closed.

Aside from the Featured Contracts, the developer revealed a community curator that will pick some of their favorite contracts and have them included in the game. They can post on the blog so that they can explain why they chose the contracts. The first Curator is MulletPride, a regular name in the Hitman Community.

The monthly look behind the scenes at IO Interactive will still continue in 2020. There will be more developers, more insight, and updates from the studio. The latest video to be added is the Meet the Team series and they will share the February Content Calendar. There will be new updates on Jan. 30.

HITMAN 2 is now available on PlayStation 4, Xbox One, and PC.