Hitman 3 Physical Editions to be Distributed in 60 Countries Across Europe, Middle East, Africa and Australia 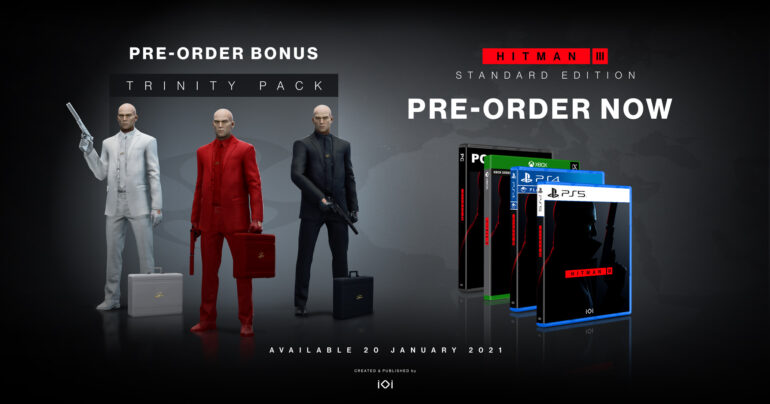 The physical copies will be distributed on the same date as the digital launch January 20, 2021.

Aside from countries across Europe, Square Enix will distribute the game in the Middle East, Africa, and Australasia. Players who want to reserve a copy can pre-order the Standard or Deluxe physical edition of the game at the official website. All players who pre-order any edition of the game can get the Trinity Pack that includes 9 in-game items like suits, briefcases, and weapons from the entire World of Assassination trilogy. Aside from the pre-order perks, getting the physical Deluxe Edition gives players access to exclusive in-game and behind the scenes content like:

This will be the first time for players to experience the World Assassination in VR with PlayStation VR support. PS VR support allows players to stand face-to-face with their targets and look them in the eyes, blend-in to a busy crowd, and even hear conversations while blending in. 20+ locations from the World of Assassination trilogy are supported in VR when playing the game.

HITMAN 3 is the dramatic conclusion to the World of Assassination trilogy and takes players around the world on a globetrotting adventure to sprawling sandbox locations. Agent 47 returns as a ruthless professional for the most important contracts of his entire career.

Supported by his Agency handler, Diana Burnwood, 47 joins forces with his long-lost friend Lucas Grey. Their ultimate mission is to eliminate the partners of Providence, but they are forced to adapt as their hunt intensifies. When the dust settles, 47 and the world he inhabits will never be the same again.

Every mission location in HITMAN 3 is meticulously detailed and packed full of creative opportunities. Players will have unrivalled freedom to complete their objectives and the game world will react to everything they do. All of this is made possible by the award-winning Glacier technology, which powers HITMAN 3’s immersive game world to offer unparalleled player choice and replayability.

Players of previous HITMAN games will be able to ‘import’ locations that they own from the previous two HITMAN games into HITMAN 3, essentially putting all 20+ locations from the entire trilogy in one place.