The adrenaline junkie's XCom is getting ready for its series premiere 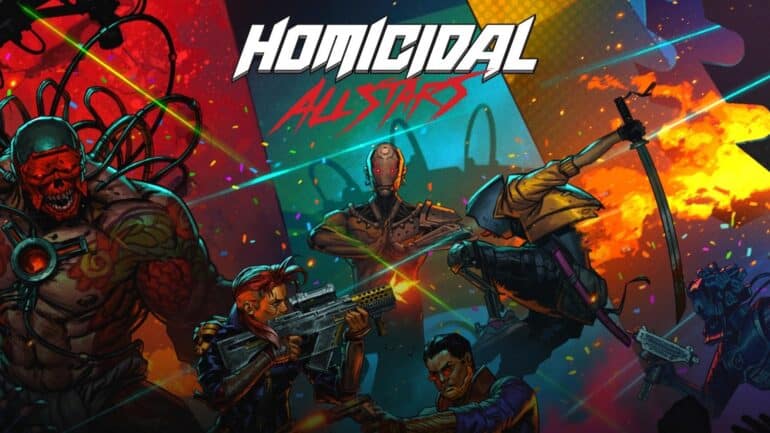 In this preview, we managed to get our hands on a build for the upcoming turn-based tactics game, Homicidal All-Stars. From what I’ve seen so far, the game is equal parts turn-based tactics, puzzle-solver, and role-playing. I was impressed with how seamlessly all three aspects came together in a way that felt fresh while further addressing some issues that come with being an XCom-inspired game. And after playing 10 or so hours of the preview build, I was totally blown away.

Homicidal All-Stars, as the title suggests, is a game show of death where contestants take part in a series of trials of escalating lethality. Within each themed location, challengers have to reach the end and face the final challenge all the while narrowly avoiding traps and fighting through the occasional ambush.

Explorable areas are sectioned off into one critical path abd a number of smaller challenge rooms with a loot box at the end of them. I actually really like how they incentivize you when it comes to loot boxes. You can easily ignore them and go straight to the next combat encounter but doing robs you of the chance of getting powerful weapons. Well, 7 times out of 10. They’re called loot boxes for a reason. Though it’s not like I’ll ever turn down a free medkit.

The road to stardom is a long and winding one. The surest way to get there requires doing the little things like taking part in death-defying puzzles and interacting with the fans. This gets the attention of the corporate sponsors and in turn, allows you to accept a one-time gift from the sponsor of your choice.

The story revolves around protagonist Scarlett as she tries to survive and win the life or death game show, Homicidal All Stars. For reasons I won’t disclose here, Scarlett entered the games with one objective in mind. She is determined to make it to the finals and defeat the champion in combat. But she knows she can’t do it alone.

During my time in with preview build, she meets and befriends former champion, Marty, Tybalt the tech and infiltration specialist, and lastly Zoe Reed aka the raider lady from Fallout 3 who got lost and ended up being a CEO testing her own weapon designs at the nearest death show. There’s also a 10-meter-tall war machine called The Warden but I can’t trust anyone who can potentially point their gun at me on command.

Interesting as Zoe is, I gotta give some love to my two favorite characters so far – Scarlett and Tybalt. Scarlett is the elite assault trooper I would love to have had during an Ironman run of XCom. Tybalt’s cloaking tech and strategies make every encounter fun. It’s hard not to rely on his kit when enemies fall for it all the time. Plus, he’s got ways to counter some of the game’s more annoying enemy types.

When it comes to enemy variety, Homicidal All Stars has got that in spades. New unique enemies are introduced and added to the combat pool at the end of each episode. They are a much-appreciated addition to the otherwise dull mix of Ninja wannabe cyborgs and your garden-variety psychopath. Every one of the specialists is deadly in their right.

The game appears to have much to teach in terms of moving the genre forward. And none are more significant than having removed the randomness of melee attacks. But that wasn’t enough. The developers even added some wiggle room when it comes to getting up close and personal. If you have 1 AP left, and the enemy is not too far away, you can spend that 1 AP to get close and initiate a melee attack. These few examples alone remove much of the frustration that comes with tactics games. More games should implement these into their systems.

The thing that’s gotten me hooked to wanting to play more is the game’s story. Or rather, the idea of the story unfolds should a major twist were to happen. After every match, Scarlett gets nightmares about what happened in the past. We find out that she’s playing a very dangerous game of deception. I’m left wondering what’s going to happen if the truth got out too early.

The majority of the cutscenes are presented through a series of still images that look as if they have been lifted off the pages of a graphic novel. The cell-shaded art sells the gritty and dark elements of the plot.

For a preview build, this version of Homicidal All Stars could have fooled me as a complete product. I could have sworn that this was release ready if not for the abrupt end after the 5th level. With that being said, there are a few things the developers can work on. There are missing animations for when an enemy gets hit while Overwatch is active. It’s kinda awkward watching them slide around to their destination tile. They can also reduce the likelihood of enemies going into Overwatch to the back of the map. I’m sure the crowd hates passive participation.

And that’s it. If that’s all the complaints I have for a pre-release game, then they’re certainly doing something right.

Homicidal All Stars has gotten me star-struck. It has some of the best tactics gameplay I’ve played in a long time, and that’s on top of its impressive visuals. Add in the likable cast of characters and rewarding puzzle and exploration mechanics, and you’ve got something worth keeping an eye on. We don’t have an exact date of release yet but I’m looking forward to the day it releases and settling an old score once and for all.