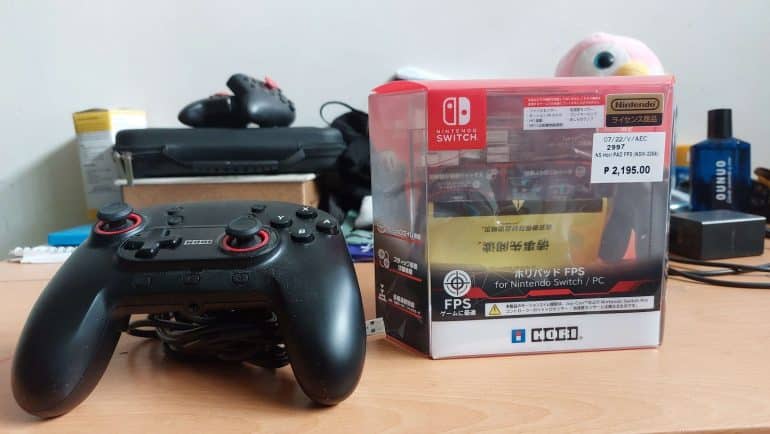 What we have here today is probably one of the best controllers I’ve used in a long while: The HORI FPS Switch controller. It handles much like the PS4 FPS does albeit with a few minute differences which we’ll get into detail in a bit.

This is a controller you can really rely on especially when under long hours of play, be it in a grind-heavy game like PSO2NGS or Genshin Impact, or other games like Getsu Fuma Den: Undying Moon, Infernax, The House of the Dead REMAKE, or even Katana ZERO and R-Type FINAL 2 if you’re playing on the PC or the Switch, thanks to its USB plug and driver.

Released last September 16, 2021, the HORI FPS Switch is an enhanced version of the Switch’s own HORIPAD released by the same company with fine-tuning focused on the right analog stick as well as further-increased control options such as its motion control capabilities which follow the controller’s movement and moves as finely as the player can manage. This gives control of even the most minute movements.

And by now having 2 control buttons instead of one and a sensitivity dial acting as a brake or accelerator for in-game control of the camera should the game demand such use like in frantic firefights or closely following a target and needing a much more precise aim especially when targeting the weak point on a large enemy.

The grip houses said buttons, which is easy on the hands, allowing the user to control the speed of the camera, slowing down or speeding up the aim, especially for first-person shooters like Gundam Evolution or Left 4 Dead or over-the-shoulder shooters like Dead Space or Vanquish, with all titles showing various levels of intensity on the firefights.

It has the standard layout with the Analog Stick and the D-Pads swapped places, but thankfully the D-Pad is kept rather than the button-types and without the removable plate which makes it feel clickey like the other HORI ProCon which reveals the button-types underneath. The D-Pad is solid and has a smooth and responsive feel to it which makes it somewhat suitable for fighting games as well despite not having the same layout as HORI’s other outstanding controller line, the Fighting Commander.

Its face buttons are laid out with the default Nintendo layout with X at the top, Y on the left, B at the Bottom, and A on the right, and each button are responsive and well-suited for fast presses which could means life and death, especially on the quick-time events in games which have them, like Resident Evil 5. The response speed is great for doing small hops which might need something faster, like a low-jump air attack.

The shoulder buttons are placed in order and are just as responsive as the face buttons. They can handle light to heavy presses if needed and it’s not tiring to the fingers as the ZL/ZR buttons have this slight upward slope, in the end, to keep fingers from slipping, providing the 2nd part of the great grip, keeping the controller in your hands and not letting it slip in the middle of playing and possibly ruining a good match and turn the tides against you mid-play.

The turbo press function is still available and is activated by pressing the Turbo Button and the desired button you want it applied to, with two modes allowing automatic usage either by pressing it or hands-free, activated by inputting it a second time or deactivating it by the third input should you so wish to. It’s a great add-on that still stands the test of time, proving that sometimes, old functions should still stay that way.

There’s a program that you can download from HORI that allows you to fine-tune it, from the stick to motion sensitivity, which should prove useful should you be into that level of customization. Stick Sensitivity, Dead Zone, and even Calibration Checks are present in that program which should serve the most meticulous of players well.

A bit of a warning, though: The Screenshot button doesn’t work if you’re using it on PC unlike the standard HORIPAD considering Steam reads it as an Xbox controller but it can be easily looked over as it could just be rarely used.

The Home button brings up the Xbox Home in-game if used on the PC, which helps if you’re logged in there on Windows, allowing you to see the overlay which checks your computer and other chat windows.

Another warning is that some develop a hanging input at times if you go at it too hard, also known as controller drift. It’s not as bad as it sounds as a corrective input resets the affected stick back to normal position and be used safely, though at times can be quite inconvenient or otherwise depending on the situation in which case opening and cleaning it is quite recommended to remove dust that causes the issue to start.

Priced at a hefty $49.99 on the HORI Site, it’s more than worth it. As a few other HORI controller users have sworn by the brand, it lives up to expectations and then more as the extra functions give extra mileage to it.

Summing everything up, the HORI FPS Switch controller is a great controller which can serve both Switch and PC players alike really well and is a great if not worthy addition to one’s collection. A great investment for a long-running controller that can last years of gaming before showing signs of wear and tear, though at times it can be a hit or miss depending on how hard you go at it and how frantic your playstyle can get.