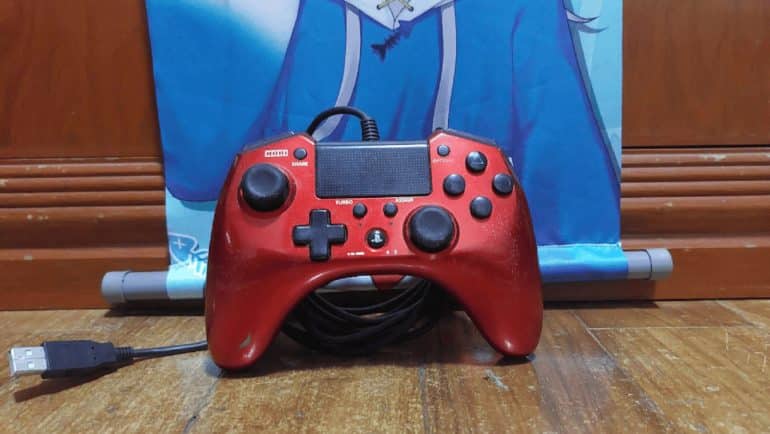 We’ve reviewed its Switch cousin, and now we’ve gotten to the PS4 variation, the Horipad FPS Plus. It’s the one I used well before picking up the Switch version, the beast of a controller that saw me through multiple games and other ones after my standard PS4 controller went all kaput with its controllers going unusable and its battery all dead. We’ll get into the details of all its features one by one, and let’s dive into them.

The first feature we’ll dive into is its complete difference from its predecessor, the Horipad FPS 3. It’s not shaped like the prototype PlayStation 3 controller that looks like a boomerang, with its more rounded form providing a better grip against its predecessor’s sharper form which sometimes strains the base of the thumb when things get too frenetic, such as Hard Mode runs in Left 4 Dead 2 or the old DOOM games when run using ZDOOM which support controller inputs and a wider range of movement.

Next up, the feature we’re gonna delve into is the switches at the bottom of the controller’s middle, with the left one handling the sensitivity of the camera’s control on the right stick, which the trigger at the bottom activates. Leftmost on the setting slows it down to a near crawl, which allows users to focus on their targets longer, with the supposed “brake” loosening the more the switch is moved towards the opposite direction.

The second switch acts as a Mode 1 and Mode 2 type of switch, allowing you to switch between PS3 and PS4 mode, considering it can be used on a total of 3 platforms, the PS3, PS4, and the PC where I used it the most after replacing the HoriPad Pro Switch. Speaking of, that might be the topic of the next entry.

Third, the shoulder buttons. It’s a really slight slope upwards that is easy to press and maintains the feel of older PlayStation controllers than the console it’s made for, giving it a bit of a nostalgic hand-feel to players using one, albeit the buttons have a hard edge rather than rounded ones.

The next feature we’ll discuss is the staple Turbo and Assign buttons. Their use is still the same setup, allowing players to hasten button presses and assign a button duplicate which can be used for alternate rapid-pressing if that’s the user’s thing, considering some games are a bit harder to play if you use the former too often than the latter after all.

Currently, this version comes in three colors (Black, Blue, and White) like other Hori Controllers, having a sheen usually seen on motorbikes but can be easily scratched at times, with mine having a bit of a scratch on the grip from a long period of heavy use and wear. Its durability leaves none to desire, as it has survived some falls and works as if nothing happened to it, resuming its duty like it did not just fall off a computer table onto the hard ground.

Summing everything up, the HoriPad FPS Plus is a great controller that’s an all-rounder for general use purposes, from First-Person-Shooters or Beat-‘Em-Ups to Driving and Horror. It’s a good addition to your gaming arsenal. With a price bracket of PHP 1,595 to PHP 2,195 depending on the store, this one will be pretty much a one-time purchase that will last you years up to a whole decade or beyond that, if taken care of really well, like a gift that keeps on giving.

HoriPad FPS Plus Controller
Score Definition
The HoriPad FPS Plus is a great controller that's an all-rounder for general use, from First-Person-Shooters or Beat-'Em-Ups to Driving and Horror.
Pros
Cons
4