Check out the several accessibility features of the game! 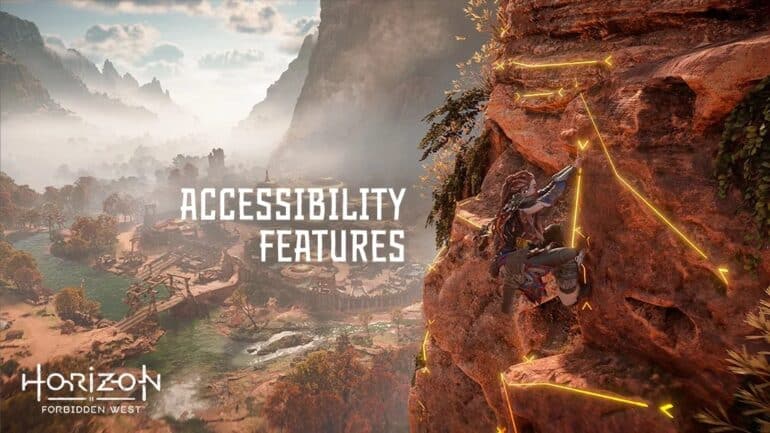 It is just a few days before the launch of upcoming sequel Horizon Forbidden West and Guerilla Games has been releasing new details about the game. This time around, its accessibility features that players can customize. Some of these come from the previous game, Horizon Zero Dawn, but there are new ones that got added for this title.

There are a couple of General Accessibility Settings that get enabled automatically when starting the game and one of those is the subtitles. They can change the size and background used with subtitles to make it easier to read. There is also the option on which language to choose in both spoken and subtitles.

The game menu has the Notebook, which is an expansive encyclopedia that contains a lot of information like the characters, machines, and datapoints found in the world. There is also a separate Tutorials section to learn game mechanics or controls.

There are five difficulty settings to choose from in this game from Story Mode which eases compbat experience to focus more on story and exploration, to Very Hard which offers challenging combat. There is also the Custom Difficulty Settings, which allows players to adjust damage levels that Aloy receives and deals to and from enemies. The Easy Loot system has been introduced and by turning that on, any resource components still attached when killing a machine will be added to the loot inventory right away.

The game has a few presets for controls including for left-handed support. Players can also remap gameplay controls with guidance on any potential conflicts. The co-pilot system allows a second controller with mirrored controls access to the game. This only needs a second controller and a second user profile.

There are optional motion sensor controls. With the DualSense wireless controllers, it is possible to make intuitive micro-adjustments to aimed shots.

There are sliders for the sensitivity of movement as well as Dead Zone settings for analog sticks. The Quick Swap allows easy changing of weapons with one tap and swap functionality of the left and right sticks.

The PS5 version offers settings specific for the platform like changing vibration intensity on cinematics, traversal, combat, UI, or the environment and more.

Players can increase how the game slows down when using the Weapon Wheel or enable Aim Assist. They can also increase Concentration, which slows down time when aiming a bow or set auto Concentration to save time from having to active it on their own.

Auto Sprint, Auto Heal, and Auto Shieldwing can be toggled to make it more convenient for players. Climbing Annotations Always One allows players to climb easier without using focus instead. Some of the Auto settings are only available in Story or Easy and Custom difficulty modes.

There are some pop-up reminders on how to use abilities, weapons, or engage with certain enemies. They can be toggled on or off if they want. If players boot up the game after shutting it down on console, they can see a Story So Far screen to remind players what to do. PS5 can toggle between Informative and Immediate loading screens for faster or slower loading screens.

Players can finetune the camera shake and motion blur easily. The game’s HUD can be customized completely.

Choose the size of the subtitles in-game and toggle where they can be displayed on background or not. For audio, there are tons of customizations like individual volume controls for music, speech, and sound effects. Opt for Mono Audio to remove Tinnitus sounds.

These are just some of the features that have been included for the day one of Horizon Forbidden West. More features will be added once they get feedback from the game community.

Horizon Forbidden West launches February 18, 2022. It will be released on PS4 and PS5.