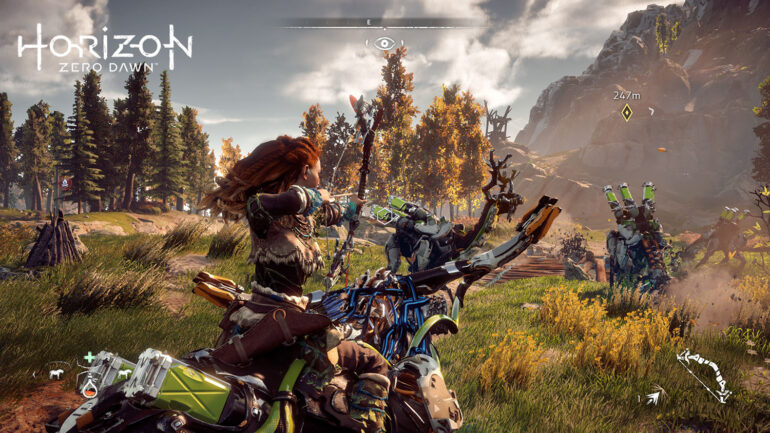 Creativity comes from people with imaginative minds, and that’s where Guerrilla Games succeeded. They have been developing games under one specific genre, and that was with their first-person shooter (FPS) titles — Killzone. Earlier today, I flew over to Manila for the preview event of Horizon: Zero Dawn, Guerrilla Games’ new IP, which was held in Shangri La Makati. I still have work at 10 in the evening today, and I just went somewhere very far just to attend this event. And you know what? It was all worth it!

Tiring as it may seem, attending a preview event that would exceed your expectations can be overwhelming. But I was filled with joy. I appreciate Sony Interactive Entertainment and Guerrilla Games for inviting me over to such a wonderful event. This is a day I won’t forget in my life. 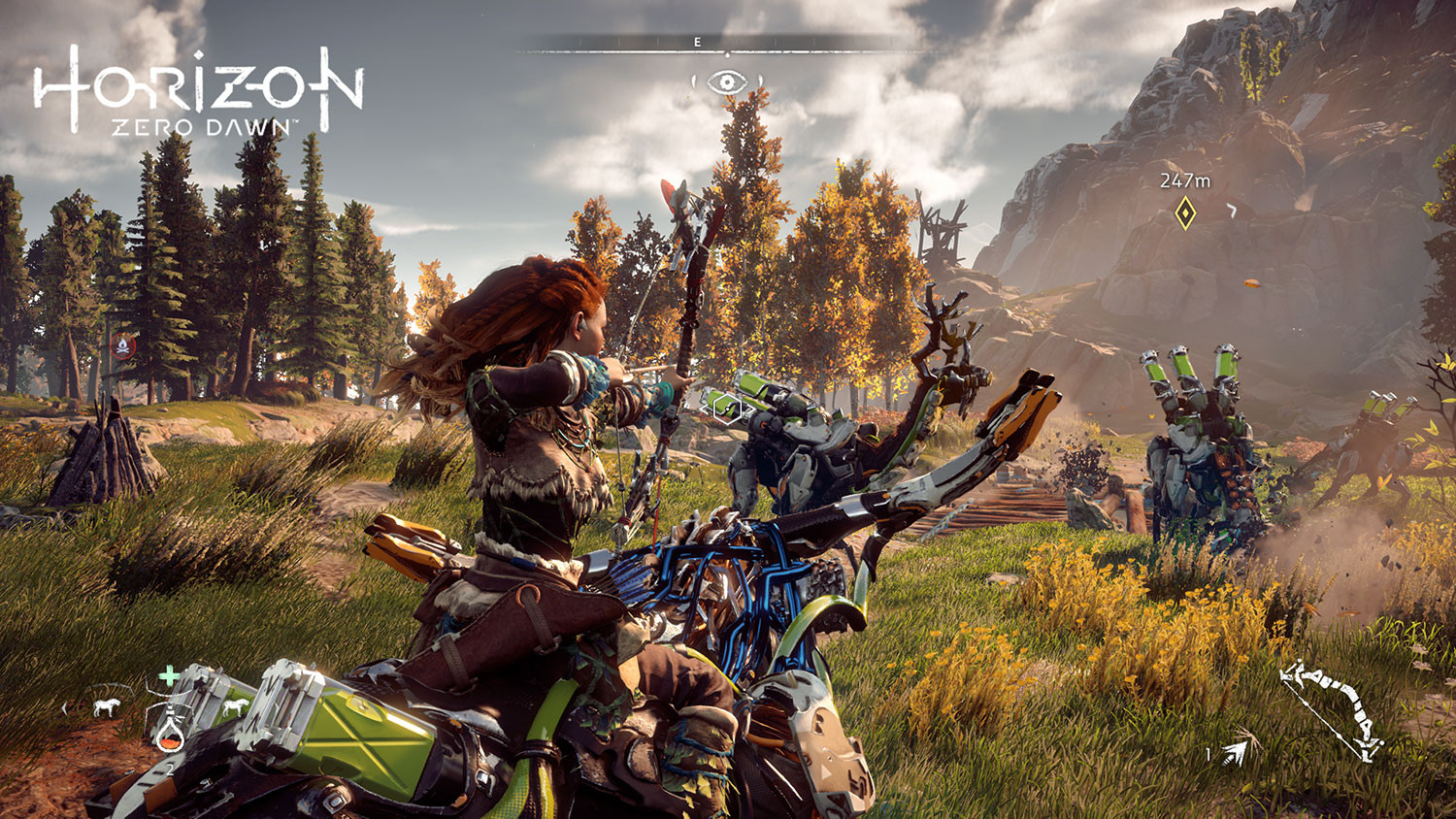 Platform: PS4 (base, Previewed)
This preview is based on the first three chapters of the game’s full version.

Even if I wanted to talk about the story, we are not allowed according to Sony in order to keep everything spoiler-free and exciting. I will save this up for my full review of Horizon, so let’s put the story aside and let’s talk about what Horizon has to offer.

Horizon is an open-world action RPG with elements borrowed from a lot of titles like Dragon Age for its dialogue selection style, and the cinematic experience like Uncharted 4: A Thief’s End. You take on the adventures of Aloy, an outcast who is in search for answers about the past and where she came from.

What makes Horizon unique is its story, world, and mechanical beasts. These creatures are far beyond from what you can imagine. They live and walk like real animals in their habitat. They hunt, react, and even be scared when they feel your presence. Like for example, the Watchers, this type of mech creature is bipedal with the ability to attack you when threatened, and there are Striders which are still mech beasts but harmless unlike the Watchers. 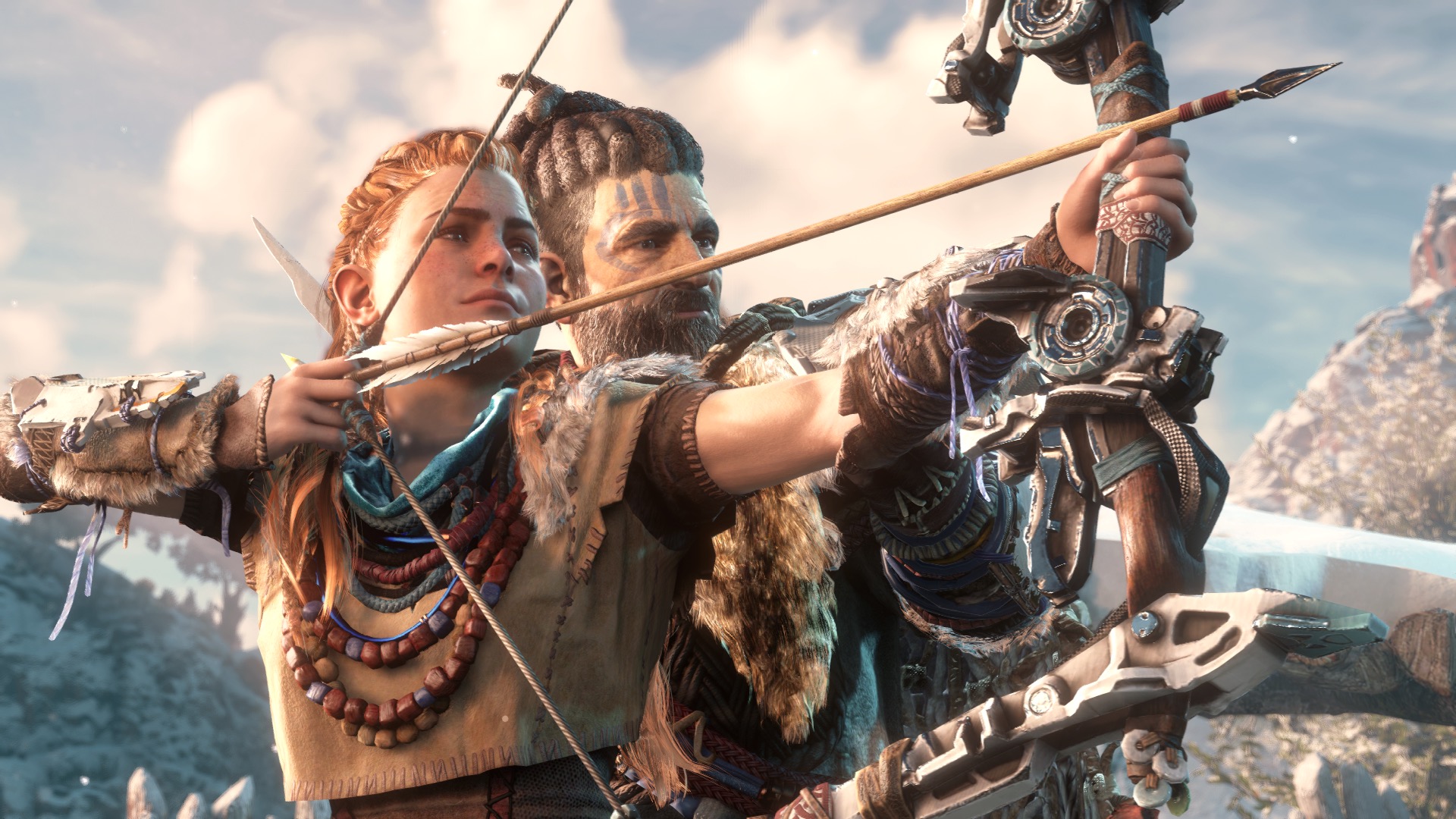 When vicious mech creatures attack you, there is a bow and arrow at your disposal to eliminate them. You also have the Tripcaster which is basically a trap where you can lure enemies to its rope, and when they trip the ropes then boom! There it goes! Aside from the bow and Tripcaster, Aloy wields one powerful spear. It’s enjoyable when you go stealth and silently kill mech creatures.

Now, the arrows and traps still need to be crafted, and without the basic materials you won’t be able to use your weapons. This is where the game makes everything a bit challenging. Horizon encourages you to loot materials as much as you can. I’m not sure yet if there’s a limit to each item in your inventory, or even a limit on your whole inventory.

The crafting system is easy to understand and I like the simplicity of it. The materials you need are scattered around the entire map and from the mech creatures. These materials are not abundant in one area, but sufficient enough for you to explore for more. You also don’t have to go through intensive blacksmith training to build weapons like some other titles.

There is also a skill tree with 3 categories namely: Prowler, Brave, and Forager. Each has its own advantages. The Prowler is the category where Aloy can improve your stealth abilities, while Brave focuses more on Aloy’s attack feats and can also upgrade slow-motion while aiming; and lastly, the Forager is the skill tree that can improve Aloy’s regeneration and also her other feats with traps and other items. Upgrading feats are things you don’t want to miss out since it helps a lot, and it’s also pretty straightforward. 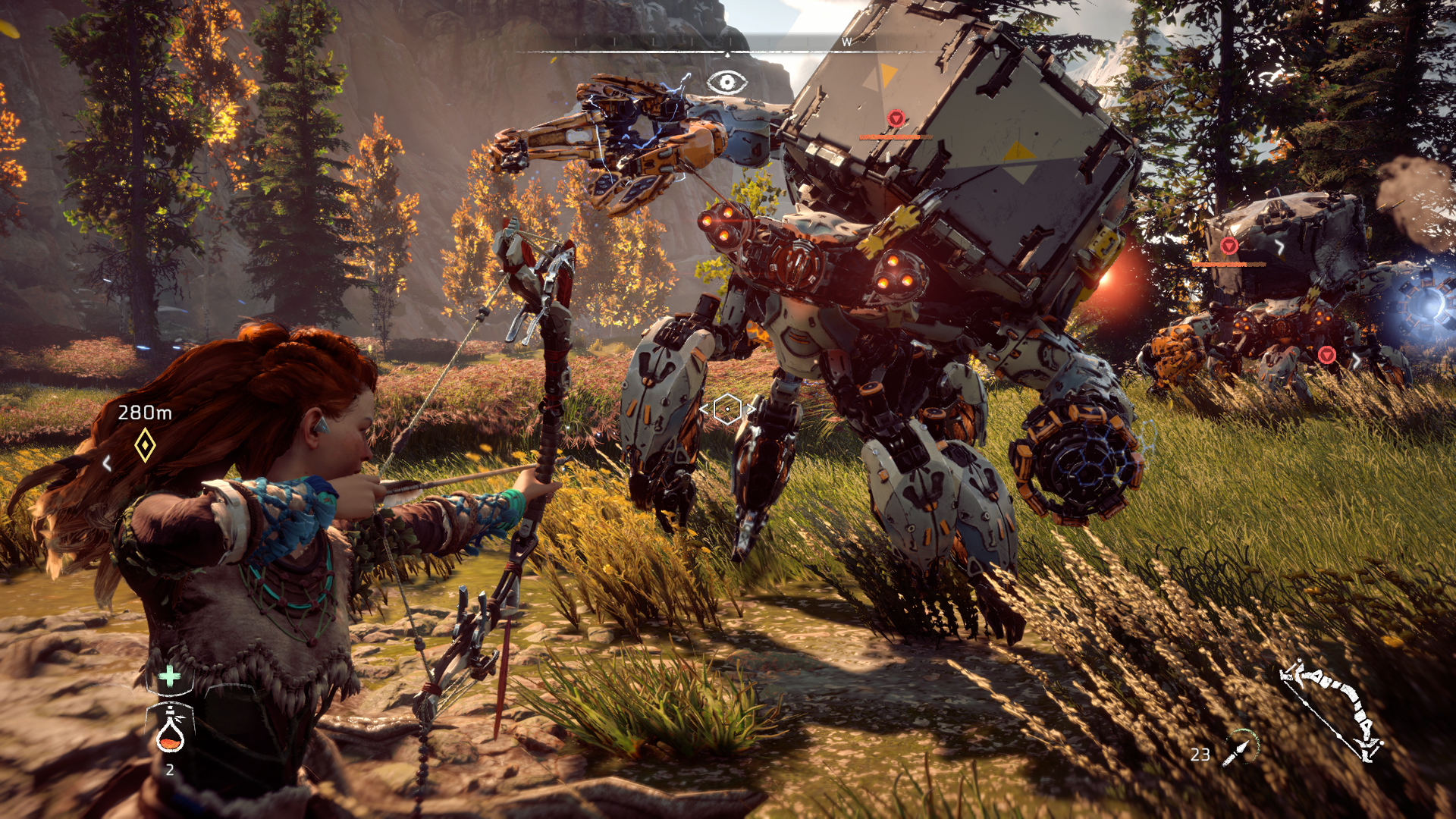 Guerrilla Games has been known to develop beautiful and stunning looking games. They took Horizon in a whole new level visually! Their game engine is definitely spot on. The facial expressions in-game show a lot of emotions that make every character in Horizon come to life. I have never seen a game with this great level of detail.

The world in Horizon brings a lot of atmosphere with its post-apocalyptic setting. You get to see mechanical beasts, humans, and biological animals rule the vastness of the land. I’ve seen and experienced parts of the game’s environment in the wilderness since we were only allowed to play the game until chapter three. Even if that was the case, I still managed to witness how fascinating Horizon can be visually.

The movement of the grasses, trees, hair, and even the creatures and characters’ animation are as organic as it can be. I’m excited to see the new places in store for us. I now consider Horizon to be the best looking PS4 game to date next to Uncharted 4. 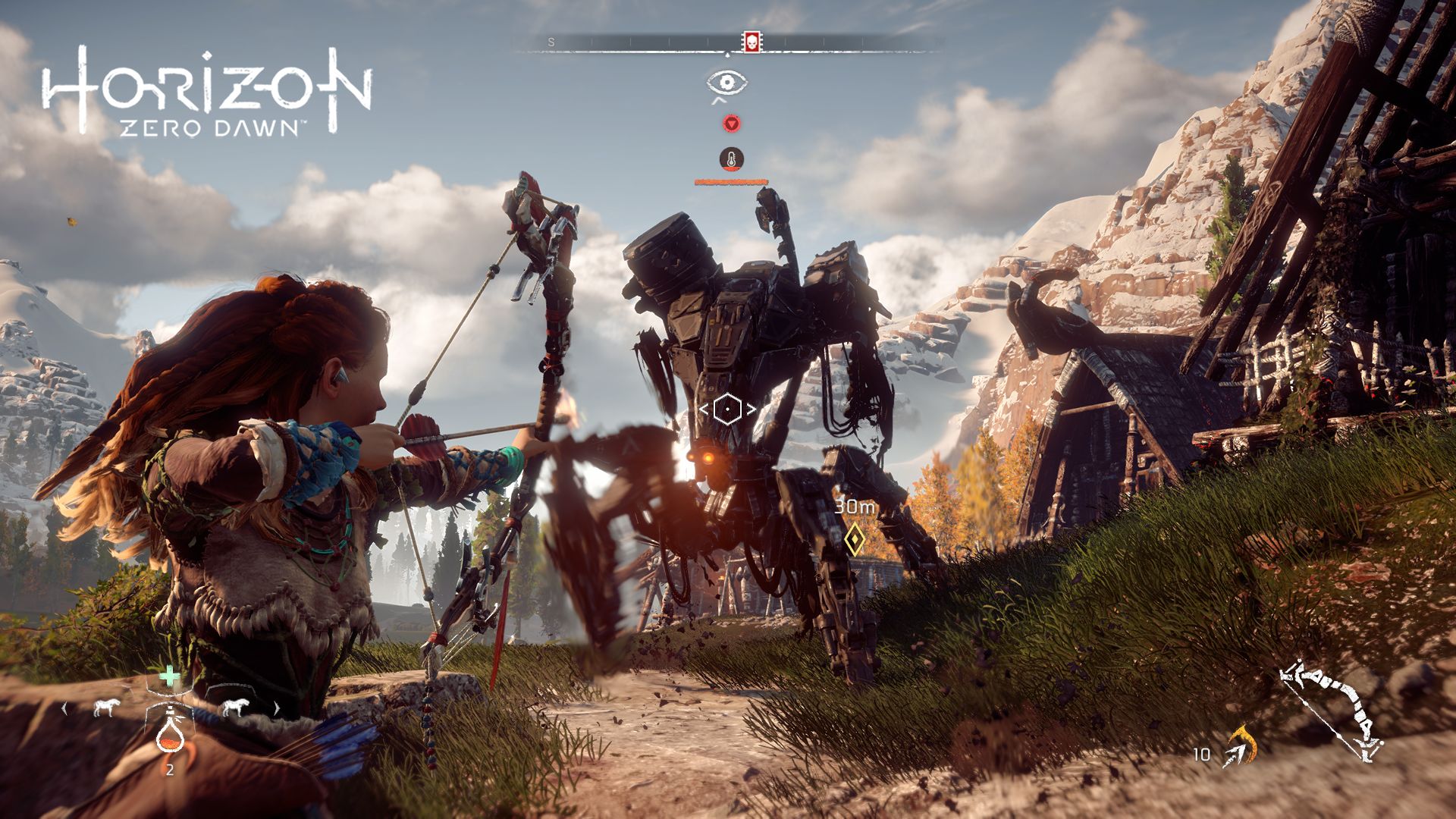 The controls are smooth, the movement is fluid, and the absence of the aim assist is certainly challenging and entertaining. But there’s this thing with its camera though, it’s not the movement, but the placement. There were sequences in the game where Aloy is placed on the right of the camera but slowly brings her back to the left side, and it’s kinda bit weird to be honest.

Horizon looks graphically demanding, and I have to say, the performance of the game on the base PS4 is really impressive. It runs smoothly and I rarely get any frame drops from the game aside from its cutscenes which doesn’t really affect the overall experience. Even in combat and heavy sequences, Horizon manages to stay stable.

As I said in my article about how Horizon: Zero Dawn will be a huge success when it launches, I already experienced the first 2 chapters of the game, and I tell you: it’s totally amazing! The hype is real, and that Guerrilla managed to bring out a great new IP that proves they can do other genres aside from first-person-shooters. I can’t wait to get my hands on Horizon and discover the secrets buried in its world.