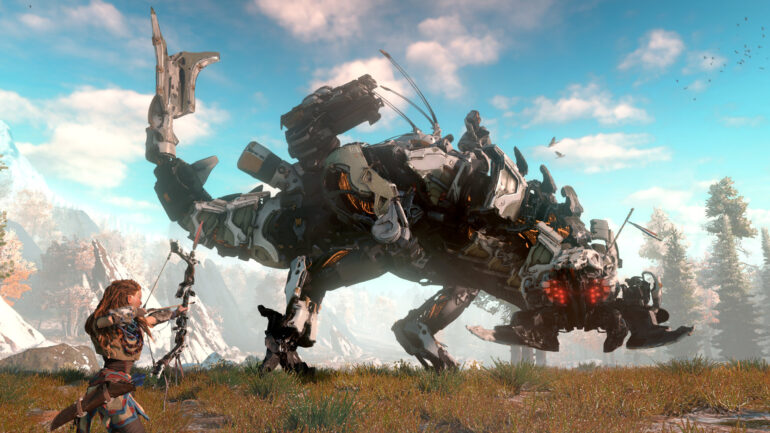 The embargo has been lifted for Sony’s exclusive, Horizon: Zero Dawn. Guerrilla Games’ new IP is getting a lot of praise from critics for its visuals, gameplay, and open-world RPG elements. My review is still currently in the works since I’m taking my time to discover the game’s secrets while slowly progressing. It’s a great game and I definitely like to get most of what Horizon has to offer.

Let’s see what the critics have to say about Horizon: Zero Dawn:

GameSpot – 9.0/10
“Horizon: Zero Dawn is an exciting and breathtaking odyssey.”

Giant Bomb – 100/100
“All in all, it’s a great game, it’s Guerrilla’s strongest release to date, and I suspect I’ll go back in after the fact to clean up whatever side quests and errands I have remaining, if only to spend a little more time in that world.”

GameRevolution – 4.5/5.0
“To simply put it, there is a certain appeal to Horizon: Zero Dawn which I have not found in any other open-world RPG game. Perhaps it is the addition of shiny robots to the mix or the story of Aloy herself. Either way, this game has my full attention and I wouldn’t call it anything less than stellar.”

Destructoid – 7.5/10
“Horizon Zero Dawn is a fascinating premise wrapped in a tortilla of tropes. It has detective vision, radio towers, skill trees, masked load screens (Tony Hawk’s American Wasteland gets no credit for popularizing this in 2005, by the way), and a world map littered with billions of points of interest — all stuff you’ve seen before. But after you set up and execute a cunning plan to decimate a pack of giant robot crocodiles and that smile hits your face, it’s more excusable.”

GamesRadar+ – 4.5/5.0
“An open-world that tailors to each and every interest, Horizon: Zero Dawn keeps combat fresh, with an intriguing protagonist to match.”