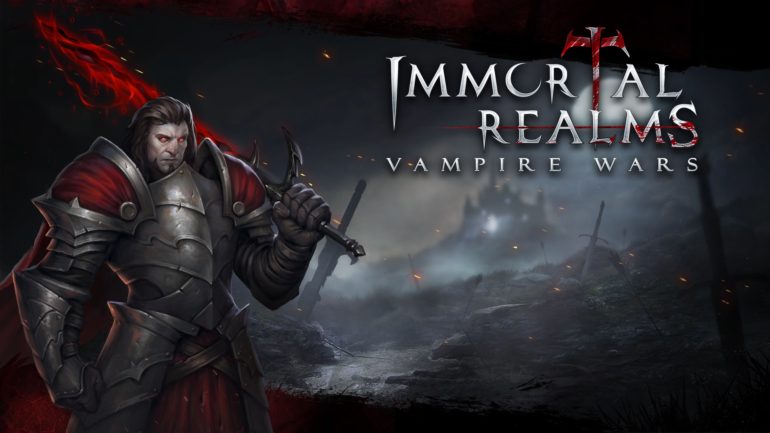 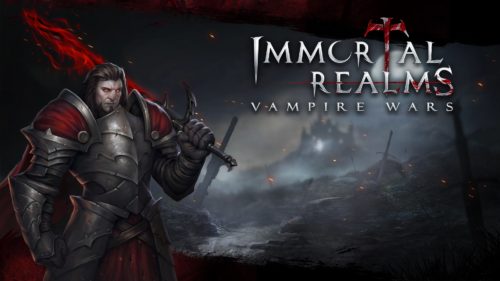 More often than not, vampires in modern fiction are quite romanticized. The lore of bloodsucking creatures of the night, once home to truly fearsome creatures of dark origins, have become fetishized by the young who find the prospect of maintaining their eternal youth to be enticing. And it’s hard to blame them. Who wouldn’t want to be young forever with mysterious powers that give you a dark allure? But let’s not forget that the vampires of distant past were violent and psychopathic creatures that only ever saw human life as cattle.

Immortal Realms: Vampire Wars gives you a dark world where vampires who don’t hide behind the facade of being human rule with an iron fist. In here, you conquer human settlements, enslave mortals to your bidding, and sacrifice them to further your cause. This is a game where you have to truly be a cruel bloodsucking beast in order to achieve victory.

Immortal Realms: Vampire Wars is a turned based strategy game with its gameplay separated into two different parts. You’ll have your phase where you manage your army, conquer territory, and make investments towards progress. It’s in this phase where you’ll have a lay of the map, though many parts of it are shrouded in fog until you advance to uncharted territories. As you progress, you’ll conquer more territories to expand your resources and make your army stronger.

Then you have your combat phase. You enter this phase when your army clashes with an enemy platoon either heading into your territory or defending their own. You’ll be transported into a random small map to start your skirmish. It’s in here where you have to carefully place your troops into positions to outmaneuver, outflank, and outwit your enemies.

To talk about my experiences on the PlayStation 4, Immortal Realms: Vampire Wars does an adequate enough job on the joystick to allow enough control for the player to do what they need to. Although at many times, it can be frustrating as selecting the wrong menu on the user interface can be a common occurrence.

Speaking of User Interface, you’ll notice that there’s a lot on the screen. And it can be intimidating to get comfortable with. You have your cards on the bottom right, minimap on the top right, blood currency on the very top, and many more details that could be straining on the eyes if you think about it too much.

However, as you progress, you’ll slowly become more comfortable with it. Albeit, there’s a difficulty in selecting what exactly it is you want to manage on the joystick that I imagine keyboard and mouse users rarely would have a problem with. Which why I think it’s a huge missed opportunity to not make this keyboard and mouse compatible for the PS4 as it would give an option to make gameplay easier to handle.

You’ll also notice drops in frame rate despite the game’s rather modest graphics. The game runs decent enough on the PlayStation 4 but this was a frequent enough occurrence on my end to make this an annoyance, not enough to make me intolerant, but definitely annoyed.

If you’re intimidated by the gameplay after watching the videos of this online, don’t be. Immortal Realms: Vampire Wars has a tutorial option in the menu which does a good job of easing you into the mechanics of the game. Though even after tutorial, you’ll most likely still be learning by trial and error as the real game plays differently than the kiddie gloves they treat you with in the tutorial.

You have an option of playing the main campaign missions which definitely helps ease you into the gameplay by slowly making things more difficult as you progress. Then you have Sandbox which allows you to customize your own war zone which can be challenging even in default settings. If you want to forgo the strategy of conquering and improving your army, then you can head straight into skirmish. This mode allows you to simulate a battlefield immediately with a good customization on what faction you’re playing as and against, what lords are on the battlefield, what units, and even the items equipped.

You may notice that I’ve mentioned factions. There’s three vampire clans in this game you can choose from. You have your Dracul, which is the most physically imposing with military might to conquer lands. You have your Nosfernus which can raise the dead to plague battlefields. Then you have the Moroia, a clan that specialize in terrifying blood magic that rules the battlefield through cunning tactics.

Each of these clans are dreadful in their own right. With two of them based after real life figures who are the frequent basis for vampires. The clans you choose to play as have their own unique benefits, lore, and playstyle that keep battlefields fresh. There is a rich amount of options for improvement and customization that can accommodate different strategies.

There’s a surprisingly great level of enjoyment from the micromanagement I had to do when commanding armies. The game manages to be enjoyable to those who are willing to invest time to learn what it has to offer. Although there is no multiplayer for Immortal Realms: Vampire Wars, the AI does a decent enough challenge to keep players on their toes.

That’s not to say I don’t have gripes with the game. There are a few questionable decisions with gameplay that I can’t say I fancy too much. Such as the need to have your army stationed on a certain area in order to recruit more to their ranks. The only time you can recruit troops to your army without them being present is to have a card which you can play on specific buildings.

Speaking of cards, having specific ones can make all the difference depending on your situation. They can take some blood currency to use which you gain by conquering human settlements. Now this might terrify you, but you can use these cards to slaughter villages for blood currency, drag people out of their homes to turn into useful soldiers, and sacrifice innocents to further your cause.

What I like about these cards is that while they provide certain advantages, many of them can also require sacrifice to use which can take some level of decision making than just using them without consequences. For example one card allows you to slaughter all the villagers for blood currency, but your source of passive income are from the human villagers whose blood you take so killing them all might get you a lot of blood currency at the moment but would be disastrous in the long run as your vampire army does require more blood for upkeep. Unless you’re playing the Nosfernus clan, whose armies require no upkeep.

These cards aren’t really stale or set in stone either. You’ll get new ones as you progress through conquering libraries or waiting for the yearly cycle to end. The two types of cards you’ll get are one during conquering phase which cost blood points to use and will be discarded. And one during combat phase, exclusively attached to the lord commanding that platoon which use mana, can be upgraded, and don’t discard upon use.

This game does ultimately require a level of discretion. Each of these decisions can be costly should you make a mistake. Do you sacrifice a significant amount of health to increase damage? Are you going to risk placing your archers behind the spearmen, potentially blocking their escape route? Let an enemy take some of your territory or risk going up against a stronger platoon? Which perks should you invest in? What cards should you take?

Keep in mind this is a game based upon numbers, not just cards. Each vampire brigade in your army has a number above their heads, the higher this number the stronger they are. The more they take damage, the more this number goes down and they become weaker. Which makes sense, since an injured soldier wouldn’t be able to perform at their peak. The same thing also applies for your enemies.

Before an engagement with another army commences, you’ll be given a brief description of what you’ll be going up against. The total might of your army listed in numbers is displayed against theirs. The higher the enemy’s numbers are the more difficult the fight. This gives you a chance to survey a fight and decide if it’s worth taking a risk or retreating. Though you won’t be able to make this choice, if it’s the enemy’s turn.

I have to admit, I was filled with pride whenever I took a gamble and won against impossible odds. For a handful of times when the game told there was no way I could beat an invading army, through careful tactics and defensive strategy, I was able to eventually turn the tides.

Though at times, I did feel as if these fights dragged on for longer than I would’ve liked. Thankfully, if you’re certain that your army can win a skirmish there is an option for an automatic battle which gets the results immediately so you don’t have to stay for 30 minutes engaging with the enemy. This saved me a lot of time as I didn’t have the patience to sit through all of them. It’s certainly a mechanic that I can appreciate.

I had a good time playing Immortal Realms: Vampire Wars. And if you’re the type who likes slowly building up your army and carefully adapting to unforeseen circumstances, then I can definitely recommend this game to you. However, I did feel as if the game had a few set backs that prevented me from truly enjoying it. But that shouldn’t prevent you from getting into what this game has to offer.

Immortal Realms: Vampire Wars offers a rich turned based strategy experience which earns my strong recommendation for those seeking a mind challenging and dark strategy game. 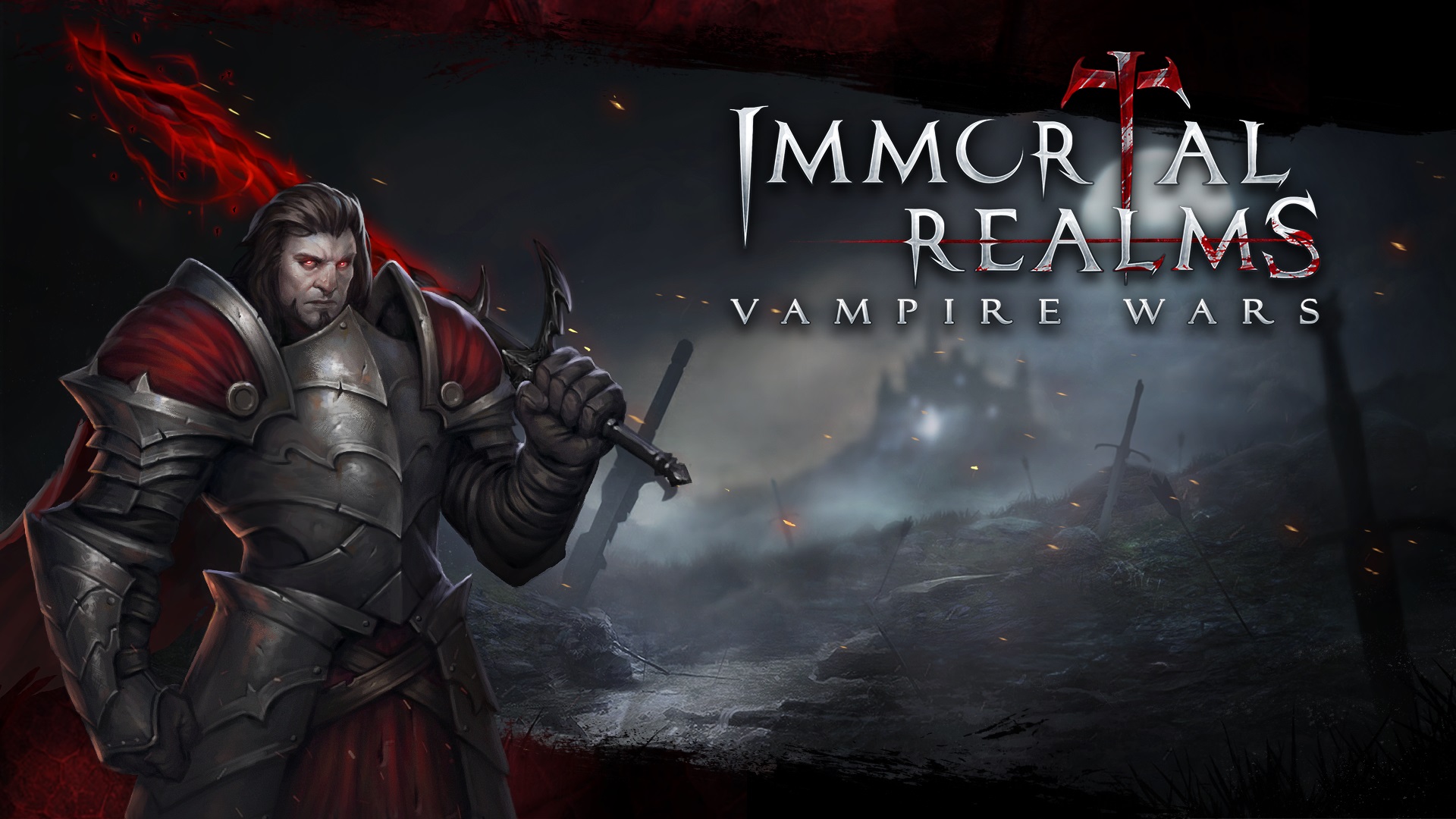 Immortal Realms: Vampire Wars – Review
Score Definition
When the issues of a game are rolled and stomped by its greatness, then it’s something to invest on if you have some spare.
Pros
Brutal Dark Turned Based Strategy
Flexible Gameplay
Intense Decision Making
Cons
Drops In Frame Rate
Lack Of Mouse and Keyboard Support For Console
Outdated Graphics
8
Great