A man looks back on his past. He has seen enough death to last him a lifetime. It drives him insane, but a moment of clarity was all it took for him look for another reason to live. He decides to do away with his former life and musters the will to move on. Casting aside the sword, the former Samurai picks up the brush and fights for those he loves. Little does he know his creator looks over him and intends to see him suffer. 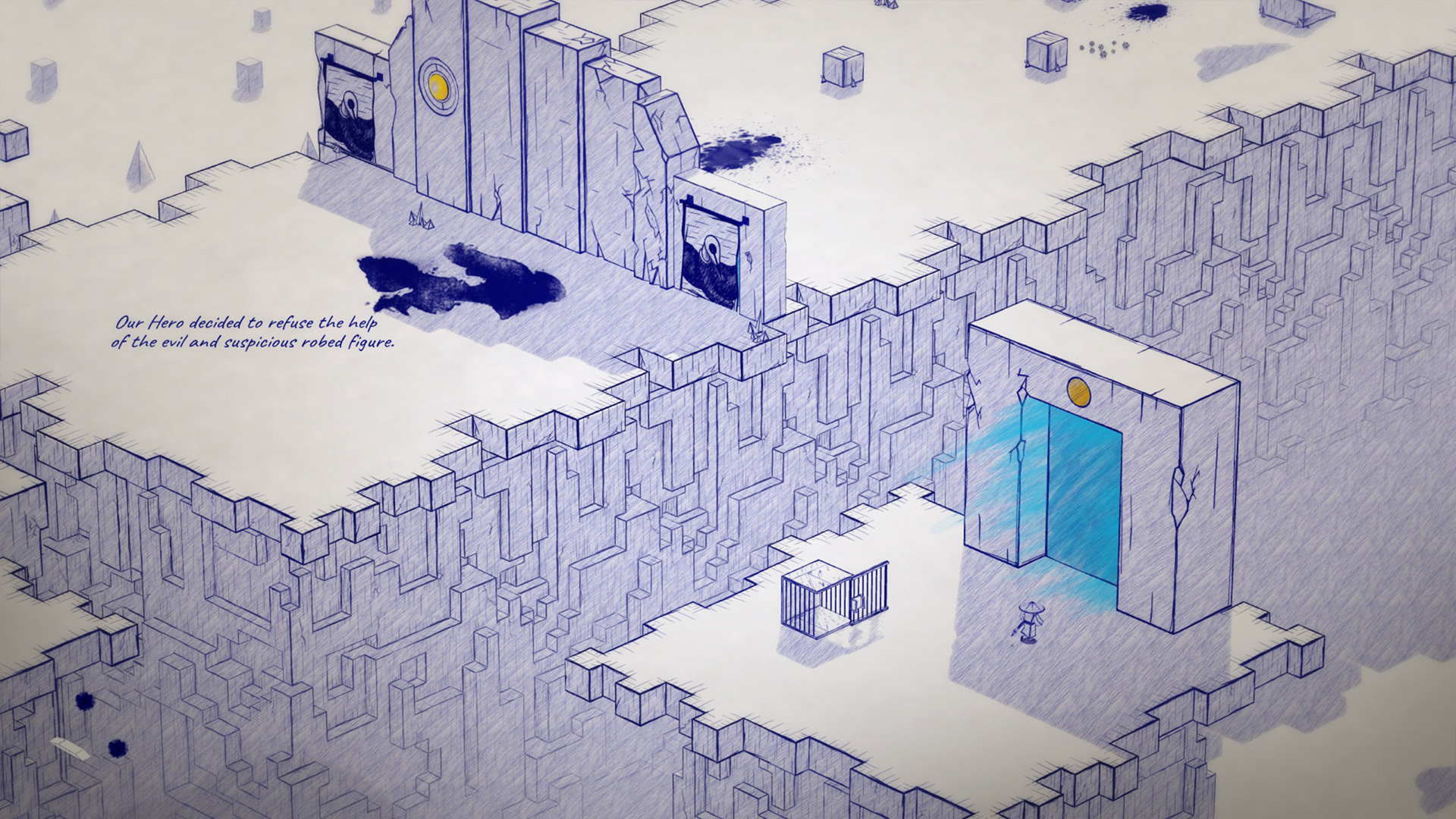 Inked is a puzzle-platformer where you play as a ronin created from the mind of comic book artist, Adam. As the Nameless Hero, you must venture through Adam’s world to save your lost love, Aiko. You are armed with a brush that allows you to create geometrical shapes for the purpose of solving all kinds of puzzles. During the journey, both Adam and the Nameless Hero will get to know each other on an emotional level and find out why they do what they do. 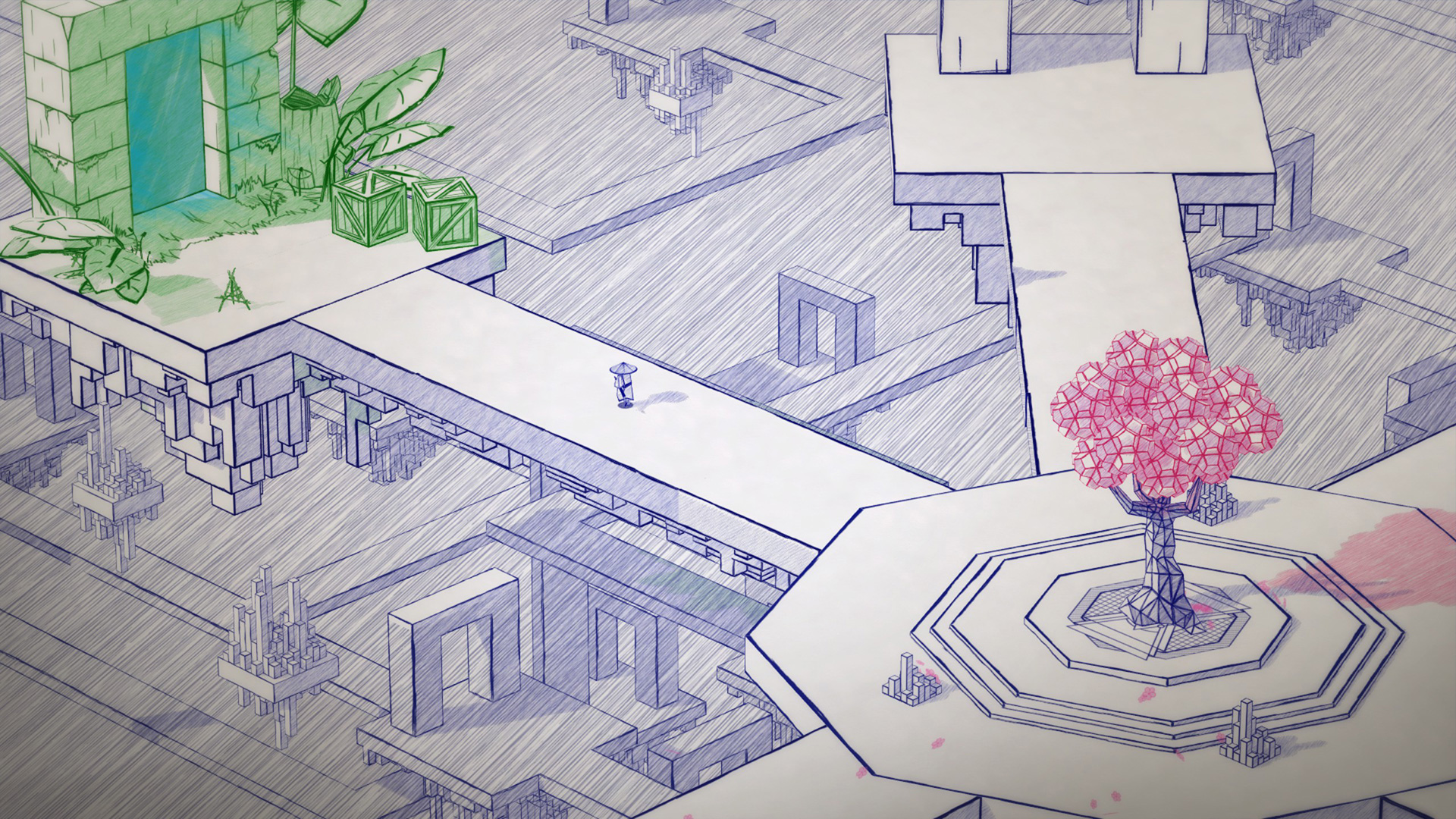 At its core, Inked is all about using ink to create shapes to use as tools for solving many puzzles of the game. Many of these shapes are used through the entire game, with the exception of one situational shape. You can create 3 standard shapes at a time using the ink you have in reserve. You will need to destroy previous shapes in order to create more. During your journey, you will also find special ink that affects the world in some form or another. The only catch is, you can only create one instance of these special shapes. So choosing when and where to use them is very important. You control the Ronin by way of WASD. It takes some getting used to as the primary direction of progression is usually diagonal instead of up or right.

One of the biggest selling points of this game is the art style. From the outset, it may look simple and unappealing, but a few minutes in, you will begin to notice that the world of Adam is alive and vibrant. You start your adventure on the edge of a forest. By journey’s end, you will have gone through several locations, each having a unique theme that demand even more use of ink to traverse. Each location has a puzzle element unique to its region, which bodes well for puzzle variety. Going into each area, expect different win conditions and plenty of “Aha” moments when all the pieces fall into place.

Almost all the locations are populated with shadow people. These are people who have shunned the ronin for abandoning his duty to the lord and land. The only other person who interacts with the ronin is a mysterious figure who pops up from time to time. At first, he may look like some kind of troublemaker, but he proves his worth as a helpful guide to the Nameless Hero when the time is right. The game has one side quest to note – the caged birds. Completely optional, most caged bird puzzles take some real problem-solving. There are times when it is better to walk away and mull over the solution than to frustrate yourself by not making the right combination of shapes. 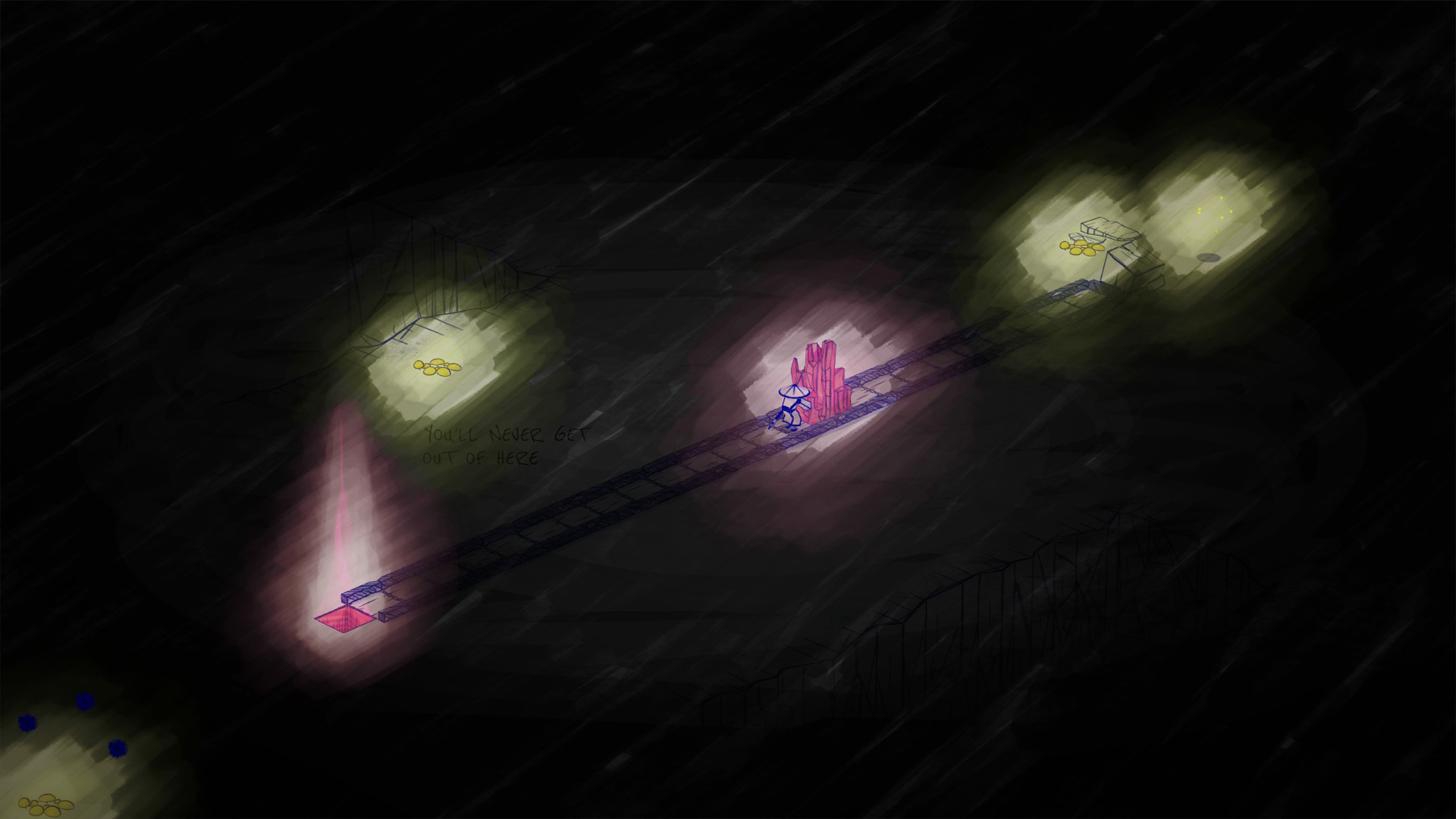 The only issue I have with this game is with its camera. For example, I want to place a block on the floor. I have an easier time setting it down in places that face the upper right. If ANYTHING is obscuring the camera, no matter how small it is, placing the shape down becomes so much harder. I need to carefully move the mouse around until the build grid is in the exact place I want it to be.

The problems extend to the platforming aspect of the game as well. Movement takes some getting used to. There is a slight delay in which the character model continues moving the moment the key has been released. Often times it’s not noticeable, but in platforming segments, these few frames can mean the difference between completing a jump or falling into oblivion. The issue here is that sometimes it may look a perfect jump, but in reality, the object on approach is one block away because the camera makes it “look” like the pieces are aligned.

The hand-drawn art style is what will initially draw the attention of people. The world is laid out beautifully, with almost all parts of it carefully positioned as to give each every piece a purpose. If it doesn’t serve to enhance the scene in any way, it can definitely be used to solve the many puzzles of the game. Who knows? That one lonely box hanging out in the corner may have something hidden underneath it. After the art draws people in, it is the story that hooks most people into seeing it through to the end. The journey with the Nameless Hero and Adam is a heartfelt one. What starts off as a tale of vengeance and self-destruction, ends with a deeper understanding of strength and knowledge of self.

Another highlight of the game lies in its boss battles. Or should I say, the moments when your creator becomes impatient and decides to draw something that will reduce you to an ink splat. It takes some quick thinking to make it past these parts as a number of them combine your ability to create shapes on the fly and your platforming skills. 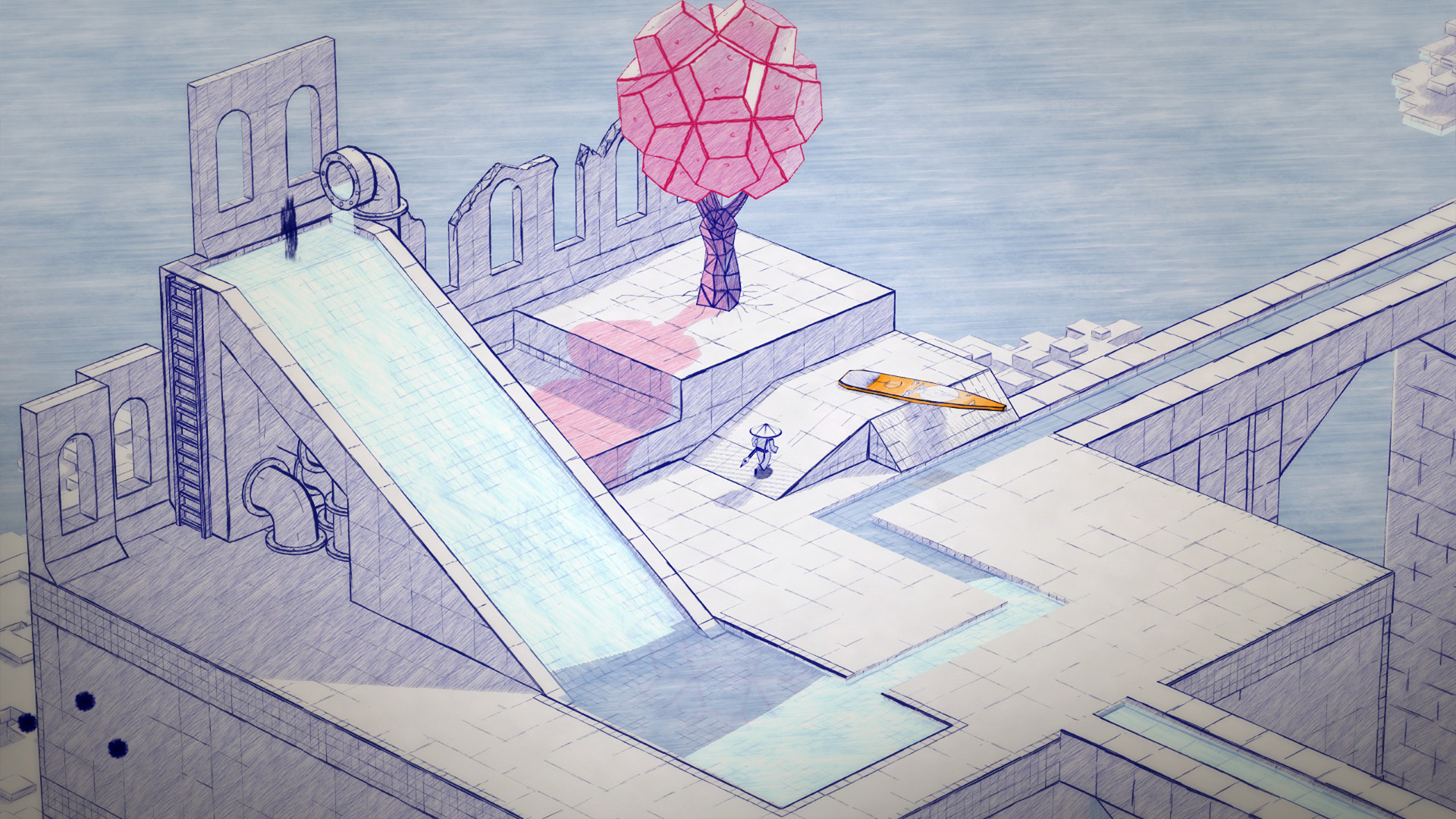 The slight issues may seem like a deal breaker for some, but truth be told, the good outweighs the bad by a mile. The story and the art style will keep gamers going despite some puzzles appearing to be unsolvable. It just takes a bit more patience to get the most out of this game. All the puzzles in the game are solved by a combination of the shapes. There are no exceptions. As a gamer, sometimes it is better to take a step back and consider the options instead of giving up trying to force a solution that might work. And because of this, I can safely recommend this game to people who enjoy a good story, solving puzzles, and to those who are into precision platforming. 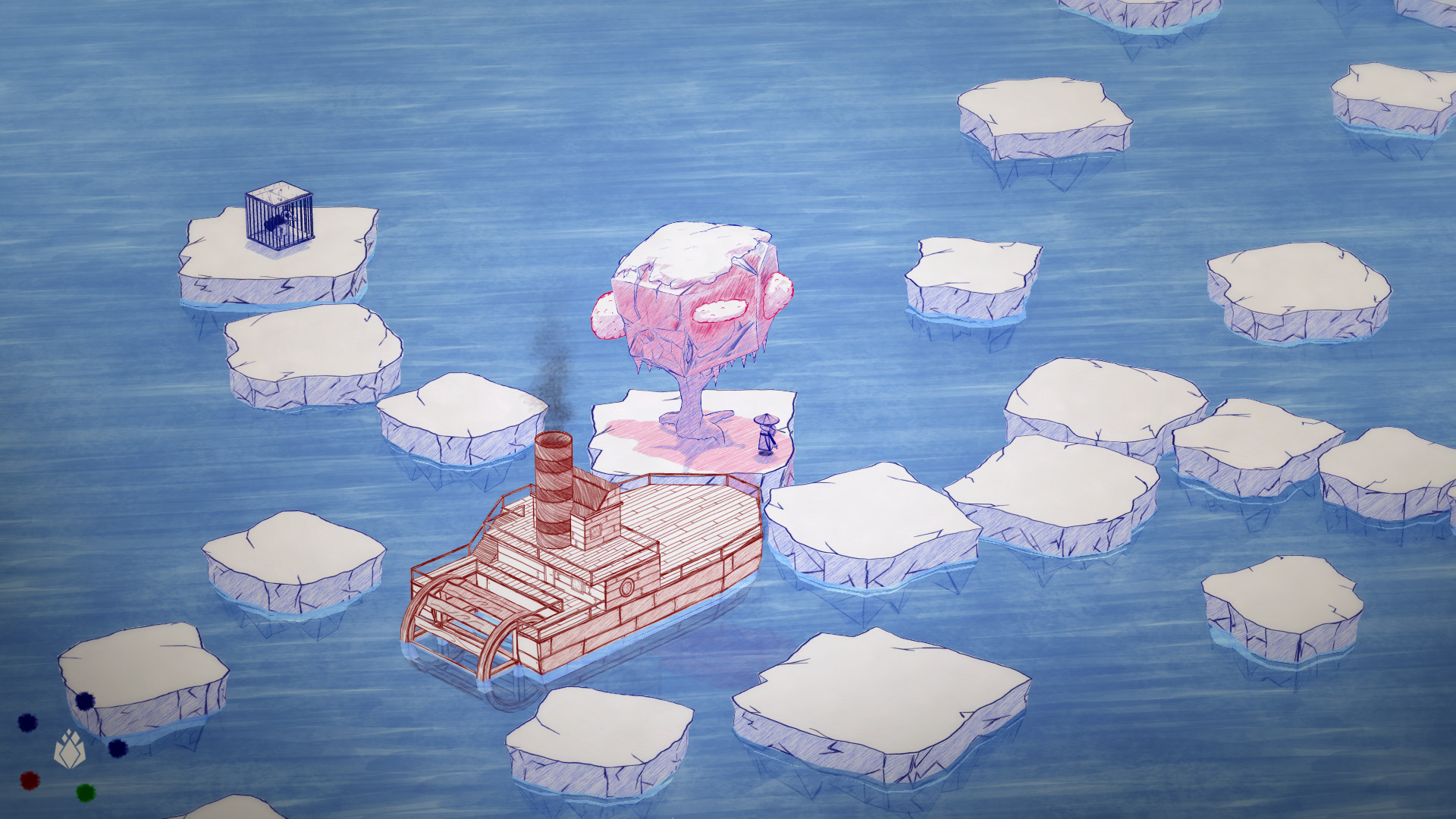 Inked - Review
Score Definition
When the issues of a game are rolled and stomped by its greatness, then it’s something to invest on if you have some spare.
Pros
Engaging story
The hand-drawn art style
Unique boss fights that require fast thinking and a steady hand
A wide variety of puzzles to solve
Cons
The camera makes it harder to place shapes at certain angles
Loose build grids
The camera makes platforming a little harder
8.4
Great