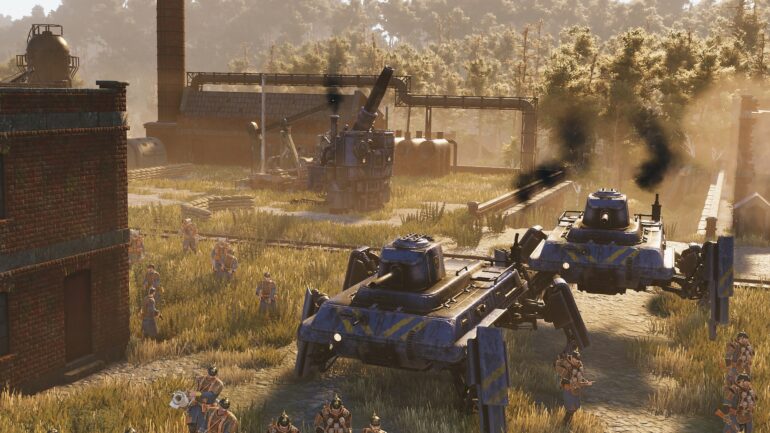 The alternate history and its diesel punk inspired world have seen over 21.000.000 mechs ravaging on the battlefield, capturing over 2.000.000 resource buildings. Out of the three factions, Saxony sees the highest pick rate, with Polania being a close second and Rusviet coming in as number 3. When it comes to Heroes, Polanian girl Anna and her paw swinging companion Wojtek seem to be the most favourable out of all heroes, taking the number one spot.

Keeping the diesel engines in check the team has released six new maps since the game’s launch on Sept 1st 2020 launch on PC. Ranging from a once bustling Harbor City to the no man’s land of the Great Wastes. New challenges, each unique in setting and strategic options, have been added as part of the first season alongside the highly anticipated ranked mode which sees players climbing the ranks of Iron Harvest.
As a treat for all lore-lovers a Codex was added to the game, compiling all the details and lore to display the deep and rich background of Iron Harvest rooted in the universe of 1920+. Additional cosmetical items, skins and other collectibles have been released during October and will be added to the game regularly in the future.

Drop Zone:
In “Drop Zone” players collect stockpiles that are airdropped across the map. The first player to collect enough Victory Points wins!
Multiple stockpiles can drop simultaneously and take time to collect. Protecting dropped stockpiles while securing future drop zones are the key to victory.
Drop Zone will be available on all existing skirmish maps and can be played in Skirmish, Ranked, Quick Match, and custom matches.
The team is in close touch with the community and are constantly working on weekly updates to keep the battlefield exciting.

Rusviet Revolution:
Over 100 years ago the real Russian revolution came to a halt when the red forces one the final battles at the Krim. Though the alternate history of 1920+ never has seen this kind of revolution till now. December 17th marks the day the Rusviet people will raise against the Tsar. Players will follow an additional story line over the course of four new singleplayer maps, shedding some light on the mysterious Rasputin. These Maps will be free for all Kickstarter backers and Iron Harvest Digital Deluxe owners. Everyone else can get the “Rusviet Revolution” for 3,99 € through Steam, GOG or Epic.

Free Public Demo:
Starting November 25th ending December 1st, all interested players can join the battlefield via a free public demo on Steam, GOG and Epic. Join Anna Kos and her trustworthy bear Wojtek on their journey across Europe in the war that followed the Great War in this alternate history of 1920.  As off now Iron Harvest 1920+ is available for purchase on the Epic Game Store as well.

All players (including the free public demo users) will be eligible to participate in the Iron Harvest Fall Tournament and will receive an in-game skin and an exclusive title.